The Democracy-Promotion Industry Is Adrift 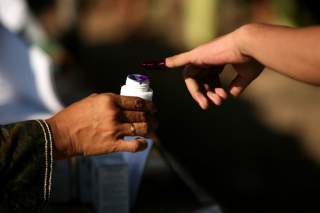 Walter Russell Mead was animated. “Just let a couple of English-speaking liberals tweet and we get all soft and fuzzy and excited and”—his voice rising to a pinched falsetto, his hands flapping enthusiastically in the air—“Oh, it’s happening! It’s happening!” He gripped the podium and leaned forward before announcing—“It probably isn’t. And something much uglier probably is happening.”

Mead, a professor at Bard College and editor-at-large of the American Interest, was speaking at an all-day conference called “Re-thinking Democracy Promotion Amid Rising Authoritarianism” that was sponsored by the American Interest, Freedom House—which receives funding from the U.S. Congress and, in turn, seeks to influence it—and John Hopkins-SAIS. Mead had been telling an attentive audience in SAIS’s Paul H. Nitze building about the long, difficult road facing those who have attempted to transform their countries into democracies—a road which has often led nowhere—and contrasting it with the unbridled enthusiasm many in the West develop when revolutions break out. Thomas Jefferson, he noted, had embraced the French revolution—and watched as the guillotine became the enforcer of its vision of radical equality. France, Mead said, wouldn’t have a stable, sustained, and democratic government until ninety years after the revolution. Germany’s apparent breakthroughs in 1848 and 1918 were bookended by the Kaiser and Hitler. Egypt and Russia have been trying to change for centuries. Before they get carried away, “democracy proponents,” he said, “really need to become better historians.”

Mead was right. But it’s not exactly what you might have expected to hear at a conclave of some of America’s top advocates of promoting democracy abroad—especially one whose original invitation starkly declared, “much is at stake, for authoritarian regimes pose a danger not only to their own populations through suppression of human rights but to others as well.” Yet it was a theme throughout the day. These intellectuals may want to shake the world, but they sounded like the world had shaken them.

Authoritarianism has been making gains around the world—gains that have often followed apparent democratic openings. The Thai government was just deposed. Egypt’s revolution has come full circle, with another military dictator taking the reigns amid mass arrests and the suppression of the country’s largest opposition movement. Ukraine is in turmoil. Argentina and Turkey drift toward authoritarianism. The European far right is flexing its muscles. China passes over the twenty-fifth anniversary of its greatest crackdown in silence; Bashar Assad continues his, with no end in sight. And power continues to congeal in the Kremlin. The flood of democratization that took place after 1989, in other words, may be long past its high-water mark.

But for the democracy-promotion industry things are even tougher than that. It’s still swimming in federal cash, of course. But it’s also facing a new level of scrutiny and resistance abroad. The Russian government has made a point of designating some of the democracy industry’s clients as “foreign agents.” Egypt has imprisoned them. And around the world, they face red tape and red lines—don’t talk about democracy, talk about “civil society.” Don’t brag that you got that money from America.

Daniel Calingaert of Freedom House hinted that a shift had taken place. The 1990s had been the golden years for the industry. The captive nations of Eastern Europe and Cold War caudillates around the globe were now free to pursue their own destinies. “Most countries, they wanted to become democratic, or they said they did, and we just went over there and provided know-how.” How do we run an election? How do we make our bureaucracy more effective and more efficient? But once these low-hanging fruits were gone, things changed. “By the last decade,” he lamented, “it started getting more contentious, and authoritarian leaders like Putin were pointing to the color revolutions and starting to think ‘How do we stop this from happening in [our] country?’” He added, “What we are seeing now is...a full-on assault by authoritarian governments on democracy-assistance programs...There are roadblocks every step of the way.”

Well, yes. At SAIS, after a panel that featured a swath of former George W. Bush administration officials, a reporter for the Russian state media organization RIA Novosti stood up and asked the panelists whether America wanted a color revolution in Russia, and whether they thought America would benefit if such a revolution led to a Russian civil war. The panelists demurred, but the questioner’s intent was obvious: to get a sensational quote that Moscow might use to advance its own narrative and its own interests. Later, David J. Kramer, the president of Freedom House, declared that the Bush administration’s Russia policy did not consist of “finger-wagging” but that he wished it had. Kramer was long on fulgurations about the nasty state of Russia, but short on actual proposals about what could, or should, be accomplished by U.S. policy.

In sum, it was hard to avoid the sense that the democracy-promotion industry is looking aimless and weak. Yet while its leaders are unsure what to do, they are confident they’ll keep getting the money to do it. Panelist after panelist noted that while European development efforts faced budget cuts, the overall U.S. development budget—and the democracy-promotion budget within it—has held steady after the recession. The state of the world may be bad, but the going for democracy promoters remains good, at least when it comes to doing well financially.

Take Carl Gershman, president of the congressionally funded National Endowment for Democracy, which sits at the very nexus of America’s democracy industry. He made the remarkable observation that Congress is not too concerned about results, and that the key to maintaining funding was instead getting foreign activists to connect personally with members of Congress. What’s more, Francis Fukuyama, who announced nothing less than the end of history in The National Interest in 1989, stated that he continued to believe that democracy was the wave of the future but acknowledged that in the short-run, “we’re going to have real foreign-policy problems at both ends of Eurasia.” For all the conference’s promises of a “re-examination of democracy promotion, the threats it faces, and how best to advance it,” the real message seemed to be that the promoters themselves are becoming somewhat unsure about how to ensure any fresh advancements.