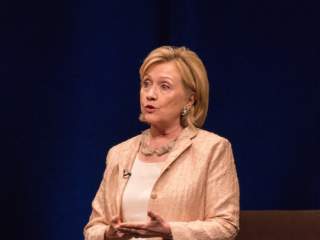 It’s beginning to look as though Hillary Clinton actually worked in the Obama administration. For months Clinton has tried to draw distinctions between herself and President Obama, mostly on foreign policy issues such as Russia and Syria, claiming that she would stake out a harder line than the president. Now, during last night’s debate in Charleston, South Carolina, Clinton performed something of a U-turn. She did everything in her power to wrap herself in the mantle of Obama, the very man who deprived her of the nomination in Iowa in 2008, which was a shrewd move if you think that Obama’s popularity ratings will continue to rise and believe that the economy will continue to improve—both big ifs. But will Clinton’s move be enough to stop Senator Bernie Sanders, the tribune of the left-wing of the Democratic party, from snatching the nomination from her?

It’s self-evident that Clinton is on her last go-around, which is why she earlier even wheeled out her daughter Chelsea to take a swipe at Sanders on healthcare. She bashed Sanders for his equivocal record on gun control and depicted him as endangering Obamacare. She declared, “he has voted with the NRA, with the gun lobby numerous times.” When it came to healthcare, Clinton went much further, suggesting his new “Medicare-for- all” plan would jeopardize Obamacare. Sanders launched into a dithyramb about the greatness of the British National Health Service.

If anything, Sanders’s performance last night bolstered his socialist bona fides, down to his fiery rhetorical cadences. The contrast between him and Clinton could hardly have been starker. He said things that he believed were true even if they are false. She said things that she knew were false even if she acted as though they were true. Meanwhile, former Maryland Governor Martin O’Malley occasionally interjected a wonkish statement that was drowned out by the fireworks exploding between Clinton and Sanders.

For Clinton, Sanders resembles some prehistoric creature from the Democratic past that has come shambling out of the bog to confront her. This old-timer is making the nostrums of the 1930s sound vaguely revolutionary again. His formula is simple: everything in the world that is bad gets traced back to Wall Street. Congress is ineffectual? Blame the banks and corporations? Not enough jobs for the young? Ditto. He even seems to blame Clinton’s candidacy itself, a roadblock to his ascension, on Wall Street.

And foreign policy? It was essentially a footnote in last night’s debate. The former secretary of state announced she had a “three-point plan”—why not four?—to crush the Islamic state. For his part, Sanders sounded like Senator Rand Paul, warning against a “quagmire” in Syria. If he had wanted, Sanders could have hit Clinton much harder on her foreign policy record in Iraq, Syria and Libya, though he did declare that he led the fight (such as it was) against the Bush administration’s 2003 Iraq War.

What the debate revealed mostly was that the Democratic party remains far more unified than the GOP. There were no fundamental differences between Clinton and Sanders on the goals they want to achieve. Instead, it was about incremental change versus the more radical steps Sanders advocates. The tonal differences between them are stronger than the substantive ones, but the media will do everything it can to build up Sanders and try and create some excitement around the Democratic race.

But there is a personal aspect to the struggle for Clinton. Sanders wants to redeem America from big business. Hillary, who keeps getting assailed with questions about her husband’s personal peccadilloes, wants personal redemption for the Clinton brand.

This is what Jeb Bush was supposed to provide for his family. Unlike Clinton, however, he’s flamed out. If there is a restoration of a dynasty this year, it will take place among the Democrats, not the Republicans.