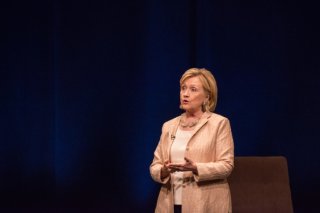 The first Democratic debate featured two former Republicans among the five candidates. Jim Webb had served in the Reagan administration; Lincoln Chafee had been a Republican senator, among the last of the party’s Northeastern moderates. Both became Democrats largely because of the Iraq War, which Chafee had been the only Republican senator to oppose in 2003 and which was the impetus for Webb’s successful 2006 Senate bid as a Democrat. The George W. Bush administration’s irrational exuberance in foreign policy had cost the GOP the support of men like these—and the voters who elected them—to the Democrats’ benefit.

When the candidates gathered on stage at Drake University in Des Moines for the second debate on Saturday, Webb and Chafee were not among them. The narrowing of the field to just Hillary Clinton, Bernie Sanders, and Martin O’Malley could be seen as a proper refocusing on the true-blue Democrats running for the Democratic nomination. (Provided one overlooks Sanders’s career as an independent—he’d never caucused with Republicans or served in a GOP administration, at least.) But symbolically the absence of Webb and Chafee seemed appropriate at another level: based on what the remaining candidates had to say, it seems the Democrats are eager to forfeit whatever gains they accrued from the Bush administration’s mistakes. Clinton, Sanders, and O’Malley all presented incoherent responses to the Paris attacks that had occurred the night before—Sanders, in fact, answered a question about the Paris atrocities by reciting his standard populist/socialist talking points, with only the briefest of comments about ISIS. On domestic policy, the three candidates engaged in a bidding war throughout the night to see could promise the most government intervention in the economy. Private job-creation was largely off the table—for the Democrats of 2016, prosperity comes from wage controls and regulation.

Sanders and O’Malley slammed Clinton for falling short of their commitment to a $15 per hour federal minimum wage. Clinton would only go as high as $12 at the federal level, though she hoped states would experiment with higher figures. Sanders and O’Malley had similarly simplistic proposals for the top end of the economy—both proposed bringing back Glass-Steagall and breaking up the big banks, leaving Clinton again scrambling to come up with a position to occupy both the left and the center. She cited Paul Krugman’s support for her plans for banking regulation and Paul Volcker’s opposition to reinstating Glass-Steagall, before conceding, “Reinstating Glass- Steagall is a part of what very well could help, but it is nowhere near enough.”

Attacked by Sanders for accepting “huge amounts of money from oil, from coal, from Wall Street, from the military-industrial complex,” Clinton invoked 9/11 to justify her coziness with financial interests: “We were attacked in downtown Manhattan where Wall Street is. I did spend a whole lot of time and effort helping them rebuild. That was good for New York. It was good for the economy and it was a way to rebuke the terrorists who had attacked our country.”

Clinton got an opportunity to outflank Sanders from the left, however, when the discussion turned to gun control. She and O’Malley hammered the Vermont senator for voting to protect firearms vendors and manufacturers from lawsuits.

Sanders could only plead: “I believe coming from a state that has virtually no gun control, I believe that I am in position to reach … what we need to do is bring people together to work on the agreement where there is broad consensus and that's what I intend to do.” While Republicans get widely criticized for their emphasis on ideological purity, neither Clinton nor O’Malley seemed prepared to concede anything to Americans who don’t support their line on gun-control, and Sanders was embarrassed to defend his own heterodoxy.

This was a debate pitched purely to the Democrats’ base, and to the left-wing of the base at that. Clinton may see a winning general-election strategy here, however: in her closing remarks she said, “all of us support funding Planned Parenthood. All of us believe climate change is real. All of us want equal pay for equal work,” three ideologically charged positions that might be effective wedge issues against the Republicans. But will voters next November be more concerned about Planned Parenthood than jobs?

And will they be more concerned about climate change than ISIS? Bernie Sanders evidently is. Asked whether he still believed climate change was the nation’s greatest national-security threat, he doubled-down: “In fact, climate change is directly related to the growth of terrorism. And if we do not get our act together and listen to what the scientists say, you're going to see countries all over the world—this is what the CIA says—they’re going to be struggling over limited amounts of water, limited amounts of land to grow their crops ask you're going to see all kinds of international conflict.” One need not ignore the effect that climate can have on conflicts to boggle at the idea that climate change is the country’s top national-security problem right now.

But Sanders and his rivals did not know whether they wanted to be hawks or doves on Saturday. Though mostly ignoring the question about the Paris attacks, he addressed the subject long enough to say, “Together, leading the world, this country will rid our planet of this barbarous organization called ISIS.” Hillary Clinton surprised in the other direction, saying bluntly, “this cannot be an American fight, although American leadership is essential.” She defined America’s role in combating ISIS in terms of the Obama administration’s current policies, with “troops in Iraq … helping to train and build back up the Iraqi military” and “special operators in Syria working with the Kurds and Arabs, so that we can be supportive.”

O’Malley rejected Clinton’s formulation: “This actually is America's fight,” he said, though “It cannot solely be America's fight.” In fact, O’Malley, Sanders, and Clinton all agreed that international coalitions, including regional Muslim states, should the means by which ISIS is fought. But details were lacking. Which of the region’s larger powers—Saudi Arabia, Turkey, Iran—do the candidates envision taking the lead? Which European allies have the capacity to undertake a Middle Eastern war and, inevitably, postwar occupation? The Democratic candidates want war as much as the Republicans do—but they have an even less clear idea of how it can be fought and won. The Republicans at least know who will do the fighting, inevitably.

Neither Sanders nor O’Malley landed an effect blow on Clinton all night, and quite possibly O’Malley’s more focused attacks on Clinton will draw progressives unhappy with her away from Sanders as their preferred alternative. But more likely the status quo will remain unchanged: Hillary Clinton is heir apparent to the nomination, and the only effect Sanders and O’Malley are having is to draw her and the party leftward. This leftward drift hardly helps to clarify anyone’s policies, however—Clinton, O’Malley, and Sanders are dealing in fantasies, not serious proposals, whether good or bad, left or centrist. They want ends whose means they are unwilling to contemplate.