The Disturbing Legacy of the Ukraine Crisis 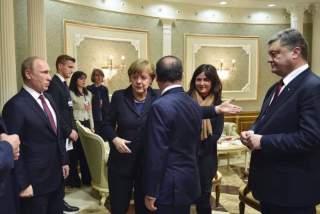 The new Minsk agreement is mainly a product of Europe’s fear of war and Ukraine’s rapidly deteriorating military, economic and political condition. The Germans and the French were jolted into action by the prospect of the United States arming Kiev, provoking Moscow to rise to a new level of confrontation. Ukraine’s leadership had to choose between the Scylla of making a bad peace and the Charybdis of continuing a losing war. As for the Russians, freezing the conflict along the lines of engagement and making the “people’s republics” safe from enemy fire was the best option available.

Whatever happens next—there is still uncertainty over the prospective cease-fire—is unlikely to produce a settlement to the Donbass conflict, much less for the larger issue of security in Europe. At best, it is likely to be a truce, hopefully a lasting one, but offering little prospect of (re)integration in Ukraine or reconciliation on the continent as a whole. Indeed, the truce will legitimize new divisions—along the cease-fire lines in Donbass and the NATO-Russia quasi–front line in Europe. There will be no new Iron Curtain, to be sure, but communication between Russians and Westerners has already become difficult, with members of the policy communities essentially talking past each other, as the public exchanges during the recent Munich Security Conference have demonstrated.

The truce could be tested by various actors: the rebel republics seeking to gain control over the part of Donbass under Kiev’s control, including the port city of Mariupol; Kievan elites using the war as an excuse not to implement reforms that run counter to the vested interests; political and paramilitary forces in Ukraine losing faith in their weak and ineffectual government and attempting to replace it; Russia trying to use the new turmoil in Ukraine to achieve the triple goal of permanent neutrality, federalization and official Russian-Ukrainian bilingualism; the United States giving Ukraine lethal weapons and Europe failing to give it economic and financial relief. Things could go badly wrong.

The Minsk truce will not end confrontation, but rather recognize it. It will not necessarily prevent further escalation, but might postpone it. The Ukraine crisis has deep roots on both sides of the new divide, and is a culmination of fundamental differences, primarily between the United States and Russia, which could not be reconciled. The largely cooperative European order that existed from 1989 till February 2014 is history. Today’s situation, however, is not a throwback to the Cold War standoff. Things are now much more fluid, there are so many more dimensions to watch besides the military conflict: economics, energy and finance; domestic politics and popular movements; global balances to include non-Western heavyweights—all in an information environment that has become an intensely contested battlefield. The world disorder that so many pundits talked about for years has finally arrived in Europe.

This new reality will last awhile. Hard to say how long, and even harder to predict in what direction it will evolve and where it will end. Traditional balance-of-power calculus can be misleading. Most important developments will probably happen inside countries, rather than among them, but these will have a decisive impact on international relations. Ukraine is exceedingly brittle. Russia is battling a severe economic crisis. Europe is facing a host of problems. U.S. global leadership is in question. Minsk is neither a new Yalta, nor a new Helsinki, but it’s worthwhile to work hard to make sure that the shaky truce, if it takes hold, does not founder, leading to a broader war and thus raising the scale and scope of European disorder.