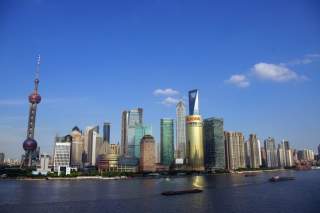 “Eye-popping.” That’s how David Dollar of the Brookings Institution described a recent Conference Board report predicting the Chinese economy would grow at only 3.9 percent between 2020 and 2025. Also stunning is the forecast of former Treasury Secretary Larry Summers. Summers and co-author Lant Pritchett, both at Harvard, coincidentally believe China will experience 3.9 percent annual growth over the next two decades.

China’s official National Bureau of Statistics estimates that the country’s economy expanded 7.7 percent last year. It’s hardly surprising, therefore, that Nicholas Lardy of the Peterson Institute described 3.9 percent growth, in the words of the Wall Street Journal, as “too gloomy.”

Despite what virtually everyone thinks, the 3.9 percent figures are wildly optimistic. China, at the moment, is in fact growing in the low single digits, if it’s growing at all, and it is heading into one of the biggest debt crises in history, if not the biggest. The shock of a Chinese collapse will roil the global economy. “China Is Very, Very, Very, Very Big,” Bloomberg noted last week, so when it falls the consequences will be very, very, very, very catastrophic.

How fast is China growing? The place to start is the official position of Li Keqiang, who as premier is in charge of the economy. In a speech last October, he said each percentage point of growth of gross domestic product produces 1.4 million jobs. Applying Premier Li’s formula to 7.7 percent growth, China should have created 10.8 million new jobs last year.

So how many jobs were in fact created in 2013? China’s Ministry of Human Resources and Social Security has the official number: 2.73 million.

Despite almost nonexistent job creation—a 0.36 percent increase in 2013—Premier Li is not worried. In September at Davos, he said that in the first eight months of this year, China had created 10 million new jobs. If we take him at his word—1.25 million new jobs a month—it means this year China will create more than five times the number of jobs it created last year, even though the economy is now growing slower than last year. NBS reports that in the first nine months of this year, the economy expanded 7.4 percent, well down from 2013’s pace.

The 7.4 percent number is surely an overstatement, however. Electricity consumption, considered by many to be the most reliable indicator of economic output, was up only 3.9 percent for the first nine months of this year. Because the growth of electricity usually exceeds the growth of gross domestic product, the 2.0 percent number from Premier Li’s formula for last year looks close to the mark for this one. And electricity numbers have probably been artificially inflated upward, as they have in the past, according to the New York Times.

Analysts try to dismiss low electricity numbers by saying that the Chinese economy has transitioned away from manufacturing, where electricity is a good indicator of output, to services, where they believe it is not.

Let’s assume their contention is correct, even though manufacturing accounted for a still substantial 44 percent of the economy last year. Services, however, seem to be in trouble as well. Manufacturing services—freight and logistics—have to be stagnant because manufacturing is stagnant. Property, a main component of the services sector in the last several years, is headed for trouble with construction starts down 9.3 percent for first nine months of the year. They were up 13.5 percent in the same period in 2013.

Optimists also say that consumption is the great hope for the Chinese economy, but consumption appears to be falling. The key to understanding consumption is retail sales. NBS says such sales were up 12.0 percent in the first nine months of the year, but the official number, which is thought to include unsold inventory and government procurement, does not correlate with activity in the stores, especially the same-store sales of retailers with audited financials. In Walmart’s second quarter, its most recent reporting period, the international division had same-store sales growth in every country except China. Other retailers experienced falling same-store China sales in Q3, the just-completed calendar quarter.

Another good indicator is the plight of the manufacturers of consumer products. The revenues of Chinese consumer products companies in the second calendar quarter of this year, according to Anne Stevenson-Yang of J Capital Research, were down 6 percent from the same quarter last year. Unilever reported that its China sales fell “around 20 percent” in Q3.

The situation would have been even more pronounced except retailers cushioned the blow for consumer products makers by taking easy credit from them and carrying excess goods in their warehouses. Retailers whose shares are listed in Shanghai are holding about 600 days of inventory. And manufacturers are also amassing big piles of goods in their warehouses. Stevenson-Yang reports that at the end of Q2, distilleries listed in China held an average of 876 days of inventory; soft drink companies were at 216 days and footwear makers at 255 days.

Shelves are groaning under the weight of unsold goods. Just about every industry in China is about to hit a wall of inventories, meaning they will have to stop producing, because they will no longer be able to carry their excess production. When that happens, manufacturing will slow precipitously. The process looks like it is already beginning: Unilever blamed its plunging China sales in Q3 on “trade destocking across the distribution channels.” In all probability, the company is now manufacturing less for its China market in anticipation of a poor Q4.

It is just about impossible to reconcile official retail sales numbers with the “persistently frugal consumption environment” in China that Carrefour, the French retailer, noted in reporting Q3 results, yet it ultimately does not matter whether official statistics are overstated or not. Even if China were growing as fast as it claimed, its claimed growth would be insufficient to pay back debt.

China, to stimulate growth, is now accumulating debt at about a 15 percent clip and perhaps faster. Faster? There is a growing recognition that debt is being created in channels not measured by central-government statistics. Local governments, for instance, are now issuing IOUs off-the-books, and companies are lending to each other in hard-to-spot ways, by using debt-like instruments for payment for instance.

And it is not only the rapid accumulation of indebtedness that is of concern. It’s the stock of debt. Today, total country debt is probably more than 300 percent of gross domestic product when GDP is properly stated. That’s dangerous territory, especially for a developing economy like China’s.

So will there be a crash soon? We do not precisely know how far debt is outrunning GDP, but arithmetic, if nothing else, shows the country is in an impossible situation. The missed payment by Shanghai Chaori Solar Energy Science & Technology Co. in March, the first bond default in the history of the People’s Republic, is a warning, as was the first default in the country’s junk bond market, also that month. If China is to avoid more defaults, it will have to grow fast. And analysts say—correctly—that further growth is dependent on meaningful reform.

Yes, the Communist Party talks about economic reform all the time—as it did at its Third Plenum last November and at the National People’s Congress meeting this March—but Xi Jinping has been in charge of China since November 2012 and has implemented almost no reforms. In fact, on balance, his China has marched backward with, among other things, his intensified attack on foreign companies, his increase of subsidies to state enterprises, his forced consolidation of state businesses, and his resort to even more state stimulus to keep the economy growing. Unfortunately, state enterprises and other entrenched interests have become politically powerful and are now blocking change that would reduce their monopolistic or quasimonopolistic advantages.

Observers make the argument that we don’t have to worry, because Beijing technocrats dictate outcomes and they would never permit a crash. Chinese technocrats do dictate outcomes, but that is precisely why China is now heading to calamity. Because Chinese political leaders have the power to prevent corrections, they do so. Because they do so, the underlying imbalances are becoming larger. Because the underlying imbalances are becoming larger, the inevitable correction will be severe.

Recessions, which Chinese rulers abhor, allow adjustments to be made while they are still relatively minor. The last year-on-year contraction in China’s gross domestic product, according to the official National Bureau of Statistics, occurred the year Mao Zedong died, 1976.