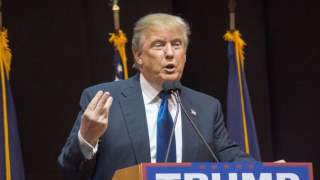 Trump is raising serious issues that deserve to be debated. How precisely would he pursue his vision at a practical level, and how would he minimize the negative, perhaps unintended, consequences of his proposals?

Achieving greater burden sharing and focusing our alliances on current threats would be positive. However, the challenge is how to achieve this goal without shaking confidence in the United States. It is clear that our current approach has not achieved the right balance both on updating the alliances and on burden sharing. But there is the risk that undermining confidence in the United States and its alliances could produce scenarios such as renationalization of security policies by great powers, similar to the situation before World War II, including the nuclearization of allied countries.

Trump has expressed sympathy, if not outright support, for nationalist forces in Europe. But he has not explained how these trends will redound to the benefit of the United States. It would not serve U.S. interests for the next administration to exacerbate xenophobic sentiments on the Continent through protectionism and incendiary rhetoric about burden sharing.

Revisionist powers such as Russia and China would become more aggressive as U.S.-led alliances weaken because they lose credibility. What would a Trump administration do to minimize such threats?

Even with a more accommodating policy toward Russia, we have to avoid undermining relations with European allies and compromising the sovereignty of states such as Ukraine and Georgia. Far from being a pathway to U.S.-Russia cooperation, there is the risk that the Trump Doctrine’s step back from Ukraine could open the door to further incursions by Russia against its European neighbors.

Given the current Chinese leader’s push for regional hegemony, the United States needs a balance of power approach in Asian security—with Japan, India, Vietnam and other regional power playing a balancing role and the U.S. as the ultimate balancer. How would a Trump administration engineer this balance?

After World War II, the United States underwent a paradigm shift in its foreign policies—remaining deeply engaged in unstable regions to maintain great-power peace. To develop the details of this new paradigm, the Truman and Eisenhower administrations developed some of the most important internal and external institutions of the Cold War era. They also engaged in bipartisan deliberations involving leaders of both the executive and legislative branches, drawing on expertise from inside and outside of government. Such a process to arrive at a bipartisan consensus is necessary regardless of who becomes our President.

Trump’s critique of free trade has its merits. It takes inordinate time and expense for American firms to document and litigate unfair trade practices such as dumping under the current process. The risk is that by the time they secure a judgment, their mercantilist competitors have harmed them irreparably. And there has been no response to the problem of currency manipulation. However, Trump needs to articulate how he would design a more effective enforcement process for trade agreements and how he would avoid rounds of tit-for-tat retaliation leading to trade wars. As many have said, America has 5 percent of the world’s population, and its prosperity depends on selling to the other 95 percent.

On immigration, it is certainly time for a review of not only whom we allow into the country, but who especially we wish to attract—the best and the brightest from around the world and individuals who subscribe to America’s core values. An updated immigration strategy is required, and control of the border and who comes to the country is also a must, as is developing a system to police visa overstays. The global population movement makes this necessary. We need to work together with our European allies to assist them in developing appropriate strategies for the coming potential flood of refugees and the future of Africa as an urgent matter.

Yet, Trump’s sometimes inflammatory rhetoric has undermined his ability to work with all groups in American society on this question. As a candidate and, if he wins, as a president, he must shed this divisive approach, which is counterproductive to finding the needed consensus on a way forward.

On democracy promotion, I judge that the goal of a democratized world as a long-term objective remains valid. But how this goal is pursued, especially given recent setbacks, is an important question. It needs to be debated recognizing that the process of building an effective liberal democracy takes time – as it did in our own country. The path to open political systems will vary according to the different histories, cultures, and circumstances of our partners. It requires us to work patiently with leaders and societies of aspiring democracies and not to abandon them when they experience setbacks.

On strategy and tactics, perhaps a differentiated approach would be the best. We should emphasize stability and conflict resolution in places such as the Middle East and Africa. We should work to consolidate democratization in other regions such as parts of Europe, parts of Asia and the Americas, where democratic institutions have faltered. Also, it would be beneficial to review whether our institutions involved in democracy building are effective and make the necessary reforms.

On countering Islamist terrorism, notwithstanding his refusal to engage in nation-building and keep to get involved in protracted conflict and policing, Trump has vowed to destroy ISIS within a matter of months. If his intent is to liberate ISIS-held areas such as Mosul in Iraq and Raqqa in Syria, the question is how he will do so. A good option is to follow the Afghan model, embedding U.S. and coalition Special Forces with local fighters and applying significant air power against ISIS targets. However, the question of what happens to the areas liberated from ISIS must be answered. How, without state-building and new power-sharing arrangements in Iraq and Syria, would a Trump administration prevent segments of the Sunni Arab population from gravitating to yet another (and perhaps even more vicious) terrorist group? After all, ISIS is the successor to the terrorist group Al Qaeda in Iraq. There is also the broader question of how to change failed policies in dealing with state sponsors of terrorist and extremist groups such as Pakistan.

Even if we avoid large state- and nation-building projects such as Iraq and Afghanistan, we need to preserve the capacity, acquired at enormous cost based on experience in Iraq and Afghanistan, to assist in limited state building to help friendly forces control territories which have strategic value. Not doing so would mean overlearning the lessons of Iraq and Afghanistan and risk creating vacuums in which terrorists could establish sanctuaries. Such a mistake, in turn, might require a larger intervention and occupation of such territories to root out terrorist forces, as happened after 9/11.

The objective of getting Russia to work with us to defeat ISIS is desirable—but there is no guarantee that Moscow will do so. Previous efforts at achieving U.S.-Russian cooperation by Bush and Obama administrations have not succeeded. What is the basis for Trump’s confidence that he will succeed if and when he is the U.S. president?

It is imperative that the Trump campaign not leave these questions unanswered. This is because Trump’s fundamental critique has merit: America’s challenges at home—driven by unprecedented debt, weak economic growth, racial and class divisions, and growing economic inequality—do indeed threaten U.S. primacy abroad. He has raised these issues in a uniquely provocative manner. His boldness must now be matched with wise solutions.

Trump speaks for millions of Americans with his unfettered attacks on an establishment that has, in fact, made its share of errors. For this, he has been awarded the Republican nomination for president. Now, just three months before his possible election as Commander in Chief, he has our attention. It is time for him to pivot to a more serious dialogue with more details on how to deal with these issues. Regardless of the outcome of the general election, the issues that he has raised and the sentiments to which he has lent his voice are not going away.

Zalmay Khalilzad is a Counselor at CSIS. He was the US Ambassador in Afghanistan, Iraq and the UN. He is the author of a new book: The Envoy: From Kabul to the White House: My Journey through a Turbulent World. St Martin's Press.