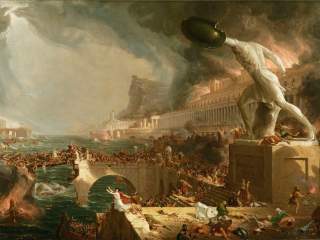 We have scant account of what might have transpired in a session of the Senate apart from Sallust’s. What we learn from it is how important, even crucial, speeches were in shaping the views and votes of the backbenchers. They do not enter the curia, the senate house, with fixed opinions or as members of a party committed to preordained positions. Rather, the senate, on this occasion at least, strikes one as a smaller version of a popular assembly. That may have been an impression Sallust wanted to leave by invoking the parallel with Thucydides. No doubt he also wanted his readers to see the confrontation between Caesar and Cato in the preview of the later struggle on the much larger canvas of the Mediterranean world between Caesar, whose policy was one of extending clemency to defeated foes, and Pompey; once Pompey was out of the way, Cato became titular head of the old-line, rigorist Republicans. In death, he became a hero of the Stoic opposition to imperial autocracy. Beard, however, is so allergic to him that when she cites a remark Cicero made about the city of Romulus, “he was poking fun at one of his contemporaries.” It seems unlikely that many readers will be aware that the contemporary was Cato.

BY EXCISING CATO and the debate in which he figured, Beard passes up a golden opportunity to examine a Roman response to the already classic literature—dramatic, philosophical and historical—of the Greeks. Romans respected and admired it, but were not overwhelmed. Educated Romans were bilingual, but not frozen into mute admiration of the great literary artifacts of Hellas; rather, these opened up imaginative spaces for them. The Catilinarian debate only gains in pungency through its echoes of Thucydides. This is not to say that Romans of Cicero’s and earlier generations could not be utterly dismissive of the living Greeks they encountered on their path to empire. Plautus’s comedies are adaptations of Greek originals, yet Greeks are consistently referred to as Graeculi, or Greeklings, a term of disparagement.

For his part, Cicero, who worshipped Plato and knew Greek literature inside out, could employ vicious ethnic stereotypes to discredit Greek witnesses testifying to the corrupt practices of their Roman governor; he was not above playing to the prejudices of jurors who saw in every Greek a wily con man out to fleece them. In the Aeneid, which imitates and Romanizes the Iliad and Odyssey, Virgil portrays a cunning Greek, Sinon (the name means “harm”), as bamboozling upright and naïve Trojans, the legendary ancestors of the Romans, into dismantling their city walls and dragging the wooden horse, crammed with warriors, into Troy. The horse itself, of course, was a product of Greek treachery. The episode is introduced by the line: “Learn now of Greek treachery, and from the offense of one, get to know them all.” Sinon represents the nation. But things are a bit more complicated. This calumny of Greeks comes not from Virgil himself, but in a speech of his character Aeneas, broken-hearted and grieving over the fall of his city and his own flight.

In her treatment of Virgil, Beard once more stumbles into Cato trouble. She observes that the poet gave Catiline a “cameo role” in the Aeneid, when he portrays the villain “tortured in the underworld, trembling at the face[s] of the Furies,” the divine avengers of crime. The torture is psychological, like that of Tantalus; Catiline dangles forever at the edge of a cliff, waiting and waiting for the Furies to nudge him over the precipice. Virgil next introduces Cato as his virtuous counterpart. While Catiline trembles, Cato is vouchsafed the posh office of rule over the pii, the souls of the devout and righteous. But Beard does not mention it.

This is peculiar. Whatever other meanings and submeanings that gimlet-eyed critics have detected in it, the Aeneid is a celebration of Augustus, adopted son and heir of Caesar who in fact took on the name “Caesar” as soon as he arrived in Rome after the Ides of March. Julius Caesar despised Cato and wrote an Anticato, slinging mud at the paragon of virtue. The younger Caesar launched the career that would culminate in his becoming Augustus by avenging the murder of his father as an act of piety owed to an ancestor. How then to deal with the heroization of this uncompromising enemy of Caesar, and his association with the pii, in an epic so emphatically pro-Augustan? The explanation is likely to be that time heals wounds and also shifts political priorities.

By the mid-twenties BC, when Virgil was working on his epic, Augustus, intent on restoring the semblance of the old republic and trying indeed to foster an ideology of Catonian virtue, found memories of his father, slain for making himself dictator, less than useful. Augustus studiously practiced deference to a senate for which his father displayed open contempt. He lived modestly. He had his wife Livia act as a virtuous matron of a predecadent Rome by having her spend evenings spinning wool. In light of this, it should come as no surprise that a depoliticized Cato would be recruited in behalf of a restoration of traditional values.

Beard likes to tease staid traditionalists with such observations as that “to all intents and purposes . . . Virgil and Horace [were] on [the] payroll of Augustus.” First, their patron was Maecenas, not Augustus, though he was of course an indispensable adjutant of Augustus. Second, how, in the absence of the cultural institutions to which we are accustomed, were literary men to practice their craft without subsidies from the wealthy? Beard never considers the possibility that Virgil and Horace might have for good reasons welcomed the peace created by the new regime. John Stuart Mill knew better. In his Considerations on Representative Government, Mill observed,

“the establishment of the despotism of the Caesars was a great benefit to the entire generation in which it took place. It put a stop to civil war, abated a vast amount of malversation and tyranny by praetors and proconsuls; it fostered many of the graces of life, and intellectual cultivation in all departments not political; it produced monuments of literary genius . . .”

Beard continues her history through the first fourteen emperors, closing with Caracalla, who in 212 AD granted citizenship to all inhabitants of the empire. By this time, however, SPQR had long ceased to exist. It was replaced, as Tacitus mordantly observed, by senatus milesque et populus. The soldier now bestrode the stage, with senate and people as supernumeraries.

Gunther Heilbrunn is a retired classicist living in Pittsburgh, PA.