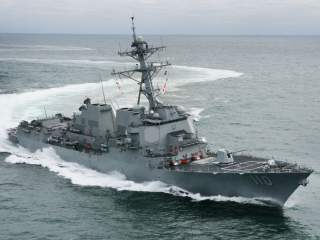 The world is steadily confronting the prospect of full-fledged Chinese domination in the world’s most important waterway, the South China Sea. America’s decades-long naval hegemony in Asia, as we know it, may soon vanish into thin air as a resurgent China reclaims primacy in the region. Though economically vulnerable, Beijing has lacked nothing in terms of geopolitical assertiveness. In a span of two months, China has dramatically redrawn the operational landscape in adjacent waters.

China kicked off the year with a bang, conducting several test flights to its newly built airstrips in the Spratly chain of islands. This was followed by China’s decision to (once again) deploy a giant oil rig, Haiyang Shiyou 981, into Vietnamese-claimed waters in the South China Sea, just as Hanoi deliberated on a high-stakes leadership transition. When President Barack Obama, during his “short-sleeve” summit with Southeast Asian leaders in Sunnylands, sought to mobilize regional diplomatic pressure on China, Beijing upped the ante by redeploying an HQ-9 surface-to-air missile (SAM) system to the disputed Paracel chain of islands.

Days later, China also dispatched fighter jets to its military facilities in the area. More worryingly, China has placed high-frequency radar facilities across four artificial islands, which could allow Beijing to, as reported by the Center for Strategic and International Studies, eventually “establish effective control over the sea and airspace throughout the South China Sea.” Chinese officials, however, have adamantly downplayed the strategic relevance of these developments.

Foreign Minister Wang Yi characterized them as "limited and necessary self-defense facilities," while the Chinese defense ministry dismissed all criticisms as Western media "hype." Foreign Ministry spokeswoman Hua Chunying took a step further, comparing China’s recent military maneuvers as perfectly routine and “not substantively different from the United States defending Hawaii." In fact, China tried to justify these military deployments as a response to America’s Freedom of Navigation Operations (FONOPs), with the latest one targeting China’s excessive sovereignty in the Paracel chain of islands. Yet China’s actions clearly contradict President Xi Jinping’s pledge, during his visit to Washington last year, to avoid militarizing the disputes.

Beyond the diplomatic obfuscations, however, the bottom line is clear. Having built a sprawling network of dual-purpose facilities, and dispatching advanced military platforms to artificial islands under its control, China is laying down the foundations of an Air Defense Identification Zone. Not only is China chipping away at American naval primacy in East Asia, thanks to its rapidly advancing anti-access/area-denial (A2/AD) capabilities, but it is transforming the South China Sea into a national lake.

The Obama administration has tried, with limited success so far, to rein in Chinese maritime ambitions by mobilizing a diplomatic and military coalition in the region. But America and its allies are running out of safe and easy options. And they will soon have to take more decisive countermeasures.

A crucial component of the Obama administration’s “constrainment” strategy against China is the mobilization of regional diplomatic support on the South China Sea issue. Historically a Chinese backyard, Southeast Asia has emerged in modern times as a theatre of fierce competition among great powers vying for dominance in Asia. The end of Cold War paved the way for what appeared as uncontested American hegemony in the region, but China’s rapid economic rise has allowed it to partially recreate a Sinocentric order in its backyard.

President Obama, who has visited Southeast Asia more than half a dozen times, vigorously engaged the Association of Southeast Asian Nations (ASEAN) well beyond any of his predecessors. Shortly after coming to power, the Obama administration appointed the first permanent mission by an outside power to the ASEAN Secretariat in Jakarta. It also signed the ASEAN Treaty of Amity and Cooperation, the foundational document of the regional body, while energetically supporting multilateral “constructive engagement” with a liberalizing Myanmar.

The Obama administration also launched the Lower Mekong Initiative in order to enhance American development footprint in Indochina, while inviting a rising Indonesia to join the elite G20 club. Sensing a strategic opening, it also established a blossoming security partnership with Vietnam, which has desperately sought to decouple from a domineering China.

Shortly before the much-touted Sunnylands summit with ASEAN leaders, Obama dispatched Secretary of State John Kerry to Indochina, where he met leaders of Laos and Cambodia, two countries that have been largely perceived as Chinese satellite states within Southeast Asia. The timing of Kerry’s visit couldn’t be any better, since Laos recently underwent a leadership reshuffle, which saw the emergence of a more independent-minded politburo. With Laos taking over ASEAN’s chairmanship this year, the Obama administration wanted to ensure that the Indochinese country will act responsibly—that is, not block any meaningful discussion of the South China Sea disputes.

China has consistently characterized the maritime spats as primarily bilateral issues to be discussed between claimant states alone, and has recently taken a hardline “don’t-even-mention-it” position in international fora. Offering economic incentives, Kerry sought to solicit support from and help Laos and Cambodia dampen their dependence on China. It was a relatively fruitful visit that set the stage for Obama’s high-profile summit with Southeast Asian leaders.

By hosting ASEAN leaders in the same place where Obama met his Chinese counterpart back in 2013, Washington sent a clear signal that his Pivot to Asia (P2A) strategy is a comprehensive engagement with the whole East Asian region, including smaller powers in Southeast Asia. There was also a great sense of strategic urgency, especially in light of China’s newfound economic dominance in East Asia as well as its increasingly aggressive posturing in disputed waters. The Obama administration tried to leverage the summit as a springboard to reclaim American leadership in Southeast Asia.

Eager to push back against China’s economic primacy in East Asia, which has been buttressed by the successful launch of the Asian Infrastructure Investment Bank (AIIB) and the pending implementation of the Maritime Silk Road Initiative, the Obama administration launched the U.S.-ASEAN Connect Initiative to reinforce America’s trade, investments and infrastructure footprint in Southeast Asia.

There was also an emphasis on booming U.S.-ASEAN bilateral trade, which topped $254 billion in 2014, having tripled in fewer than three decades. The Obama administration also used the summit as an opportunity to discuss the prospects of the expansion of the recently finalized Trans-Pacific Partnership (TPP) agreement to include the major ASEAN economies of Indonesia, Thailand and the Philippines in the next round of negotiations.

Crucially, President Obama encouraged ASEAN countries, especially the claimant states comprising Malaysia, Brunei, Vietnam and the Philippines, to adopt a more cohesive and unified approach vis-à-vis the South China Sea disputes. In the end, the Obama administration was able to get ASEAN’s support, including Laos, to issue a relatively robust joint statement, where the two sides underlined their “[s]hared commitment to peaceful resolution of disputes, including full respect for legal and diplomatic processes [emphasis mine], without resorting to the threat or use of force in accordance with universally recognized principles of international law and the 1982 United Nations Convention of the Law of the Sea (UNCLOS).”

The emphasis on “full respect for legal… processes” could be interpreted as an implicit endorsement of Manila’s decision to file an arbitration case against China at a tribunal under the aegis of Permanent Court of Arbitration at The Hague. Time and again, China has consistently opposed the arbitration case, dismissing it as nothing but “political provocation”. The two sides also expressed their “[s]hared commitment to maintain peace, security and stability in the region, ensuring maritime security and safety, including the rights of freedom of navigation and overflight and other lawful uses of the seas [emphasis mine],” in accordance to UNCLOS, while encouraging parties to observe “non-militarization and self-restraint” in the conduct of activities in disputed waters.

By emphasizing “the rights of freedom of navigation and overflight and other lawful uses of the seas,” America sought to communicate multilateral support for the U.S. Navy’s FONOPs, while communicating shared opposition to any plans by China to impose an Air Defense Identification Zone in the South China Sea. The emphasis on “non-militarization and self-restraint” could be interpreted as a criticism against claimant states’ decisions to deploy military platforms to disputed land features, as China has done in recent months.

During the recently concluded ASEAN Foreign Ministers Meeting in Laos, regional states once again reiterated the “importance of maintaining peace, security, stability and freedom of navigation in and over-flight above the South China Sea,” and expressed how they were “seriously concerned over the recent and ongoing developments [in the South China Sea] and took note of the concern expressed by some ministers on the land reclamations and escalation of activities [by China] in the area."

Beyond seeking ASEAN’s diplomatic support, the Obama administration has also called upon major powers in the region, particularly allies such as Australia and Japan, to step up to the plate. In its latest Defense White Paper, Canberra announced a major defense spending hike and expressed its growing concerns over the South China disputes. Despite China’s vehement opposition, Australia has also openly expressed support for the Philippines’ decision to take its maritime disputes with China to international court. There have been calls, including from Pentagon, for Australia to also conduct FONOPs in the South China Sea. So far, Australia has been involved in aerial patrols in disputed areas.