The End of Vietnam's Pivot to America? 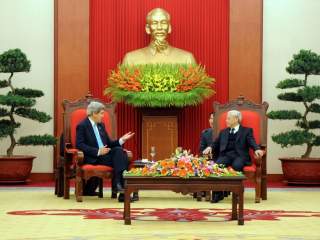 Between the fall of Saigon in 1975 and the restoration of formal diplomatic relations in 1995, there elapsed two decades of simmering resentment between the United States and Vietnam, rooted in the mutual depravity of war. But time heals all wounds—or at least that is how the old adage goes. Over the last two decades, Vietnam’s leadership, weighing the threat posed by China, has decided to play the long game of counterbalancing Beijing’s ascendancy by edging closer to Washington. From cosmetic niceties, such as the famous meeting between Robert McNamara and General Vo Nguyen Giap in 1997, to the high politics of joint naval exercises two years ago and the ratification of the Trans-Pacific Partnership (which includes the United States and Vietnam to the exclusion of China), the vector of Vietnamese geopolitics has been largely clear.

But domestic intrigue in Hanoi, which was only resolved between Prime Minister Nguyen Tan Dung and the Communist Party of Vietnam’s (CPV) General Secretary Nguyen Phu Trong earlier this year, might ultimately harm this modus vivendi. The game of musical chairs that broke out at the CPV’s Twelfth National Congress between the standard-bearers of two political camps, decidedly at odds with one another, threatens to leave the United States without a seat.

Prime Minister Dung has pursued economically liberal policies, reminiscent of those his near-namesake Deng Xiaoping implemented in China in the 1980s. Under his stewardship, Vietnam joined the WTO in 2006, foreign investment increased to a record level (alongside annual growth of 7 percent) and the nation’s somewhat war-torn infrastructure received a much-needed injection of stimulus funding in order to improve the attendant business climate. Even that universally known symbol of capitalistic incursion, the golden arches of McDonald’s, has found its way to Vietnam’s shores.

Dovetailing with Dung’s affinity for market reform is a pro-Americanism made all the more unlikely by his past life as a fourteen-year-old Viet Cong guerilla. Yet as recently as February 16, and in no less American a locale than Sunnylands, California, he called for “the United States [to] have a stronger voice and more practical and more efficient actions” in the South China Sea—a sentiment that does not diverge wildly from any of his previous statements on the issue.

In a comparatively different corner stands General Secretary Trong, whose feelings toward Dung’s reform agenda are best described as begrudging. Characterized by the scholar Alexander Vuving as “a mandarin at his core,” the General Secretary’s resume—studies in Marxist theory in Soviet-era Moscow, and head of the CPV’s Theoretical Council in charge of doctrine—bears out the assessment. At the same time, it also makes someone of Trong’s stripe far more wary of fast-paced change at the expense of communist orthodoxy. As one learned commentator explained, “Some blame him for a lack of reform, but as party chief his priority would be to maintain the party's rule. If reforms are too extensive or too rapid, they could destabilize the party.”

By extension, this same frame of mind also applies to how Trong views the rise of China. More likely to reserve his suspicion for a nation with an unapologetic capitalist bent like the United States than one still technically espousing the Marxist-Leninist line (although China’s communist bona fides are in serious doubt these days), Trong has repeatedly placed his thumb on Vietnam’s foreign-policy scales whenever he felt they weighed too much in America’s favor. Recently, this manifested itself in his organization of a military counterprotest on January 2 to refute the impression left by anti-China demonstrations over the past months.

Dung began maneuvering in the last couple of months to move up a rung on the ladder of leadership and oust Trong from the general secretaryship. Trong, for his part, had already determined to retain his post for the next two years, in order to be in the advantageous position of selecting a more permanent successor. The two leaders, it is worth mentioning, could well be described as men in a hurry; as both are over the age of sixty-five, the mandatory age of retirement from the CPV’s Central Committee (both received special dispensations from the party to contest the latest cycle), this showdown was set to be both men’s final display of political acrobatics.

Melodrama quickly turned into anticlimax when Dung, despite his appeals to Vietnamese nationalism, found that he did not have the support in either of the parallel state and party hierarchies to usurp Trong, duly dropping his clandestine bid. But Trong’s victory on January 27 goes far beyond having evicted his chief rival from the corridors of power. The 175-member Central Committee, charged with filling most powerful positions, saw fit to award the four key offices to which Vietnamese politicos can hope to ascend—general secretary, premier, president, and chairman of the National Assembly—to either Trong’s acolytes or Trong himself.

Thus, for the United States, the cause for concern is not so much that Dung did not ascend to the general secretaryship (though that would have been a boon for Washington), but rather the power vacuum in the premiership itself. In particular, his successor come May, Nguyen Xuan Phuc, is a man who has yet to take a firm stance on the Chimerica duopoly. Given that his position, unlike that of the general secretary, will involve more direct access to the organs of government rather than CPV direction-setting, where he eventually lands on the issue could spell either clear skies or turbulence ahead for the vaunted American “pivot” toward Asia.