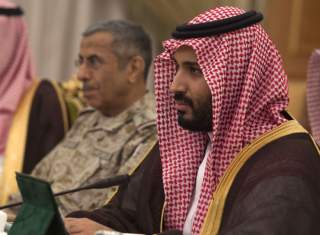 On June 7, Saudi Arabia laid out its National Transformation Plan to shift away from an oil-based economy. To do so, the plan’s architect, Deputy Crown Prince Mohammed bin Salman, intends to create the world’s largest sovereign wealth fund, to float an IPO of the world’s most valuable oil company and to cut welfare for some of the world’s most heavily subsidized people. Given all of the superlatives, it’s hard not to speculate about the plan’s ambition and viability. And many have. GE has already made an enormous bet, promising to invest at least $1.4 billion in the country.

But even if he can check off all the items on his wish list, the deputy crown prince may not guarantee a prosperous future for his kingdom. By cutting subsidies and ceding some control over its oil industry, Saudi Arabia might surrender an asset rivaling oil in value: political order in a region engulfed in conflict.

The primary cause of difficulty will be the belatedness of the post-oil push. Large economic transitions are most attainable when coffers are full and revenues are high. Saudi Arabia is setting out on a path for diversification under a chronic deficit and persistently low crude prices.

To realize a diversified economy, Saudi Arabia would need to create an unprecedented private sector with six million new jobs by 2030—more if women enter the workforce in larger numbers. The oil boom between 2003 and 2013 created only one-third as many. Saudi Arabia hopes to create 450,000 non-oil jobs before 2020. However, the country needs to create 226,000 jobs a year just to accommodate new entrants.

The prospect of a smooth transition has already passed by. In past years, the kingdom could have invested its massive foreign exchange reserves into the same schemes it now hopes to realize. Instead, Saudi Arabia is using that money to plug deficits nearing $100 billion a year.

The Saudi populace relies almost entirely on domestic diesel and associated natural gas for power. Demand is growing so fast it will shave two million barrels a day from exports by 2020 at current rates. Ironically, Saudi Arabia needs these exports to finance the post-oil future.

The country has long benefited from commanding international oil markets and deriving vast revenues from its oil wealth. Now that boon is a burden.

Without a glide path, Saudi Arabia must find the investment—$4 trillion, by McKinsey’s estimate—to push Saudi Arabia toward a new economic future. Doing so could destabilize the kingdom, the world’s biggest oil exporter and a U.S. ally.

The tough timetable has already prompted several unprecedented decisions, most notably the move to float an IPO of Saudi Aramco. Even if only 5 percent of the company were sold as per current plans, it would be the largest offering in history, estimated at $100 billion.

Deputy Crown Prince Mohammed bin Salman framed the IPO in “the interest of more transparency, and to counter corruption.” Certainly, going public with even part of the company would nudge the kingdom’s finances toward transparency. This may be the problem.

Saudi Arabia, far more so than many of the region’s monarchies and autocracies, maintains an expansive, intricate patronage network of royal family members. While impossible to calculate the exact sum of “family allowances” sustaining the network, it was estimated at $37 billion in 1996 with revenues from one million barrels of oil going entirely to “five or six princes.” This figure has likely grown since.

Family stipends offer political stability in a country without direct hereditary succession and where opposing factions within the family loom large. Going public with their stipends endangers the long-standing bargain of cash for compliance.

Extraordinary letters from senior princes reveal family members have called for regime change, expressing extreme distaste for the current oil policy and the deputy crown prince himself. Opening Saudi Aramco’s books could right the country’s burgeoning fiscal deficit, but it gambles with insurrection from within the ranks.

The risk from the country’s elite is matched with risk from the general populace. Saudi Arabia has already started removing subsidies and cutting public spending. Although many of these expenditures are economic inefficiencies, they also form the basis of a payment-based social contract.

These cuts portend unrest at best, and Arab Spring turmoil at worst.

Earlier this year, Saudi construction workers torched buses in Mecca because they had not received wages in months. One former White House foreign-policy advisor said, “The conditions that produced the Arab Spring five years ago haven’t gone away, and they seem to be even more of a concern in Saudi now.”

Saudi Arabia sidestepped the wave of unrest in 2011 owing to its generous oil-financed welfare system.

Naturally, the Saudi government is introducing reform gradually, to avoid such a situation. However, cuts will need to be deeper and quicker to put the country’s finances back in order. In January, Saudi Arabia more than doubled gasoline prices. That increase only brought gasoline to only twenty-four cents a liter or about ninety cents per gallon, only a tiny step toward the goal of prices in line with the international market.

Meanwhile, the Saudi adult population will more than double in the next fifteen years, offsetting cuts to the system of payments and subsidies.

Saudi Arabia intends to phase out subsidies not only for petroleum products, but also for water and electricity over the next five years. The plan includes the introduction of sales and income taxes and cuts to government wages, meaning lower salaries for more than two-thirds of Saudis.

The first price hike for gasoline had Saudis rushing to fill their tanks within hours. What comes next could be worse. There is a long, well-established history linking subsidy cuts to political instability. Neighboring Yemen and fellow oil producer Nigeria are recent examples of countries where price hikes incited violence.

The Saudi Arabia embarking on the National Transformation Plan will therefore be different political constraints than the Saudi Arabia of the oil boom. Those expecting economic change, like the deputy crown prince, should watch for political change as well.

Sagatom Saha is a research associate for energy and U.S. foreign policy at the Council on Foreign Relations.