The Environmental Left and Keystone XL 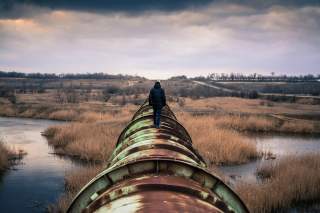 Everything old is new again, the latest manifestation of which is the reaction of the environmental Left to the news that President Donald Trump has issued presidential memoranda and an executive order resurrecting the Keystone XL and Dakota Access pipelines, and beginning the process of reversing the abject obstructionism of the Obama administration toward infrastructure investment for the production and transport of fossil fuels.

Only those with hearts of stone could fail to laugh at the anguish and hysteria attendant upon the Trump actions. They are “unwise and immoral.” “Keystone XL is a carbon bomb that would cook the planet.” “Donald Trump has been in office for four days, and he’s already proving to be the dangerous threat to our climate we feared he would be.”

• The pipeline would threaten jobs and communities with spills.

• The pipeline would increase dirty tar-sands oil production in Canada because shipping tar-sands oil by rail to the Gulf Coast has proven too expensive.

• The project would create only thirty-five permanent jobs and only 1,950 temporary jobs during a two-year construction period.

• The pipeline would threaten water resources, as it would pass within a mile of more than three thousand drinking-water and irrigation wells, and cross more than one thousand rivers, lakes and streams.

• Most of the Canadian tar-sands crude would be refined and shipped overseas rather than used in the United States.

With respect to climate change, Keystone XL would transport 830,000 barrels per day of Canadian crude oil, the total GHG emissions from which would be 147–159 million metric tons per year on a life-cycle basis. In the extreme case in which that oil does not displace any other crude oil production elsewhere in the world, the increase in GHG emissions would be about 0.4 percent of the world total. So: what would the resulting temperature effect be in the year 2100, using the National Center for Atmospheric Research climate model, under the highest IPCC assumption about the climate sensitivity of increasing greenhouse gas concentrations? Answer: about four ten-thousandths of a degree, a number rather inconsistent with apocalypse view of Keystone XL as a “carbon bomb that would cook the planet.”

Transport of oil by pipeline is substantially safer and lower-risk in terms of spills than transport by rail or truck, the real-world alternative to Keystone XL. An examination of the data shows that for crude oil and petroleum products in the United States, pipelines carry about 70 percent of the ton-miles; the respective figures for water transport, trucking and railroads are 23 percent, 4 percent and 3 percent. If we ignore water transport (not relevant as an alternative for Keystone XL), the data on incidents—explosions or fires, releases (spills) of five gallons or more, fatalities, personal injuries requiring hospitalization, or all-inclusive property damage exceeding $50,000—are summarized in Table 8 of Green and Furchtgott-Roth, “Intermodal Safety in the Transport of Oil.”

With respect to the argument that the pipeline would increase Canadian production: that this oil will be produced with or without the pipeline is a given, largely because fixed (or sunk) costs are uniquely high relative to production costs for oil-sands output. True enough, the Canadian oil competes with Mexican and Venezuelan crudes, so that higher transport costs for the most part reduce net prices received by the Canadian producers. But production costs (once the fixed costs are invested) for the existing Canadian oil-sands projects are about $30–40 per barrel. Accordingly, the cost of rail transport to the Gulf Coast is irrelevant: without Keystone XL, the oil will be produced, but refined in northern or eastern refineries, thus yielding an inefficient allocation of crude oil geographically, with lighter oil from hydraulic fracturing operations sent to the Gulf Coast refineries despite the fact that those facilities are optimized for heavier crudes. Without the pipeline, increased demand for rail transport will continue to create railroad capacity constraints, and thus increased incentives to expand that capacity over time. The upshot: the Canadian oil will be produced, and the only questions are where it will be refined and at what higher cost.

The employment to be created by the project remains to be seen—the various assertions on this parameter are not to be taken at face value—but in any event is not an issue with which government policy ought to be concerned, as the use of labor and other resources is a matter for market competition to decide. But the hypocrisy of the environmental Left on this issue is breathtaking, given the eternal “green jobs” argument used to justify heavy subsidies for wind and solar power projects. Merely consider the Ivanpah solar-power monstrosity in California’s Mojave Desert. Ivanpah employed about 2,600 construction workers and support staff over three years, and created about ninety permanent positions: numbers applauded by the leftists but not very different from those about which they sneer in the context of Keystone XL.

As for the purported threat to water resources: in 2014 there were about 1.8 million miles of oil and gas pipelines in the United States. The U.S. portion of Keystone XL would be 875 miles, thus adding five one-hundredths of a percent to the U.S. pipeline system. Again: pipeline transport is vastly safer than rail transport in every dimension. Does the Left really want to argue the comparative safety issue? Seriously?

The opponents of Keystone XL actually seem to believe that the prospective export of the petroleum products produced from Canadian oil somehow is a meaningful argument against the pipeline. Huh? The United States is part of a world market for crude oil and petroleum products, and the effects of changes in international prices or, say, of supply disruptions are independent of the direction and magnitude of such trade flows. “Energy security” is thus a rather empty concept, however much it is viewed as serious inside the Beltway. Do the opponents of the pipeline understand how to think about that issue? Well, no; but it is one more weak argument among many, and so why not just throw it in to see who salutes?

The 2016 election outcome suggests that the “median voters”—the voting bloc that determines election outcomes—now are lower-middle-class blue-collar workers. That is why leaders of the Democratic Party now are trying to find ways to regain support from these traditional Democratic voters. The basic problem in a nutshell: those voters are interested in expanded employment opportunity and higher wages, while the environmental Left is interested in its climate obsessions, renewable energy fantasies, opposition to fossil fuels, worship of Gaia and other such nostrums, utterly inconsistent with increased employment. Indeed, the contempt of the environmental Left for the blue-collar working class was illustrated sharply by the attitude of the Obama administration toward the economic suffering in coal country created in substantial part by its climate policies; the Environmental Protection Agency leadership and bureaucracy could not have cared less.

And so the reaction of some interest groups within the Democratic Party to the election outcome, vociferous and sometimes unhinged, suggests that the internal struggle that has begun is not so much about “women’s issues” or Keystone XL or the many other policy conflicts that any political coalition must resolve. Instead, it is clear that the screaming reflects the fear that efforts to re-attract blue-collar voters to the Democratic Party would violate, sharply, the policy preferences of the competing interests. That the arguments against Keystone XL are so blatant in their weakness reflects this larger political reality.