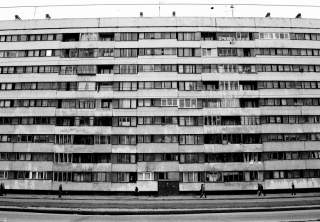 RUSSIA, IT IS often said, is a country that is barely able to stumble out of bed and put on matching socks in the morning. In the lead-up to the Winter Olympics in Sochi and continuing during the Games, the U.S. media declared open season on the nation. Americans were told that Russia is a country just about bereft of functioning elevators or toilets. Or even a national food, “except perhaps bad sushi.” Its people “hardly know who they are anymore” and its essence is defined by copyright infringement and “all-encompassing corruption.” All in all, Russia is “a country that’s falling apart,” as a New Republic cover story in February put it.

It’s a hardy theme. It’s also a completely bogus one. But that hasn’t stopped the media from reviving it again and again.

Thirteen years ago, for example, the Atlantic published a cover story, “Russia Is Finished,” on “the unstoppable descent of a once great power into social catastrophe” and ultimately “obscurity.” That was a particularly bad year to predict Russia’s demise, as an economic revival was starting to take hold. And these days, Russia is proving itself to be anything but “finished” as a geopolitical actor, with its aggressive seizure of Crimea and its arming of pro-Russia separatists in eastern Ukraine—who appear to be responsible for the July shooting down of a Malaysia Airlines passenger jet as it flew over rebel-held territory. Nor is Russia’s determined and so far successful backing of Bashar al-Assad in Syria, and its nascent alliance with China based on a historic energy pact, suggestive of a nation that is no longer a consequential player on the world stage. Russia remains a risk-taking nation—and as questionable, even reckless, as its gambles may be, as in its support for the rebels in eastern Ukraine, this is not the behavior of a country destined for insignificance. And while there is a great deal that is second-rate about Russia, from its sagging transportation infrastructure to its shoddy health-care system, such blemishes, common to many nations, including the United States, are hardly evidence of a fatal malaise.

The interesting question, then, is what lies behind this unbalanced mind-set—what might be called the “Russia Is Doomed” syndrome. What is the source of such stubbornly exaggerated thinking—and why is Russia chronically misdiagnosed in this fashion?

IT FEELS right, as a first line of exploration, to call in Dr. Freud. Maybe the strange idea that “the drama is coming to a close,” as the Atlantic piece prematurely declared of Russian history, is actually a wish of the collective Western subconscious—the silent urge of the id. The Freudian recesses can subtly affect our political desires, after all, and our twenty-first-century nervousness about Russia can be traced to long-standing European anxieties about despotic Russia as a kind of repository of the primitive in the human condition—dangerously and infuriatingly resistant to higher and hard-won European values. In his popular and bigoted early nineteenth-century travelogue, the French aristocrat Marquis de Custine said that in Russia “the veneer of European civilization was too thin to be credible.” His dyspeptic view of Russia has lived on ever since.

Russia was indeed less developed than Europe—according to standards of modernity such as science, technology and industry—but there was a self-serving element of power politics as well as cultural hauteur behind such disparagements. It is no surprise that the notion of Russia and Russians as representing an Other—as in, apart from “us Westerners”—was strikingly prevalent in nineteenth-century Victorian England. That was the time of the Great Game—the competition between Britain and Russia for influence and spoils in a swath of Asia stretching from the Indian subcontinent to the Black Sea.

The Crimean War of the 1850s, pitting both the French and the British against the Russians, sparked an especially intense British animus against a marauding Russian bear, pitted against the regal British lion, as the political cartoonists of the day had it. (Or a meek lion, as some illustrators sketched the scene. In one such cartoon, a massive bear, a Russian soldier’s cap on its head, sits atop a prostrate Persian cat, a lion looking on helplessly in the background.) Negative images of Russia seeped into British literature. George Stoker wrote an anti-Russian travelogue, With the Unspeakables, drawn from the Russo-Turkish war of 1877–1878. That book, in turn, may have supplied an impetus for his older brother, Bram, who later wrote of a pair of fantastical novels, Dracula and The Lady of the Shroud, that can be read as conjuring an “Eastern” or Slavic threat to England. In the end, of course, Count Dracula has his throat slashed and is stabbed dead in the heart.

Granted, the British Empire was a promiscuous slanderer of its motley rivals—consider the aspersions regularly cast toward the French. Still, British feelings toward Russia were notably raw. The historian J. H. Gleason, in his 1950 book The Genesis of Russophobia in Great Britain, characterized the nineteenth-century English public’s “antipathy toward Russia” as the “most pronounced and enduring element in the national outlook on the world abroad.” The sentiment, Gleason concluded, was concocted by a manipulative, imperial-minded elite—and was off base, anyway, since Britain’s foreign policy was actually “more provocative than Russia’s” in this period. Others concur. “The world champion imperialists of modern history, the British, were in a permanent state of hysteria about the chimera of Russia advancing over the Himalayas to India,” Martin Malia observed in his 1999 book Russia under Western Eyes.

Nevertheless, British pigeonholing of Russia endured even among the most sophisticated of observers. Thus John Maynard Keynes, after a trip to Bolshevik Russia in 1925, wondered whether the “mood of oppression” there might be “the fruit of some beastliness in the Russian nature.”

BRITISH ATTITUDES, inevitably, migrated across the Atlantic to America. Continental America, of course, was thousands of miles away from continental Russia, although Russian colonizers managed at one point to establish a settlement at Fort Ross in northern California in the early nineteenth century. The perceived threat, though, was less about territory and more about the foreignness and sheer unsavoriness of Russian ways. “No human beings, black, yellow or white, could be quite as untruthful, as insincere, as arrogant—in short, as untrustworthy in every way—as the Russians,” President Theodore Roosevelt wrote in 1905, as the Russo-Japanese war was drawing to a close. By contrast, the Japanese were “a wonderful and civilized people,” he said. (Roosevelt won the Nobel Peace Prize the following year for his efforts to negotiate an end to hostilities between the Russians and Japanese.)

America’s foremost Russia hand, George F. Kennan, it is true, had a very strong, even mystical, attraction to Russia. “There was some mysterious affinity which I could not explain even to myself,” he wrote in his memoirs. But Kennan stands out as an idiosyncratic exception amongst the American political class. That became evident during the Cold War, when blunderbuss denouncements of the Russians were a rote element of the national discourse—with the Russians always seen as the active agent behind the Soviet Union, even though its ruler, until his death in 1953, was a native Georgian, Joseph Stalin (born Dzhugashvili). Vilifications of the Russians came from across the political spectrum. Even J. Robert Oppenheimer—nuclear physicist, admirer of Igor Stravinsky’s Requiem Canticles, global traveler, student of the Bhagavad Gita in the original Sanskrit, director of the Institute for Advanced Study in Princeton—harbored the crudest of prejudices. “We are coping with a barbarous, backward people who are hardly loyal to their rulers,” he said in 1951, the echoes of Keynes and Marquis de Custine resounding in the distance.

Americans had plenty of encouragement in seeing themselves as the white hats in a Manichean struggle against the wild Russians. In his famous prophecy that America and Russia were destined to divide up the globe, set forth in the conclusion of the first volume of Democracy in America, published in the mid-1830s, Alexis de Tocqueville made clear where his sympathies lay. Glossing over the rough treatment of Native Americans by musket-bearing European settlers, he insisted that “the conquests of the American” are “gained by the ploughshare; those of the Russian by the sword.” What’s more, the “Anglo-American,” as Tocqueville described the incomers to America, “gives free scope to the unguided strength and common sense of the people; the Russian centers all the authority of society in a single arm.”

And yet Tocqueville’s assumption—that a democratic society like America would prove inherently less warlike than an autocratic society like Russia—while plausible on its face, represented as much as anything a hope that the future belonged to the democratic peoples of the world. Thus, Russia’s assigned role as a potential wrecker of this happy vision was made possible by John Locke, Thomas Jefferson and others with liberal ideas that had made only the tiniest of sprouts in the stinting Russian soil. Overlooked—Tocqueville’s gift of foresight was remarkable but not without limitations—was the fascist menace to come from within the very heart of Europe.

The dissolution of the Soviet Union in 1991—the expiration, if not of Russia itself, then at least of an enormous Moscow-directed utopian project, nearly three-quarters of a century long in the tooth—afforded a respite in such feelings about Russia. It’s always easier to be kind to the feeble: Russians were said to recover their humanity and decency precisely when their national power was at a historic ebb. As NATO expanded eastward, eventually to include the former Soviet Baltic republics on Russia’s border, there was even a weird idealization of the mostly compliant Boris Yeltsin as an avuncular, ruddy-cheeked, American-style democrat (with a touch of the ward boss about him). Not even Yeltsin’s war to subdue the breakaway province of Chechnya—which ended in at best a draw for him—ended the romance.