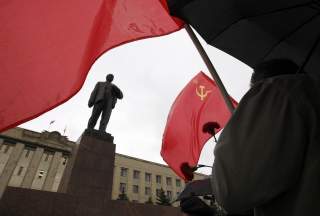 History is a long series of what-ifs. What if Gavrilo Princip had missed when he shot at the royal couple? What if European statesmen had been more determined to prevent war? What if the czar had followed his instincts and kept Russia out of the war? What if the Provisional Government had negotiated peace with Germany? What if Lenin had been left exiled in Zurich?

Communism almost certainly would not have taken over Russia, transforming the twentieth century for the great ill of mankind. But, unfortunately, we must confront the consequences of actual history, rather than what-ifs—including the birth of the Soviet state a century ago.

Image: Communist supporters lay flowers at the statue of Lenin to mark the anniversary of the 1917 Bolshevik revolution in the south Russian city of Stavropol November 7, 2012. REUTERS/Eduard Korniyenko​