The EU Will Likely Implode 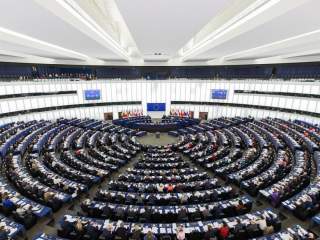 The European Union faces so many different crises that it has been—until now—impossible to predict the precise catalyst for its likely demise. The obvious candidates for destroying the EU include the looming refugee crisis, the tottering banking structure that is resistant to both bail-outs and bail-ins, the public distrust of the political establishment, and the nearly immobilized EU institutions.

But the most immediate crisis that could spell the EU’s doom is Prime Minister David Cameron’s failure to wrest from Brussels concessions that he needs in order to placate the increasingly euroskeptic British public. Prime Minister Cameron has failed because the EU cannot grant the necessary concessions. There are three special reasons, as well as one underlying reality, that have made Cameron’s task impossible.

First, a profound reform of the EU-British relationship, which Cameron initially promised, was always impossible, because it required a “treaty change” in each of the twenty-eight EU member-states, and that could not happen without approval by either parliamentary votes or, and this is especially difficult, national referenda that Brussels dreads. There is simply no appetite in Europe to run such risks in order to appease the UK.

Second, Cameron was willing to settle for a compromise, but failed to obtain most of what he needed, because Brussels fears that other member states will follow the British example and demand similar accommodations. That would result in a “smorgasbord EU” in which each country could pick and choose what serves its own best interests. In other words, it would make a mockery of “an ever closer Europe.”

And so, Cameron ended up with what one Conservative Member of Parliament, Jacob Rees-Mogg, called a "thin gruel [of a reform] has been further watered down."

To make matters worse, Cameron’s “thin gruel” will require a vote by the EU Parliament after the British referendum takes place. As a sovereign body, the EU Parliament will be able to make changes to any deal approved by the British public—an uncomfortable and inescapable fact that the advocates of Brexit will surely utilize to their advantage during the referendum campaign.

At the root of the conundrum faced by the British and European negotiators is a struggle between a national political system anchored in parliamentary supremacy, and a supra-national technocracy in Brussels that requires pooling of national sovereignty in order to achieve a European federal union. The public debate over the referendum is driving this fundamental incompatibility home. The choice between one and the other can no longer be deferred.

The most common image of a failing Europe is that of something falling apart, unraveling, crumbling away or even evaporating into thin air. This imagery is misleading. Following the British referendum, and perhaps even before it, the EU will most likely implode.

Once the odds of Britain’s exit from the EU increase from merely likely to near-certain, the rush for the exits will begin in earnest. It is impossible to predict which of the member-state will lead the charge, but the floodgates are sure to open. Those pro-EU governments that still remain in office are under siege in almost every member-state. As in Britain, the establishment parties will have to appease increasingly hostile electorates by getting a “better deal” from the EU. Or they could face electoral oblivion.

From the protectionist National Front in France, through the leftist Podemos, to the anti-immigrant Sweden Democrats, the once-fringe anti-EU political parties are edging ever-closer to power.

Renegotiations will obviously differ from country to country. Those member-states that have received bailouts will ask for debt relief, while in other states internal security may be the dominant concern. All, no doubt, will demand repatriation of powers from Brussels.

The EU itself will cease to count as an institution of global importance. Like the League of Nations, some of the EU institutions will go on—surviving in a state of increasing atrophy.

Paradoxically, the euro, which is a source of many of the EU’s problems, will likely survive—in some fashion. At a minimum, the Frankfurt bureaucracy will continue as a settlement house for redistributing the debt burden.

The euro might survive alongside the reestablished national monies as a parallel currency. It might even be used exclusively by states wanting to remain on a de facto DM standard or those states still committed to the idea of an “ever closer union.”

What transpires in the aftermath of the EU’s collapse will be critical. No one can script a precise scenario for what might happen. A few facts nonetheless must be borne in mind in assessing possible outcomes.

First, international responsibilities appropriated for itself by the EU can be taken over by other international organizations like the WTO. This is particularly important when it comes to giant trade agreements that are now under negotiation.

Second, a post-EU settlement may require large-scale diplomatic initiatives, like the one in San Francisco that founded the United Nations, or Bretton Woods that created the framework for the post-World War II international monetary system. Such momentous gatherings can, if properly conducted, act decisively.

Increasing the likelihood of a successful shift into a post-EU world system is of immense importance. The increase in trade-driven global interdependence will continue with or without the EU. Every nation has a huge and growing stake in a favorable outcome.

No doubt the superpowers will have a powerful voice in any likely future settlement. Such a thing will nevertheless require strong leadership from London, the seat of the European financial system as well as Berlin, the economic capital of Europe. There is no compelling reason to conclude, finally, that the eclipse of the EU entails the decline of Europe. The contrary may well prove to be the case.

John Gillingham is visiting fellow at the Harvard University’s Center for European Studies.

Marian Tupy is a senior policy analyst at the Cato Institute.