The European Union Has a Currency Problem 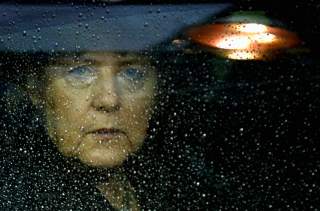 Donald Trump, for all his rhetorical clumsiness and intellectual limitations, still sometimes makes a valid point. He does when he says that Germany is “very bad on trade.” However much Berlin claims innocence and good intentions, the fact remains that the euro heavily stacks the deck in favor of German exporters and against others, in Europe and further afield. It is surely no coincidence that the country’s trade has gone from about balance when the euro was created to a huge surplus amounting at last measure to over 8 percent of the economy—while at the same time every other major EU economy has fallen into deficit. Nor could an honest observer deny that the bias distorts economic structures in Europe and beyond, perhaps most especially in Germany, a point Berlin also seems to have missed.

The euro was supposed to help all who joined it. When it was introduced at the very end of the last century, the EU provided the world with white papers and policy briefings itemizing the common currency’s universal benefits. Politically, Europe, as a single entity with a single currency, could, they argued, at last stand as a peer to other powerful economies, such as the United States, Japan and China. The euro would also share the benefits of seigniorage more equally throughout the union. Because business holds currency, issuing nations get the benefit of acquiring real goods and services in return for the paper that the sellers hold. But since business prefers to hold the currencies of larger, stronger economies, it is these countries that tend to get the greatest benefit. The euro, its creators argued, would give seigniorage advantages to the union as a whole and not just its strongest members.

All, the EU argued further, would benefit from the increase in trade that would develop as people worried less over currency fluctuations. With little risk of a currency loss, interest rates would fall, giving especially smaller, weaker members the advantage of cheaper credit and encouraging more investment and economic development than would otherwise occur. Greater trade would also deepen economic integration, allow residents of the union to choose from a greater diversity of goods and services, and offer the more unified European economy greater resilience in the face of economic cycles, whether they had their origins internally or from abroad.

It was a pretty picture, but it did not quite work as planned. Instead of giving all greater general advantages, the common currency, it is now clear, locked in distorting and inequitable currency mispricings. These began with the enthusiasm in the run up to the currency union. High hopes for countries such as Greece, Spain, Portugal, and to a lesser extent Italy, had bid up the prices of their individual national currencies. In time, reality would have adjusted such overpricing back to levels better suited to each economy’s fundamental strengths and weaknesses. But the euro froze them in place, making permanent what otherwise would have been a temporary pressure. At the same time, Germany, which at the time was still suffering from the economic difficulties of its reunification, joined the common currency with a weak deutsche mark, locking in a rate, International Monetary Fund (IMF) data suggests, some 6 percent below levels consistent with German economic fundamentals.

Right from the start, then, the currency union divided the Eurozone into two classes of economies. Greece, Spain Portugal, Italy, and others became the consumers. Because the euro had locked in their overpriced currencies, populations in these countries had the sense that they had more global purchasing power than their economic fundamentals could support and consumed accordingly. At the same time, the currency overpricing put producers in these countries at a competitive disadvantage. Germany, having locked in a cheap currency position, faced the opposite mix. It became the producer for all Europe even as its own consumers, feeling a little poorer than they otherwise might have, remained cautious. Because Germans in this situation had every incentive to sustain production, while others did not, they made more productive investments, improving their economic fundamentals and so widening the gap between economic reality and the euro’s expression of it. Updated IMF data suggests that by 2016 Germany’s relative pricing edge had doubled to 12 percent.

These pricing biases have gone on to foster still more harm. The German economy has become increasingly export oriented, less responsive to its own consumers, more vulnerable to what happens abroad, and consequently more fragile. The distortions have also spilled outside Europe. By exacerbating the fiscal-financial problems of so many Eurozone members, they contributed to a general decline of the euro against the dollar, the yen, the yuan and other currencies. Accordingly, German industry’s pricing advantage has extended to the global marketplace, certainly compared to where matters would have stood if Germany had an independent currency that avoided the taint of Europe’s troubled economies. Japanese producers complain incessantly about how the strong yen has priced their products off global markets. American producers, which have seen the euro fall some 30 percent against the dollar during the past ten years, are hardly any better off. German industry makes no such complaints.

Berlin and the German media have pushed away any blame. They hotly deny that the country engineered matters in this way. This may be so. No one at the euro’s birth anticipated such a result, not even the Germans. But whether the advantage was planned or not, Berlin, it is clear, has certainly taken advantage of it and has taken steps to perpetuate it. Germany has, for instance, put some 671 billion euros ($752 billion) at risk, one quarter of its gross domestic product (GDP), to support Greece and other troubled nations on Europe’s periphery. It has also helped lasso the IMF into such lending. Berlin claims that all this money at risk reflects its commitment to the European experiment in union. That may indeed be so, but it is an awful lot of altruism. A more cynically inclined observer might suggest such extreme actions have an alternative motivation, that the Germans are desperate to prevent the unraveling of a structure that serves German industry well.

Whatever the truth of German motivations, Trump, it should be clear now, has a point. Germany is leveraging an unfair and distorting competitive advantage. More important everyone, except of course German industrialists, has an interest in unwinding this currency pricing bias. It is not apparent how Europe could do this. A harmonization of tax and spending policies might reduce some of the hardship imposed by these pricing biases but not remove the basic problem. A good first step might at least admit that such distortions exist and that an adjustment would provide relief. For non-German consumers, it might encourage restraint by demonstrating that the global purchasing power of their incomes is less than they had supposed. For German households, it would have the opposite effect. Finding a way to correct the imbalance would provide a lift to non-German production and in so doing lift the pressure of the fiscal-financial crisis under which Europe has labored now for almost ten years. In the process, it would save the German taxpayer from having to put so much money at risk to prop up a distorting system. If an adjustment would hurt German industry, it would also slow or perhaps reverse the underlying ill effects it is having on the structure of that important economy.