The EU's Day of Reckoning: Italy Is Too Big to Bail Out 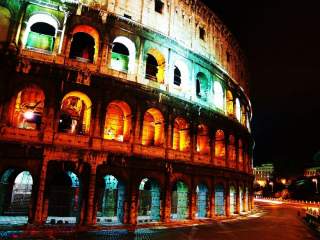 Italy is one of the world’s leading tourist destinations. The ruins of the Roman Empire, in particular, the Coliseum, Palatine Hill, the Pantheon and the Forum, are major attractions. New ruins are now being created to mark the political decay at work at the heart of Italy’s democracy and economic policymaking. These new ruins could well include the country’s central bank and parliament as well as the Eurozone as the stage is set for Europe’s next big economic debt crisis.

At the center of the brewing storm is the issue of confidence. When investors trust sovereign debtors, governments have access to credit markets. When investors lose confidence in a country’s ability to pay, they head for the door. The cost of borrowing goes up and at some point it hits a level where it becomes unaffordable to raise money.

Such a loss of confidence afflicted Cyprus, Ireland, Greece and Portugal between 2010 and 2012, shutting them out of public borrowing, creating the European debt crisis and forcing them to seek financial assistance from the European Union, European Central Bank and International Monetary Fund. Italy barely avoided that embarrassment.

Italy’s escape from an embarrassing bailout came via the intervention of the European Central Bank led by Mario Draghi. The dapper Italian head of the ECB in 2012 vowed to do “whatever it would take” to save the euro and hold the Eurozone together. That promise helped calm debt and equity markets, reopen access to capital markets and firm up European sovereign debt prices.

The ECB’s words were combined with country specific reform programs, which sought and are still seeking to liberalize sclerotic labor markets, streamline bloated public sectors, improve tax collection and launch privatizations. In the end, these structural reforms are intended to improve government finances and cut public sector debt while stimulating economic growth and badly needed private sector jobs. All of this would reaffirm investor confidence in Italian, or for that matter, Greek, Irish and Portuguese debt.

At least that was the way things were supposed to happen. The problem is that reforms in a number of countries were not vigorously pursued, because the ECB’s policies allowed political elites, like Italy’s, to avoid unpalatable measures. But the power of Draghi’s public declarations, which calmed European debt markets during 2012-2014, is diminishing. Unsurprisingly, 2015 increasingly has the look of a year of reckoning for Italy.

Conditions are aligning that could push Italy into a severe new economic crisis. To its credit, the government has managed to keep its fiscal deficit to around 3 percent of GDP over the past several years and Prime Minister Matteo Renzi is attempting to push a labor reform bill through parliament. The problem is that this is probably too little to late to help matters.

The economy is in its third recession in six years, unemployment is 13.2 percent and youth unemployment is at 43 percent (according to national statistics office Istat). Growth prospects are not robust – a meager return of 0.2 percent real GDP expansion is set for 2015. Furthermore, Italy’s demographics are dismal. Designated by Moody’s Investor Service as one of the “super-gray” countries, the number of aging Italians dependent on a shrinking workforce is growing. This provides a considerable structural headwind to the economy.

Related to bad demographics is Italy’s 2,700 page labor code, which makes it almost impossible for companies to fire workers.  Italian companies find themselves in an uncompetitive position as they cannot move rapidly to downsize businesses or adopt new strategies. It has also divided the work force into the older entrenched and often unionized working class and a younger work force that is forced to look to temporary jobs as one of the few outlets for employment. Many young and talented opt to leave. In its in its 2014-2015’s assessment of global competitiveness, the World Economic Forum ranked Italy 45th out of 144th, but its labor market rigidness was 136th, government efficiency at 143rd, and inability to make efficient use of its talent at 130th.

All of this is reflected by the recent discussion over Ferrari’s consideration of moving its fiscal residence outside of Italy to save on corporate taxes. Carla Ruocco, a lawmaker for the opposition Five Star Movement observed: “Corporate taxes remain too high, investment plans to modernize the country are nowhere to be seen, while resources are getting destroyed by corruption. Given this business environment, it’s not surprising that more and more companies and investors are fleeing the country.”

All of this poinlyts back to Ita’s public sector debt, the second largest in terms of advanced economies’ debt to GDP after Japan. According to Standard & Poor’s (S&P), Italy’s general government debt will not peak until 2016, when it climbs at above 133 percent of GDP. S&P also noted that it expects the general government debt to amount to €2.3 trillion ($2.8 trillion) by the end of 2017. This means that the Italian government needs to refinance a huge amount of debt over the next several years. According to Bloomberg, Italy needs to go to markets to finance €333billion next year, €182 billion in 2016 and close to €200 billion in 2017.

What is worse, much of that government debt is held by Italian banks. With an economy in the doldrums for years, Italian banks have increasingly bought government bonds. Italy’s central bank reported that as of October 2014 Italian banks increased their holdings of the country’s sovereign debt to a record high of €414 billion. Consequently, any crisis in government debt will quickly funnel into its banking system.

While these factors have been evident for the last couple of years, the horizon is darkening with a combination of a new bout of political instability and vulnerability to an external shock.  On the political front, Prime Minister Renzi is young (39), energetic and charismatic. He insists that his government coalition will remain in office to the end of the parliamentary term in early 2018.

This might be wishful thinking. The Economist Intelligence Unit noted on December 4: “Two important sources of stability will be removed in 2015 and beyond: Italy’s six-month presidency of the EU, which concludes at the end of 2014; and the widely respected president Giorgio Napolitano, who is expected to retire shortly after Italy’s EU presidency ends.”

The European Union presidency kept pressure on Italy to change and lead by example. Once Italy steps away from that role, some of the external pressure to adhere to reform diminishes. Napolitano’s departure also hurts, as he was able to rise above politics and function as a respected intermediary. As the EU and Napolitano pillars of support are removed, the situation becomes more challenging.

Renzi’s own coalition is fractious, entrenched interests are fighting reform, and much of the public opposes austerity and change. Even some degree of tacit support from the right cannot be taken for granted, considering an intensified jockeying for power among its parties. Rounding out the picture is the anti-establishment Five Star Movement, which won 25 percent of the vote in 2013, but has been hit by infighting and defections of its parliamentary members. All of this puts Italy in play for elections – sometime in the second half of 2015. If nothing else, elections will inject a high degree of uncertainty into markets and erode confidence.

Another factor to challenge Italy’s political stability and its ability to repay its mountain of debt is Greece. Greek politics currently rotate around the vote for the next president and parliament. If the Samaras government exits and is replaced by the leftist anti-austerity Syriza Party, the value of European sovereign debt is likely to be questioned. Syriza has already indicated that if elected it would reject austerity measures and seek some type of debt forgiveness. This raises similar questions about Italy, which in terms of debt dynamics is Greece on steroids.

One last factor to consider is the ECB’s role. The central bank has pursued accommodative policies – more through suggestion and verbiage than quantitative easing practiced until recently by the U.S. central bank. In this sense, the ECB’s approach has continued to allow European sovereigns to borrow at cheap rates. Indeed, Italy’s sovereign debt measured by yields is more expensive than that of the United States. It can also be argued that the ECB’s accommodative policies have allowed the Italian political elite to go slow on economic reforms.

But ECB policy is heavily influenced by Germany, which has been opposed to quantitative easing and its representatives are said to be increasingly opposed to Draghi. Germany is resistant to ECB money-printing (monetary stimulus) and emphasizes that what is needed is more austerity. A Draghi departure would negatively impact market confidence in Italian sovereign debt. It could spark a major crisis, considering the confidence built up around him – rightfully or wrongfully.

An Italian sovereign debt crisis is the ultimate European nightmare scenario. Simply stated, Italy is too big to bail out. It would be difficult to ignore a default of part or all of the €2.3 trillion in Italian public sector debt. Italy is not Portugal or Greece; it is the Eurozone’s third largest economy. A major sovereign debt crisis potentially threatens the euro, the cohesiveness of the EU and global financial markets. It does not have to be this way. Italy’s political class has to move beyond its narrow short-term self-interests and think longer term or risk falling into a long-term economic suicide spiral. The rest of Europe, already threatened by Japan-style deflation, needs to push harder on reforms and the Germans must help maintain an accommodative ECB policy. The European experiment is speeding into 2015, with Italy at the wheel. Thus far seatbelts do not appear in evidence and no one knows if the brakes are still working.