The Evolution of the North Korea Crisis through China's Eyes 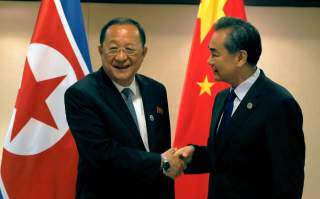 News of border talks between North Korea and South Korea can only be positive given the dangerous depths that this crisis had plumbed in recent months. That the New York Times greeted the peace overture in a front page editorial of their January 2 edition with deep suspicion as a ploy to break the U.S.-South Korean alliance only suggests how far afield that newspaper has drifted into the hawkish camp on nearly all national security questions. The U.S.-South Korean alliance remains strong and will hardly be jeopardized by border talks. What could break the alliance, however, is the perception growing in South Korea that Americans are willing to flirt with the possibility of initiating (nuclear) war. Such a perception can be dispelled if Americans and their leading newspapers fully embrace negotiations—a stance quite appropriate to the nuclear age—and one wholly consistent with President John F. Kennedy’s famous dictum that we should “never fear to negotiate.”

A substantial segment of the ongoing debate about the Korea crisis in the United States has revolved around China’s role, and this Dragon Eye column has endeavored over the past few years to share a variety of insights from Chinese analysts on the most crucial questions related to the crisis. The tenor of the overall debate in the United States on the question of China’s role has taken a more urgent and dangerous turn of late. Impatience has given way to disappointment, which is quickly now yielding to anger and accusations, with new threats to punish Beijing now not far behind. However, the mistake in hoping that China would take responsibility for the North Korea nuclear issue was not in overestimating China’s importance, but rather in believing that this importance somehow absolved the United States of any responsibility to take active steps toward reconciliation. To the contrary, resolution of the North Korean nuclear issue can only come about as a result of a creative and dynamic interaction that involves the the United States, China and both Koreas in a step-by-step de-escalation model that makes full use of carrots as well as sticks to defuse the confrontation.

Although other players, notably South Korea and possibly also Russia, may now take the lead in trying to broker a peace settlement, China’s role remains prominent and this column will examine a few additional points on that critical relationship. Many in both the West and in China have read the visit of Song Tao, President Xi Jinping’s special emissary to Pyongyang back in mid-November, as an utter failure, since he was refused an audience with Kim Jung-un. Chinese reporting from Global Times [环球时报] on November 19 does indeed suggest that Beijing had hoped for such a meeting. During my own visit to Beijing in early December, moreover, I encountered significant disappointment (and even shock) among Chinese specialists that this meeting did not occur.

A November 18 Global Times editorial, however, had made clear that foreign expectations for the Song visit were way too high. This editorial argues that foreign assessments “of China-North Korean relations are not necessarily objective or accurate.” [对中朝关系的认识未必都客观, 准确] Thus, it is explained, they routinely “overestimate China’s capability to influence North Korea.” Moreover, it is explained that a “miracle”[奇迹] diplomatic breakthrough of the type hoped for could only be expected when “the melon is ripe so it falls from the stem.” [瓜熟低落]. The piece suggests with evident concern that the United States has made the job that much harder by greeting North Korea’s two months of “all quiet” [沉寂] on the testing front by placing North Korea back on the list of states supporting terrorism. On the other hand, the same editorial points out that Washington has shown some flexibility, and the counterfactual is even posited about how the situation might be different today if America had articulated its “4 no’s” [四不] some years earlier, but for now the outlook perceived by the Chinese is for “ever greater pressure.” [加更大的压力] As for the Song visit to Pyongyang, the article states that the visit was an important step, but that one could hardly expect “the stalemate to be broken by a single visit.”

Indeed, a closer reading of Chinese reporting may suggest that the Song Tao visit was not a complete failure. The fact that the visit lasted for four days, and that Song met with both the Secretary of the Korean Workers’ Party, as well as a former foreign minister, does imply substantive dialogue. Perhaps it is also of significance that Song visited North Korea’s largest cemetery of China’s People Volunteers from the Korean War. Surely, this was intended as a sign from both Beijing and Pyongyang that their security ties have not dissipated entirely. Perhaps a November 20 editorial in Global Times was accurate in asserting that, “The relationship between Beijing and Pyongyang is not as good as some optimists think. It is also not as bad as some pessimists believe.”

True, that observation did precede the latest round of sanctions (Dec 22), which in turn followed North Korea’s latest ICBM test (Nov 29). A relatively comprehensive Chinese language survey of the sanctions issue by Shanghai researcher Hao Qunhuan [郝群欢] appeared in the October 2017 issue of the journal International Politics [国际政治]. Raising a number of questions with the sanctions approach, Hao writes that “The North Korean economy has on its own capability for resistance and also for rejuvenation.” [朝鲜经济自身具有抗打击能力与修复能力] He cites North Korea’s evident focus on technical education, “an obviously improved … electricity situation,” and a renewed focus on “people’s livelihoods.” [民生经济] Hao also says that sanctions reinforce unity within North Korea’s internal politics. He makes the fascinating observation that Pyongyang is now seeking “to cause more North Koreans to believe that China’s participation in the UNSC sanctions amounts to abandoning China-North Korean friendship, and is a major reason for the deterioration of the North Korean economy.” [要使更多的朝鲜人认为中国参与联合国安理会制裁是对中朝友谊的抛弃,也是朝鲜经济恶化的重要原因] Not surprisingly, he reiterates China’s long-time stance that Beijing is unwilling to exercise sanctions pressure to the point that such measures endanger North Korean regime stability or threaten people’s livelihoods. He does warn: “… sanctions can also cause an aggravation and acceleration of the spiral-type vicious cycle of nuclear and missile testing” on the Korean Peninsula. [制裁又使其变本加厉地推进核导试验的螺旋式恶性循环].

Sanctions may be a useful instrument to pressure Pyongyang to come to the table and make a favorable deal. It is quite plausible that the latest round of sanctions might have caused Kim Jung-un to reevaluate and precipitated the more reasonable position in the New Year, including the potential thaw surrounding the Olympics. Nevertheless, Chinese and American diplomats need to think (together) about carrots as well as sticks. They may follow the advice of Hao Qunhuan discussed above and had better also consider the caution of long-time Korea watcher Andrei Lankov. He warns that the new, much tougher sanctions could indeed prompt revolutionary upheaval in North Korea: “If the top leaders start losing the internal war and see themselves as doomed, they may decide to go out with a bang, not whimper – perhaps by using their nuclear weapons to attack neighboring countries and even the United States.” He even posits that “China … will not be out of harm’s way, either …”

China’s diplomacy has thus far not succeeded in making a breakthrough in the present nuclear crisis. Beijing has made constructive proposals, such as a “double freeze” that should be carefully evaluated in Washington and allied capitals. Whatever the outlines of an eventual agreement, China will be able to contribute much to its successful negotiations and implementation. China can offer generous economic assistance and security assurances (up to and including conventional weaponry), as well as crucial experience and technical capabilities with respect to arms control and verification (of proliferation safeguards, for example). While many Chinese strategists may be resigned to “riding the waves” and thus attempting to minimize the impact of the Korean issue on China. Nevertheless, the global community needs Beijing’s skilled diplomats to once again intensify their efforts to resolve this crisis in the very heart of East Asia.

U.S. policy should also be cautious and constructive. Keeping in mind, of course, that tweets are wholly inappropriate to a full-blown nuclear crisis, rash criticism of any inclination to negotiate is exactly the opposite of what is needed at this delicate moment. A former assistant secretary of state for East Asian and Pacific Affairs was quoted in the New York Times on January 4 as suggesting in response to the possibility of inter-Korean border talks that, “if the South Koreans are viewed as running off the leash, it will exacerbate tensions within the alliance.” Such a condescending and demeaning metaphor comparing South Korea to a dog held by a tether embodies much of what is wrong with the “Blob” in Washington and their conception of the Korean problem specifically, as well as U.S. strategy more broadly. A more humble approach is now required: one that puts a premium on listening and talking, rather than grandstanding.