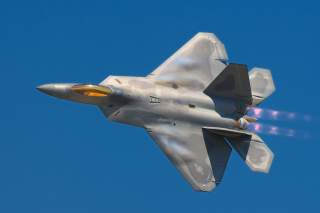 Typically, the Blue F-22s will slaughter the enemy from long-range. Indeed, as Fesler notes, if an enemy aircraft has survived to enter the “merge”—or visual range combat—and finds a Raptor, something has gone terribly wrong. That usually leads to an intensive debrief to understand what went wrong. Indeed, all of the pilots I spoke to unanimously told me that the debrief is the most important part of a training sortie. Nonetheless, F-22 pilots train extensively for a visual range fight. “We usually train full-up versus full-up,” Crash said. “We assume that a Western-trained F-22 is going to be the most challenging threat we’re going to go against.”

A Big Upgrade (And Something Needed):

One recent addition to the Raptors at Langley is the new Block 3.2A/Update 5 software. At long last, the new upgrade adds the Raytheon AIM-9X Sidewinder high-off boresight missile—something long coveted by the F-22 community. The additional of the AIM-9X is a huge improvement for the Raptor, all of the pilots at 1st Fighter Wing that I spoke to told me. The addition of the new weapon greatly increases the F-22’s already formidable lethality. That’s even though Upgrade 5 is an interim capability. The AIM-9X and the Raytheon AIM-120D AMRAAM missiles will be fully integrated onto the Raptor with the Increment 3.2B upgrade—which has yet to be fielded.

The one thing that the F-22 is still lacking is a helmet-mounted cuing system (HMCS) that would be used to exploit the outer edges of the AIM-9X’s capabilities. It’s a feature that is common on most U.S. fighter aircraft—and most foreign ones. The lack of such a system would normally place the Raptor at a severe disadvantage in a dogfight—if the aircraft didn’t perform as well as it does.

The Air Force is still planning on adding such a helmet-mounted cuing system to the F-22, but pilots at the 1st Fighter Wing say that it is not an absolute necessity. The Raptor can usually dominate a fight even without such a system. Indeed, as Fesler noted—even without the AIM-9X or a HMCS—F-22 pilots often close into gun range and ambush other jets in visual range. “I can sneak up on a guy,” Fesler said. “In the F-22, I convert on guys, and they never even see you there. You roll up right behind them and go ‘why waste a missile when you have a gun.’”

Ultimately, as the U.S. Air Force’s only dedicated fifth-generation air superiority fighter in an increasingly hostile world where the threat grows more challenging every day, it is in the service’s best interest to ensure the Raptor remains as capable as possible. Right now, the Air Force is slated to equip the F-22 with a helmet mounted sight by 2020, but similar efforts have fallen prey to budget cut in the past.

“The helmet would be awesome to have, but it’s not a game changer for us.” Crash said. “But a helmet-mounted sight would help us a lot.”