The Fabric of Arab Society Is in Tatters 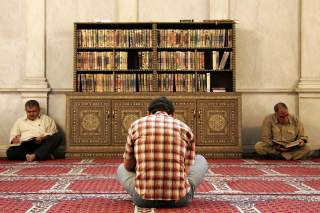 Earlier this month, religious scholars gathered in Cairo at an unusual meeting to call for equality among religious minorities within Islamic societies—not just in matters of religion but in civil affairs as well. Although on the face of it, such notions seem Pollyannaish, given the raging wars in Syria, Iraq and Yemen, the lack of rights for all gets to the core of the turmoil in the Middle East.

If all Iraqis, for example, had equal rights, would they be inclined to support ISIS? If Syrians—Alawites, Sunnis, Christians—believed they were equal partners in the civil state, would the war have reached such heights, with four hundred thousand killed to date? Probably not.

It is easy to forget that when the Arab uprisings began in 2011 the universal goal was to establish social justice in countries ruled by dictators—in power for decades with much help from the West. This objective was shared by different religions and Islamic sects. Although in countries like Egypt, Syria, Libya and Tunisia both violent and nonviolent Islamist groups began to play significant roles, the impetus remained justice for all.

The terms citizen (muwatin) and citizenship (muwatana) have become a common concept among many secular as well as religious movements since the Arab uprisings began. Similarly, the concept of a social contract (‘aqd) between the citizen and the state has become the foundation for those seeking political reform. In 1995, the Muslim Brotherhood accepted the principle of the people’s sovereignty and the ummah, or collective community of believers, as the source of all power.

So it was a bit awkward in Cairo in March, when President Abdel Fattah el-Sisi declared that sectarian violence will not be permitted because “Egypt has a rule of law.” Since he became president, Sisi, like many other Arab leaders, has taken great steps to undermine the rule of law. When I traveled to Egypt in December 2016, I had never seen such repression of Egyptian society, and I have been living in or traveling to the country for twenty-five years. I lived in Egypt for five years when former President Hosni Mubarak was in office. Egypt then looked like a free country compared to the way it is now.

Putting aside the illegal coup that Sisi and his military cohorts launched against the Muslim Brotherhood to oust them from power in 2013, and the treatment of Brotherhood suspects now in prison. The rights of ordinary citizens are being curtailed even further: the press is virtually state-run; many human-rights advocates are in prison; the political system is not inclusive. The list goes on.

But despite Sisi’s false claims about the “rule of law in Egypt,” his point is important: there is a relationship between religiously motivated violence and a lack of citizenship in the Arab world. Extremist groups, such as ISIS, and opposition groups across the region are capitalizing on feelings that governments have no respect for individual rights.

In the last two weeks, governments have taken a number of regressive measures. In Bahrain, the parliament voted to change the constitution in order to try civilians in military courts. In reference to the constitutional changes, Justice Minister Khalid bin Ali al-Khalifa told lawmakers the amendment was necessary as military judges were “best placed” to deal with “irregular warfare.” In Morocco, representatives of the Shia community vowed to retaliate after the disappearance of their spiritual leader. In Kuwait, a deputy in the parliament requested that the Shia population be given citizenship, which was stripped away in the 1980s. Although the parliament has not taken official action, some political opponents had their citizenship rights restored over the last few weeks.

Such legal actions raise the question over sequencing. Which came first? The discrimination against religious minorities and then the legal justification to legitimize the discrimination, or vice versa?

In December, I met several scholars at Al Azhar, Sunni Islam’s most prestigious university. One of the most insightful was Hazen al-Kilani, who teaches at Al Azhar and at a private research institution. I asked him specifically about the climate in Egypt and views toward religious minorities, particularly the Shia, who comprise less than one percent of the population.

“In Egypt, the problem is bigger. It is about backwardness of thought,” he told me. “Our understanding about religion is deviating. It is an understanding that needs more time because we do not accept others.”

Although states must take the lead in restoring citizens’ rights and discouraging Arab societies from seeking security in extremist groups, there are still other obstacles. State-sanctioned religious scholars, such as those at Al Azhar, are losing authority among the masses. “There is the religion of the people and the religion of the state,” al-Kalani explained. “And even some scholars at al Azhar do not believe in the official state positions.”

Geneive Abdo is a senior fellow at the Atlantic Council. The funding for travel to the Middle East was granted by the Pulitzer Center.