The Fall of Spain's King Juan Carlos I 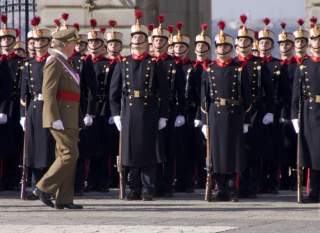 This past Monday, King Juan Carlos I of Spain announced his intention to abdicate in favor of his son Felipe, who is expected to assume the title of Felipe VI as soon as June 18. The announcement came as somewhat of a surprise, but, in light of the turmoil surrounding him these past several years, certainly not as a shock. He reigned for thirty-nine years, and was a popular and accomplished head of state for most of the first thirty-five of them. That all started changing some four years ago, when his oldest daughter, Elena, the Duchess of Lugo, divorced her husband, Jaime de Marichalar. That event would turn out to be the start of a string of health, corruption, and other crises culminating in a massive drop in the people’s appreciation for their monarch.

First, the king underwent lung, knee and Achilles tendon surgery, raising concerns over his ability to continue fulfilling his responsibilities. Then, in late 2011, the king’s son-in-law, Iñaki Urdangarín, Duke of Palma de Mallorca, a two-time Olympic handball medalist, was indicted for embezzlement of public funds. A few months later, in April 2012, as Spanish youth unemployment had soared to over 50 percent, the king broke his hip in Botswana, where he had traveled to hunt elephants, on a private jet subsidized by a Saudi businessman, with his Danish-German, self-styled princess-mistress Corinna zu Sayn-Wittgenstein. The king apologized publicly for his behavior, but his approval rating dropped by some 30 points in the span of a year. And as if that weren’t bad enough, his other daughter, Cristina, turned out to have been involved in her husband Iñaki’s shenanigans: earlier this year, she was formally charged with tax fraud and money laundering. As all of these scandals surfaced, stories that had barely been paid attention to were suddenly out in the open as well: What exactly happened when eighteen-year-old Juan Carlos accidentally shot and killed his younger brother? Did Juan Carlos have an affair with Lady Di? Was the king involved in a coup d’état in the early 80s? These questions are discussed more now than ever, and that in and of itself is a sign of how the mighty king, whose ancestors include Queen Victoria of the United Kingdom, Louis XIV of France and Holy Roman Emperor Charles V, has fallen.

Things were looking a lot better for the legacy of Juan Carlos I on February 24, 1981. The night before, Gil Scott-Heron had almost been proven wrong when the election of Spain’s new Prime Minister, Leopardo Calvo Sotelo, was interrupted by a group of armed Guardia Civil officers who stormed the Spanish Congress as cameras were rolling. The attempted coup d’état had been in the works for some time, and as Lieutenant-Colonel Tejero and his men fired submachine guns into the ceiling of the Congressional Palace, keeping both parliament and cabinet hostage for eighteen hours, Captain General Milans del Bosch’s tanks were rolling down the streets of Valencia. That night is when Juan Carlos brought lasting legitimacy to his position, by addressing the nation on television at 1:14am. In his military uniform, as the Captain General of the Armed Forces, he spoke for less than ninety seconds, expressed his support for the democratic process and effectively kept the military from returning to power six years after the death of El Generalísimo Francisco Franco.

That is not what El Caudillo had expected in 1969, when he named the thirty-one-year-old Juan Carlos heir-apparent and Prince of Spain. What he was looking for at the time was someone who could be trusted to carry on his corporatist dictatorship, and he chose Juan Carlos over his father Juan, the Count of Barcelona. He did so because he suspected the latter of leftist sympathies, even though he was the heir to the throne his own father, Alfonso XIII, had occupied until Spain became a republic for the second time in history in 1931. It wasn’t immediately obvious for the next six years either, as Juan Carlos remained publicly loyal to Franco and his regime. But he soon started communicating with opposition leaders, and within a year of the dictator’s death in November 1975, he replaced the Francoist Prime Minister Arias Navarro with the more reform-minded Adolfo Suárez. Less than a year later, most of the ingredients for a liberal democracy were in place: political parties had been formed, political prisoners freed, unions legalized and free elections held. And by the end of 1978, the newly elected representatives of the people had drafted a constitution that was passed by referendum, creating a political framework that has largely remained in place since, in no small part thanks to the king’s decisions on that February night in 1981.

It has so far been Spain’s most successful experiment with democracy ever. In 1982, it joined NATO; in 1986, a mere five years after 23-F (as the 1981 coup d’état is commonly referred to), Spain became a full-fledged member of the European Union. That said, the failure of its previous experiment, the Second Republic that lasted from 1931 to 1939 and ended with Franco’s victory in the Civil War, still matters even to today’s political dynamics. As soon as Juan Carlos announced his abdication, thousands of protesters in cities all over the country took to the streets with the red-yellow-purple flag of the Second Republic, chanting ¡España, mañana, será republicana!, and demanding a referendum on the choice between monarchy and republic. So far, the mainstream parties of center-left and center-right, PSOE and PP, have not expressed any support for such a plebiscite, but the PSOE’s historical opposition to the monarchy puts the social-democrats in an awkward spot. The personal popularity and untarnished reputation of Crown Prince Felipe and particularly, his wife Letizia, the granddaughter of a taxi driver and a former news anchor who reported live from Ground Zero after the 9/11 terrorist attacks, may yet keep things from spinning out of control.

But these are not the best of times for Spain and its monarchy. Deflationary pressures, an unemployment rate over 25 percent and abysmal growth continue to ravage the country’s economy and have put the future of an entire generation of Spaniards at risk. Meanwhile, secessionist forces continue to push for independence in Catalonia, while the political spectrum was turned on its head a few weeks ago in the elections for the European Parliament. PP and PSOE have gone from 80 percent to 50 percent of the vote, while the extreme left of the Occupy-inspired chavistas of Podemos (whose source of inspiration, Hugo Chávez, was memorably told to shut up by Juan Carlos in 2007) performed remarkably well. That King Juan Carlos saw the need to step down at such a moment in time can only be interpreted as a signal that he believed that his reputational dire straits were putting the unity of the country and the permanence of its political institutions at risk. His decision may reduce that risk. That said, if the rationale for sticking with a monarchy is that the king is a symbol that keeps the country together, this has not been a great test case.

Stan Veuger is a resident scholar at AEI. His academic research focuses on political economy and applied microeconomics. Follow him on Twitter: @stanveuger.