The False Promise of Petro Poroshenko 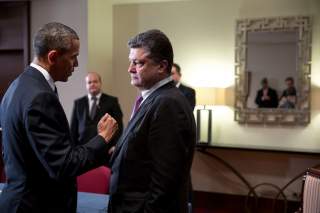 The habit of inviting foreign dignitaries to address Joint Meetings of Congress is one of the more longstanding, as well as dubious, American political traditions. Since 1874, according to the Office of the House Historian, 110 foreign dignitaries or heads of state have addressed a Joint Meeting of Congress, the most recent being President Petro Poroshenko of Ukraine, who appeared on the House rostrum last Thursday.

In his address Mr. Poroshenko cautioned that “if [the Russians] are not stopped now, they will cross European borders and spread throughout the globe,” and that the conflict in Ukraine is one between “civilization and barbarism.” He added, “[T]he only thing that now stands between the reality of peaceful coexistence and the nightmare of the full relapse into the previous century, into a new Cold War, are Ukrainian soldiers.” Given their performance in recent weeks, let’s hope not.

In keeping with a time-honored American political tradition, Mr. Poroshenko made sure to make all the right noises about the sacrosanct quality of “democracy.” Ukraine, he told Congress, is at the “forefront of the global fight for democracy” and “democracies must support each other . . . otherwise they will be eliminated one by one.” Channeling his inner William Wallace, he declared that Ukrainians have “an unbreakable will to live free.”

Poroshenko was doubtlessly aware that rhetoric of this sort works wonders in helping to secure Congressional largess. Michigan Senator Carl Levin said the speech was a “real rousing call to us to be supportive of their dreams,” while Tennessee Senator Bob Corker declared it “a great speech” and found it “just embarrassing…the way our administration has responded to Ukraine.”

President Obama, meeting with Poroshenko in the Oval Office after the speech, assured him, “You have a strong friend not only in me personally, but I think, as you saw in Congress today, you have strong bipartisan support here in the United States.” The administration then pledged to provide Ukraine an additional $60 million in nonlethal aid. And not to be outdone, the Senate Foreign Relations Committee unanimously passed the Ukrainian Freedom Support Act which would designate Ukraine (and Georgia and Moldova) a “major non-NATO member ally,” impose further sanctions on Russia and provide $10 million over three years to assist Ukraine in countering Russian propaganda.

This sequence of events is simply part and parcel of foreign leaders appearing before Congress to profess their devotion to democratic ideals, and then fly home and wait for the American eleemosynary assistance to start rolling in.

You can hardly blame Poroshenko: it’s worked for Ukraine before. In 2005 President Viktor Yushchenko had his turn before a Joint Meeting of Congress, where he said, “The Orange Revolution provided evidence that Ukraine is an advanced European nation sharing the great values of Euro-Atlantic civilization.” Afterwards, North Dakota Senator John Thune said that Yushchenko’s speech was “an affirmation that freedom is on the march.” Meeting with Yushchenko at the White House, President George W. Bush said that Ukraine was “an example of democracy for people around the world.” Bush then sought an additional $60 million from Congress to help aid the cause of “reform” in Ukraine. Plus ca change, plus c'est la même chose.

Yet for all the fulsome talk, then and now, of the America and Ukraine’s common democratic values, Poroshenko’s claim that the fight between Ukraine and Russia is one between “civilization and barbarism” merits some scrutiny.

Nearly coinciding with Poroshenko’s visit to Washington, Amnesty International released a report documenting a number of atrocities committed by both the rebels and by forces in the employ of Kiev. According to the Amnesty report, Kiev’s far-right Aidar battalion has been responsible for “abductions, unlawful detention, ill-treatment, theft, extortion, and possible executions.” Reports have also surfaced that far-right militias, taking a page from the ISIL playbook, have started beheading captive rebels. Newsweek, citing Ukrainian news sources, recently reported that the head of one such unfortunate was returned to his mother in the mail.

In a sense, these battalions are taking their cue from Kiev’s political class, which routinely employs dehumanizing language to describe pro-Russian Ukrainians. A senior adviser to Poroshenko, Yuriy Lutsenko, has referred to the residents of Donetsk as “Kremlin-poisoned citizens” while former Ukrainian prime minister Yulia Tymoshenko expressed her desire to kill Russians living in Ukraine with nuclear weapons.

Further, there have been ample reports coming out of Europe that cast a rather less-than-heroic light on Ukraine’s freedom fighters. In the UK, the Telegraph, the Guardian, the BBC and the Independent have all reported on the neofascist character of many of the volunteer battalions who—though they fall under the purview of the Ukrainian Interior Ministry—are largely funded by private donations. According to a report in the Telegraph, Andrei Biletsky, a leader of both the Azov battalion and the far-right Patriots of Ukraine (which has joined Prime Minister Yatsenyuk’s newly formed People’s Front coalition), has written that “The historic mission of our nation in this critical moment is to lead the White Races of the world in a final crusade for their survival…a crusade against the Semite-led Untermenschen.”

Yet if any of this was the cause of disquiet among Mr. Poroshenko’s legions of fan on Capitol Hill, you’d never know it. Likewise, pundits from across the political spectrum have labored mightily to paint Vladimir Putin as Hitler’s rightful heir. In a recent op-ed in the Washington Post, George F. Will noted that what really worried him about Putin was that his “fascist mind” possessed an “ethnic-cum-racial component” that renders it “Hitlerian.” Mr. Putin’s animus toward the West makes him “more dangerous than the Islamic State.” Former Deputy Secretary of State and the current CEO of Brookings Incorporated, Strobe Talbott, wrote in Politico that “what’s new about Putinism” is “the ultra-nationalist proposition that Russian statehood should be based on ethnicity.” Talbott concluded that Russia under Putin “is a potential threat to world peace.” And in a much discussed essay for The New Republic, Timothy Snyder opined that fascist ideas “are on the rise in Russia” and that “people can say what they like in Russian in Ukraine, but they cannot do so in Russia itself.”

These claims should be evaluated in light of several recent developments in Russia. In early September, Russia’s Presidential Human Rights Council proposed changes to a 2012 law requiring NGO’s to register as “foreign agents.” On September 8, a Moscow city court ruled that the election monitoring organization Golos was not required to register as a “foreign agent” under the act. This weekend roughly 20,000 protesters took to the streets of Moscow to protest Russia’s involvement in the Ukrainian crisis. Some waved the Ukrainian tri-color and while others held signs mocking Putin and the Kremlin. Other, smaller, antiwar (they could also fairly be characterized as anti-Putin) rallies took place in St. Petersburg and Yekaterinburg. The day of the rally, the former oligarch turned dissident Mikhail Khodorkovsky announced his return to Russian political life. In an interview in Le Monde he announced his intention to relaunch his political foundation, Open Russia, and discussed his willingness to return to Russia run for the presidency “in case it appears necessary to overcome the crisis and carry out constitutional reform." A longtime Russia-watcher blogged: “Mikhail Khodorkovsky is not a modern day Alexander Herzen. His openrussia.org isn’t The Bell. And Russian society today is not asleep, awaiting the White Prince. On the contrary, Russia is a beehive of activity and of free debate.” [Emphasis added].

All of this is certainly not to say that Russia is a model liberal democracy, that it has no far-right politics, or that the Russian government’s actions throughout the Ukraine crisis have been praiseworthy. It is to suggest, though, that the picture is more complex than the White House, the Congress and many pundits would lead us to believe. It would be closer to the mark to say that there is a party to the Ukrainian conflict that is at risk of backsliding into fascism. It just happens to be the one we’re supporting.