The Fed Is Trying to Avoid a Greenspan-Style Bubble 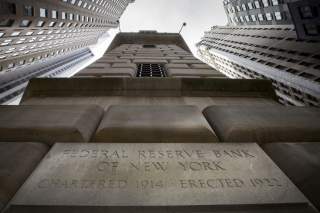 In his dissent against the Federal Reserve’s latest decision to raise rates, Minneapolis Fed President Neel Kashkari warned that the Fed was at risk of making a 1970’s style mistake—only in reverse.

Whereas the Fed of forty years ago was too slow to raise rates in response to high inflation, Kashkari’s idea is that, with both inflation expectations and realized inflation now declining, today’s Fed should rethink (i.e. lower) the trajectory of its policy tightening. This is a sort of “anti-Volcker” moment for the Fed dissenters.

For the past several years, the Fed has serially missed its 2 percent inflation target, and (the argument goes) the Fed needs to be truly committed to its target, or it will lose credibility. Already, the Fed has to explain the deviation.

Chair Janet Yellen’s statement expressed confidence in the eventuality of hitting 2 percent before stating that the Fed would look through the current weak inflation figures. While somewhat unexpected in its directness, Yellen’s statement is less than shocking. This Fed frequently sees oil as having only a transitory impact on inflation and takes care to avoid placing too much credence in subsequent readings. The culprit this time around happened to be wireless phone plans, but the pivot to unlimited data plans is realistically a one-time happening. In other words, choosing to call sharp, one-time movements in prices transitory is far from abnormal.

In its determination to continue down the tightening path, the Yellen Fed is attempting to avoid the Greenspan trap, meaning it wants to avoid keeping rates too low for too long which could create unwieldy bubbles, as the Greenspan Fed did with housing. In the process, today’s Fed is attempting to give itself ammunition for future downturns in economic activity. The indication here is that the Fed's reaction function—how it respond to economic data—has shifted at least somewhat toward a macroprudential framework, this being a sort of “do no harm” style of monetary policy that seeks to avoid building bubbles while not slowing the economy too much.

That sounds a lot like the definition of the natural, or neutral rate of interest. The natural rate of interest is the interest rate of “do no harm but do no good” that should neither accelerate nor decelerate the economy. Theoretically, after reaching this neutral zone inflation should be in the 2 percent area (emphasis on theoretically). At the moment, the U.S. nominal natural fed funds would be near 1.5–1.75 percent depending on inflation.

This is where the Fed wants to be, and it is not too far from where we are currently. The primary danger to the natural rate standard now is the downward trajectory of inflation. If it keeps falling, the Fed could overshoot neutral and accidentally tighten policy before it intends to do so.

This point of view is radically different from the anti-Volcker sentiment of 2 percent inflation at any cost. At issue is the supremacy of price stability, which the Fed believes is synonymous with inflation of around 2 percent, and which is, after all, part of the Fed’s official mandate (a claim that macroprudential policy cannot make).

Despite the logic of the anti-Volcker argument, however, it is likely to lose out to the macroprudential framework for a few reasons. Those on the Fed fearful of falling into the Greenspan trap believe interest rates can get to neutral and not prevent medium-term inflation from getting to 2 percent. This eliminates part of the argument for the anti-Volcker crowd, who suggest that continued rate hikes could squelch inflation. Second, the Fed is also likely wary of being blamed for the next bubble. By moving toward neutral, there may be some cover. Lastly, the Fed needs to reload its policy arsenal. There needs to be something other than the balance sheet to combat the next downturn. These three considerations are likely to outweigh the lackluster inflation readings in the near-term in dictating inflation pressure.

Another factor at play is the changing of the guard next year at the Fed. Without knowing who will be there and for how long, the current Federal Open Market Committee may want to have a balance sheet reduction policy in place before their successors take office. This dynamic may be far more important over the next six months than many market and Fed watchers think.

For the moment, it appears avoiding the Greenspan trap is more important to understanding the Fed’s path than the anti-Volcker’s. But neither side is likely to stand down quietly.