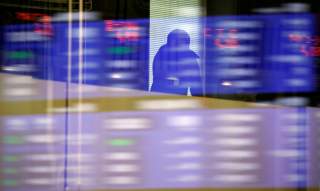 The mainstream financial media is enamored with the idea that the Federal Reserve, after “heroically rescuing us” from the “home mortgage meltdown” can now engineer a “soft landing.” The media believes that a group of economists sitting comfortably in the Eccles Building in Washington, D.C. can “mastermind” the most important economic signals of all: the price and amount of money. In effect, the financial media—e.g., CNBC’s Steve Liesman and his ilk, but not Rick “Tea Party” Santelli—believes that the Federal Reserve can pull and push its economic "levers" and twist its economic dials like the “man behind the curtain” in the Wizard of Oz. They believe that by pulling levers and twisting dials in just the right combination, interest rates will gradually rise, the Fed’s so-called “quantitative easing” program will slowly unwind, and more than $4 trillion in “out of thin air money” created since 2009 will be “retired”—without triggering a recession.

Would that it were true. Unfortunately, the Federal Reserve cannot accomplish this feat today. Why is this a certainty? Because never in its 105-year history has the Fed been able to so do, even facing less daunting economic challenges. Indeed, every "tightening" cycle in the Fed’s star-crossed history has been followed by an economic downturn (recession) or even a depression.

The truth is that when the Fed cuts interest rates or otherwise eases monetary policy, it is not "stimulating" the economy, as is claimed. What the Fed really is doing is distorting the two most important sources of information in the economy: the price of money (i.e., interest rates) and the supply (i.e., quantity) of money.

Prices, particularly of money, convey critical information to entrepreneurs and consumers. Shortages signal rising prices; shortages of money mean increasing interest rates—cash is king. Surpluses signal falling prices; too much money means falling interest rates—cash is trash. These price signals are then transferred to consumers, bankers and entrepreneurs who react to such prices by increasing or decreasing spending and borrowing and investing.

BUT, when the monetary system is manipulated, i.e., when it is controlled by the Federal Reserve and other central banks—including the European Central Bank, the Bank of Japan, the Bank of England, the Swiss National Bank and the People’s Bank of China—the price signals become warped. As a result, more and more false information (“fake news”) is forced into the economic system. The price of money, and therefore all other prices, which are a derivative of the price of money, are not real. They do not accurately reflect supply and demand. As a result, equilibrium prices (i.e., “market clearing prices”) are warped. Suddenly, “bad stuff happens.”

When interest rates are artificially low, as has been the case since 2009, investors and entrepreneurs are incentivized to take more risk than they otherwise would have taken. Businesses and consumers load up on debt that they otherwise could not afford and will not be able to pay back when rates rise. Corporations borrow hundreds of billions to buy back stock, warping their capital structures (i.e., increasing their ratio of debt to equity) and setting themselves up for defaults, bankruptcies and rapidly falling share prices when rates rise. Lenders extend credit to borrowers whom they otherwise would avoid, such as subprime auto loan borrowers, subprime real estate borrowers and subprime credit card borrowers—running the risk of systemic bank failure when rates rise.

This cycle has a name. Keynesians, who worship at the central bank altar, call it the "business cycle." They even warp the language to blame it on “business,” instead of blaming it on the real culprit: the Federal Reserve and other central banks.

Would the “business cycle” exist without the Fed or central banks? Indeed, there were “booms and busts” before the Fed. But they were far less severe and were more short-lived. In effect, free market pricing corrected the excesses faster and with less economic and human damage than the Federal Reserve.

As bad as the Fed’s overall track record has been, its manipulation of interest rates and the money supply has grown worse by the decade, largely as a result of the end of “anchored” money in August 1971. This was because money was no longer tied to a commodity like gold, so the Fed could now create money “out of thin air.”

For the past four decades, the Fed has attempted—in dark comedic fashion—to manage its own mismanagement. It has invented even more levers and dials to use in a never-ending attempt to fine tune what the Federal Reserve Chairman, his or her fellow board members and their collective staffs of hundreds of Keynesian economists cannot even begin to understand. More specifically, the Fed and its minions have not allowed each successive, and ever worsening, boom and bust cycle, which they created in the first place, to run its course. Instead, the Fed, lurching from crisis to even worse crisis, has responded to every downturn with even lower interest rates and even more "easy money" than before.

The Fed's response to the emerging markets crises of 1997–98 fueled the dot-com boom and its demise. The Fed’s response to that bust from 1999 to 2000 and its related recession enabled the 2008 housing bubble, which was encouraged by Congress for political reasons, and the Global Financial Crisis of 2009 that followed. The Fed’s response to that crisis, its coordination with central banks around the world to lower rates—even into negative territory in Europe and Japan—and print unprecedented amounts of fiat money, has created the biggest and most pervasive bubble the world ever has seen. Total world debt now exceeds $233 trillion, and the debt to “world GDP” ratio is 318 percent, down just slightly since hitting 321 percent in Q3 of 2016, the largest ratio in human history.

“Soft landing” coming? Do not bet on it.