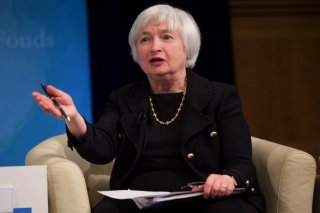 Policy transparency from the Federal Reserve, otherwise known as the Yellen Accord, allows other central banks to anticipate its actions and respond accordingly in their best interest. But forward guidance and transparency are now posing a problem for the Fed, and its recently articulated global mandate is a mechanism for diffusing it.

Global economic conditions can have an effect on the domestic economy of the U.S. This is the context in which the Fed laid out its reasoning for not raising rates in September. But in doing so, the Fed allowed for the potential impacts of the global economy—not the tangible impacts—to influence monetary policy decisions. Potential impacts can be interpreted broadly, and makes it difficult to see the boundaries of the reasoning.

The problem with forward guidance and transparency is the effect they can have on the dollar. Both the European Central Bank and the Bank of Japan figured out long ago that the Yellen Accord could help them achieve their own mandates. Essentially, the BoJ and ECB are magnifying the movements of the Fed for their own benefit. The fear is that the People’s Bank of China will do the same with its newly pseudo-floating (but tightly controlled) currency.

In many ways, the Fed’s global mandate puts some of the onus back on other major central banks. By saying that global economic developments are being taken into account, the Fed has warned the PBoC, BoJ and ECB that their actions will affect Fed policy decisions. Exploitation of the Yellen Accord will delay normalization. The Fed has tolerated other banks’ piggy-backing off its policy transparency for some time, but now it is making it difficult to enact policy. Although transparency and loose policy coordination are the new normal, the Fed is rightfully concerned with potential abuse and amplification of its actions by others.

The U.S. economy is not as strong as it typically is at this stage in an economic recovery. Disconcertingly for the Fed, it took three rounds of quantitative easing to get the economy to this point. Any mistake exiting zero interest rate policy will in all probability necessitate a return to QE or QE-esque policies. The Fed is averse to this outcome, and is erring on the side of extreme caution with its exit.

While the Fed’s global mandate has been developed, used and now seemingly deemphasized, its domestic mandate appears to be nearly satisfied. One of the price level machinations the Fed likes, the “trimmed mean PCE,” is close to the 2 percent level that represents a stable price environment. The labor market, for better or worse, is likely nearing full employment levels.

Domestically, a rate hike is justifiable; globally, it is different story. Other central banks are likely to take advantage of a Fed move, and the Fed now has the ability to cite them as the reason behind a “one-and-done” or similar policy outcome. The global economy will struggle to find its footing without sufficient monetary stimulus, and this will keep the Fed from being able to move interest rates higher, regardless of how much it lowers the bar domestically.

At some point, the Fed will need to move, regardless of how other banks are going to respond. Central banks are fighting to spark inflation and growth in a world where both are increasingly rare and fleeting. The boundaries of the Yellen Accord will continue to be pushed—the Bank of Japan’s move last Halloween and the ECB’s plan to revisit their QE package in December, when the Fed was expected raise, are examples. The Fed is correct to push back.

The consequences of the Yellen Accord are coming back to haunt the Fed. The Fed allowed the coordination to occur, and now it may be too late to stop it from causing it problems. Calling out global economic conditions was the Fed’s way of creating an escape when there is too much pressure on the dollar and the U.S. economy.