The Five Best U.S. Fighter Aircraft of All Time 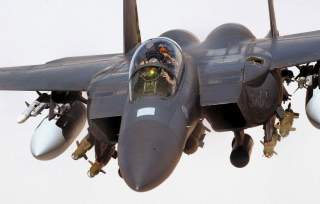 What qualities make a great fighter aircraft? Speed or maneuverability? Armament or ruggedness? How many enemies it shot down, or how often it managed to avoid being shot down?

Perhaps it is all of these factors, or none. Maybe greatness is just being the right aircraft in the right place at the right time. Whatever the reason, some fighters go on to become legends, while others are derided as turkeys.

Here are my five picks for the greatest U.S. fighter aircraft. Whether these are necessarily the best aircraft in terms of technical performance may be questioned. Then again, that which is best and that which is great are frequently not the same. But for whatever reason, these fighters went on to achieve fame.

By the autumn of 1943, the U.S. bomber offensive against Nazi Germany was in trouble. American commanders expected massed formations of B-17 and B-24 bombers, each plane bristling with ten machine guns, to fight their way through Nazi air defenses without fighter escort. But someone forgot to explain that theory to the Luftwaffe, which hit the bombers with everything it had, including heavy cannon, air-to-air rockets and probably the kitchen sink if they could have stuck a cannon or rockets on it.

American bombers suffered devastating losses; in the October 1943 raid on Schweinfurt alone, 20 percent of the bombers were lost. At that rate, there wouldn't be any bombers left for the bomber offensive.

The obvious solution was to provide fighter escorts. Yet the primary American fighter in Europe, the P-47 Thunderbolt, lacked the range to escort bombers beyond the western edge of Germany. The P-38 Lightning had range, but proved unsuitable for high-altitude combat over northwest Europe. Bureaucratic politics delayed the use of drop tanks, but even then, the Germans could engage the Thunderbolts and force them to drop their tanks early.

Enter the P-51 Mustang, the unlikely offspring of an American aircraft cursed with mediocre performance until fitted with a British Merlin engine. The new Mustang was fast, maneuverable, had reasonable firepower and, most important, its 1,500-mile range meant it could escort bombers all the way to Eastern Europe.

Unlike the heavy and rugged Thunderbolt, the P-51 was lighter and more fragile, with a liquid-cooled engine vulnerable to damage. But the Mustang placed the Luftwaffe in the crosshairs of a dilemma; German interceptors needed heavy cannon and armor plate to shoot down heavy bombers, but that in turn made them easy prey for the nimble Mustangs. Without the Mustang, the American bomber campaign might have withered, thus lengthening the war.

The "Whistling Death," as the Japanese dubbed it, was a formidable aircraft. Immortalized in the TV series "Baa Baa Black Sheep," the F-4U was a relatively large fighter with a distinctive profile marked by gull wings and a big, powerful engine.

It was designed as a Navy fighter, but it was so fast that it couldn't land on U.S. Navy carriers (at least until the Royal Navy showed them how). So the Corsair made its reputation as a land-based Marine Corps fighter in the Pacific. Fast and maneuverable, and especially formidable in vertical combat maneuvers, the Corsair quickly proved it could master Japanese fighters. Its post-1945 record as no less distinguished; it served as a fighter-bomber in Korea while the French used them at Dien Bien Phu.

A favorite topic of air-combat enthusiasts is whether the Corsair was better than the Mustang or Thunderbolt. With a range of nearly a thousand miles, the Corsair wasn't quite as long-legged as the Mustang, but it still could have escorted many bomber missions. How it would have performed against Messerschmitts and Focke-Wulfs is left to history's conjecture.

How would the Korean War have turned out if the United Nations had lost control of the air? It hardly bears thinking about. UN ground troops had enough problems confronting massed North Korean and Chinese armies, even with massive air support. Without UN control of the skies, South Korea might have been conquered, and Korea today might be unified in a single nation where northerner and southerner both eat grass to survive.

Yet for a time, it seemed that the Communists might achieve air superiority. The advent of the Soviet MiG-15 was a shock to UN pilots flying early-model jets like the F-84, or propeller-driven World War II aircraft like the P-51 Mustang. Mighty B-29 Superfortresses, even with heavy fighter escort, took so many losses over North Korea that they had to switch to night bombing to survive.

Fortunately, the United States had the F-86 Sabre. When Sabre met MiG-15, the world knew that the Jet Age of aerial combat had arrived. It was a fascinating duel between two aircraft of differing but formidable capabilities. The lighter MiG could outclimb the Sabre, had a higher acceleration and ceiling that enabled it to dive down on the American fighter and packed a heavier cannon-based armament. But the Sabre could dive faster, was more stable during dogfighting maneuvers and had a radar gunsight.

What really added spice to the duel were the men in the cockpits. While U.S. pilots tended to be better trained than their Cold War opponents, that wasn't always true in Korea. North Korean and the Chinese "volunteer" pilots they could handle, but the Soviets covertly sent their best World War II aces to Korea, who proved to be dangerous adversaries. U.S. pilots were also hampered by rules of engagement that barred them from taking the battle to Communist MiG bases across the Yalu in China. Meanwhile, the United States reserved the bulk of its airpower to guard against a Soviet invasion of Western Europe, thus leaving no more than a few squadrons of F-86s for Korea.

But the Sabre performed well. Both sides claimed an enormous number of enemies shot down; the United States claimed a 10:1 kill ratio in favor of the F-86, though recent research suggests the true number was less than 2:1. Nonetheless, a small number of Sabres managed to keep control of the skies, and possibly prevented the Korean War from escalating into World War III.

Yes, it was aerodynamically ugly, proof that even a brick could fly if you stuck two big jet engines out of it. But it is out of such bricks that are legends built.

The F-4 did not have a promising start. It started life as a misguided Pentagon attempt to turn a Navy carrier-based interceptor into a common fighter for all the services. The Pentagon still has not learned its lesson; today's F-35 started as a Marine Corps strike aircraft that became a multiservice and multinational fighter.

It was also designed with a wrongheaded philosophy. Just as the F-22 and F-35 were designed on the premise that stealth was everything, the Phantom was designed with the expectation that 1960s air combat would be a long-range missile duel where the adversaries would never see each other. So why would a fighter need air-to-air cannon and dogfighting performance? Unfortunately, restrictive rules of engagement, as well as technical limitations of early missiles like the radar-guided Sparrow, meant that the Phantom had to engage in close-range knife fights with smaller and lighter MiGs that were expressly designed for dogfighting.

The F-4 should have been a disaster, but the amazing thing about the Phantom was that it worked. Though it might not have been the best fighter in terms of pure performance, it was powerful, rugged and versatile. It served in conflicts around the world, from Hanoi and the Suez Canal to Iran and Turkey, as fighter, attack aircraft and reconnaissance ship.

For the West and its allies, the Phantom was the primary fighter for much of the Cold War.

The F-15 was the epitome of late–Cold War, U.S. fighter design, and a demonstration of what America could achieve when it put its mind to designing a real fighter.

Blessed with two powerful engines that gave it a very high thrust-to-weight ratio, the F-15 could accelerate while in a vertical climb. It had a capable radar and missiles for long-range aerial combat, but unlike the Phantom, its low wing-loading made it highly maneuverable.

And what of America's newest fighters, the stealth-centric F-22 and F-35? The F-22's combat history is limited to a recent and brief strike mission over Syria, while some would argue that if the F-35 joins the list of best American fighters, miracles must exist. But the truth is that we won't really know whether the latest generation of U.S. fighters is destined for greatness until they really have been tested in combat.

Michael Peck is a contributing writer at Foreign Policy and a writer for Waris Boring. Follow him on Twitter:@Mipeck1.