The Flaws of Obama's 'Strategic Patience' 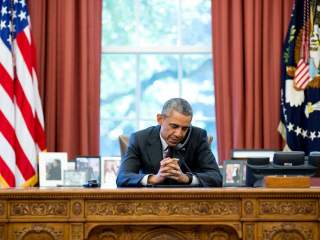 A common refrain among foreign policy pundits is to declare that the Obama administration has no strategy, that the president and his team are focused only on short-term, tactical approaches and that, as a result, the United States is strategically adrift in the world. This response has become more pronounced in recent months with the apparent willingness of the president to offer concessions to putative adversaries and to proffer generally symbolic responses to the efforts of revisionist powers to probe the depth of American commitment and resolve. Many Congress members (both Republicans and Democrats) are perplexed by an administration that eschews sending weaponry to Ukraine, does not respond more forcefully to Russian and Chinese moves in the Middle and Far East, normalizes relations with an unreconstructed Castro regime in Cuba and seems outmaneuvered by the Islamic Republic of Iran at the negotiating table.

Of course, it helps to re-read the second iteration of its National Security Strategy issued by the Obama administration last year. National Security Strategies are often ignored, seen as a legislative box-checking exercise, but they still, in the end, are meant to reflect the President's thinking. Although a concept only explicitly discussed in the president's letter of transmittal, the common underlying theme is that of "strategic patience." As Obama's former advisor on the so-called "Central Region," Dennis Ross, noted earlier this month, Obama's view on foreign policy is heavily shaped by America’s experience of the Iraq War. In the president's analysis, the United States blundered into a conflict like the proverbial bull in a china shop, not only destabilizing the region for years to come but also draining America of its power and strength. Sure, for the first year or so after the invasion of Iraq George W. Bush looked like a strong and decisive leader, and the United States rode high in the aftermath of a quick decapitation of Saddam Hussein's regime. But the ultimate price that the United States has paid, and will continue to pay, outweighs any of the short-term, ephemeral gains produced by the dash to Baghdad. To some extent, the buyer's remorse that Obama felt after the Afghan surge in 2009 and the Libya intervention in 2011 has reinforced his preferences in these matters.

So what undergirds Obama's sense of patience? This year's State of the Union address was one of the clearest explanation of Obama's vision. The president has faith that the potential and actual challengers to the United States cannot sustain that challenge for the long haul. Putin's regime in Russia, Xi Jinping's China, the rule of the Castros in Cuba, Hassan Rouhani's Islamic Republic, even the conglomeration of former Iraqi and Syrian territories that now form the so-called caliphate of the Islamic State (as well as their other outposts in Africa)—none of these have a viable, long-term future. Each is beset by a number of internal contradictions that will either force them to moderate and change their behavior, or face collapse. Washington needs to hold the line and find ways to accelerate the pressure exposing these contradictions, but does not need to engage in off-the-cuff, impulsive, heavy-handed reactions to events, which drag the United States into new conflicts just to display power and resolve, as, in his mind, so many of his critics seem to advise.

From the president's view, the Iran deal is a bad deal only if you assume that there will still be an Islamic Republic in its current form and incarnation fifteen years from now. Obama apparently believes that the forces of change and reform cannot be bottled up for long, and that newer, younger leaders in the Islamic Republic will preside over its reformation along more liberal, Western lines. By the time Iran is free to again achieve a nuclear status equivalent to that of Japan, Washington's worries (along with those of Israel and Saudi Arabia) about Tehran possessing such capabilities will have dissipated—just as we are currently unworried about Tokyo's ability, given its nuclear and space capabilities, of becoming a nuclear weapons state.

And according to this perspective, if Russia is on a glide path to collapse, why provoke a proxy conflict in Ukraine? Sure, it is not ideal in the short term for the Ukrainians, who must deal with the loss of Crimea and a frozen conflict in the Donbass, but sending weapons would only accelerate the suffering and destruction. Instead, if Putin's governance of Russia collapses from the economic pressure of sanctions and low energy prices, in a few years Ukraine will be able to recover its lost territories and resume its westward path to integration. Similarly, spending a great deal of resources to build up the U.S. position in the Pacific to respond to the construction of a few artificial islands in the South China Sea makes no sense if China cannot sustain its path forward to superpower status.

What might sustain such a faith? Recall that the last cohorts of the Baby Boomer generation, and the first wave of Generation X which followed behind, came to political maturity in the last gasps of the Cold War against what was portrayed as a massive, formidable Soviet entity—which in reality was in the final stages of collapse. In 1979, things looked grim for the West: the Soviet invasion of Afghanistan, presaging a new drive to the Persian Gulf, coupled with the overthrow of the Shah in Iran; Soviet-backed regimes on the move in Africa; a new peace offensive in western Europe threatening the cohesion of the NATO alliance; Sandinistas marching into Managua and rebels gaining ground in El Salvador, creating the menace of a Soviet spearhead pointing at the very southern underbelly of the United States. Twelve years later, this seemingly unstoppable force had collapsed. The Ivan Drago of Rocky IV had been replaced by the television-comedy stock figure of the ex-Soviet scientist or general officer, scrounging in Los Angeles or New York as a cab driver or janitor.

Looking back, one might even conclude that the United States had overreacted to a phantom Soviet threat by plunging itself into debt to rebuild its military and even risking a nuclear war, as a result of new exercises meant to show Western resolve and preparedness. If that is the lesson, when faced with new threats today is not the appropriate response to contain them, minimize the disruption they can cause and just wait for their collapse? So what if relations with Cuba are normalized without obtaining some of the preconditions that previous American regimes had set? What does it matter if some U.S. sailors were captured by Iranian Revolutionary Guards—as long as they were released quickly, without harm? These regimes have no future in the twenty-first century, and there is no reason for the United States to expend time, effort and resources—and perhaps unleash unintended consequences—in precipitous action.

Indeed, China's economy is faltering, Iran is facing major demographic and economic challenges and it becomes harder to see, under conditions of twenty-eight-dollar oil, how Russia can sustain its current position. Indeed, slowdowns across the BRICS nations call into question whether they can create viable alternatives to Western institutions like the IMF and the World Bank. Meanwhile, the United States can continue its recovery and begin to cement its position as the keystone state of the international economic system, at the heart of two major trading systems for the transatlantic and trans-Pacific basins.

Of course, the view that the United States overreacted after 1979 when the Soviet Union was headed for an inevitable collapse can be challenged by the assertion that the Soviet collapse only occurred because the America was willing to challenge the USSR, and to force it into bankruptcy. Perhaps in the coming legislative elections in Iran, the winners will not be closet Western liberalizers and secularists, but those who hope to restore the revolution and Iran's traditional foreign policy aims, and who would see the recent Iran deal as vindication of their approach. Perhaps Russia will find a way to achieve some of its geopolitical goals and reactivate some of its former key trading relationships to stave off sufficient economic collapse for the regime to reconstitute and replicate itself.

There are certainly plenty of indicators to suggest that the president's faith is not farfetched, but not enough to declare with confidence that things will proceed along the course he has outlined.

In the meantime, most governments are not making policy based on long-term assessments. They are reacting to the ability of current governments and leaders in Moscow, Beijing and Tehran to project power, exert influence and even take losses to achieve immediate ends. Will they decide to hedge their bets over the coming year, waiting to see who next occupies the White House? If so, while the administration aspires to cement its legacy during its final year in office, 2016 may prove to be a much more volatile year.

A favorite theme of the president is that of the arc of history bending towards justice, a metaphor he uses not only for domestic policy, but international affairs as well. The administration's gamble for its last 365 days in office is that the arc does not need a great deal of forcible bending on the part of the United States.