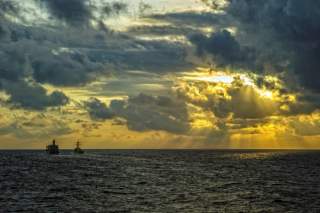 Recent months have witnessed an impressive Chinese diplomatic blitzkrieg, with President Xi Jinping and Premier Li Keqiang feverishly courting friends and foes alike, proposing ambitious trading agreements and acquiescing to various confidence building measures (CBMS) aimed at de-escalating geopolitical tensions in the region. But China’s intensifying legal battle with the Philippines has injected new uncertainties into the picture. What has emerged in recent days is a new chapter of confrontation between Beijing and its Southeast Asian neighbors, particularly Manila and Hanoi. Interestingly, the United States has joined the legal fray by expressing its stance on—or, to put it more accurately, criticism of—China’s expansive territorial claims in the South China Sea.

On the one hand, there have been considerable diplomatic gains in the past few weeks. To prevent accidental clashes in the high seas and the skies, Beijing signed CBMs with Washington and green-lighted the resumption of (mid-level) talks between Chinese and Japanese agencies, which oversee security and foreign-policy issues. China has also proposed a defense hotline with the Association of Southeast Asian Nations (ASEAN), dangled $20 billion in development loans and offered to host a high-profile meeting between the defense minister of China and his Southeast Asian counterparts next year. Chinese and Vietnamese defense ministries also reportedly signed (an additional) hotline, with both Communist countries agreeing to revive deeply frayed bilateral relations.

To cap it all, China also, more or less, finalized negotiations over a Free Trade Agreement (FTA) with Australia and is on the verge of completing an agreement with South Korea; these are two key American allies that snubbed Beijing’s newly-inaugurated Asian Investment Infrastructure Bank (AIIB). It was a clear demonstration of China’s willingness to overcome short-term annoyances in favor of gaining long-term diplomatic leverage. Nonetheless, China is still grappling with the legal conundrum presented by the Philippines’ bold and historic decision to seek compulsory arbitration in the South China Sea. It has recently ignored a deadline for a statement on the Philippines’ case against it, dismissing the Philippines’ claims altogether. To China’s chagrin, the U.S. State Department also released a position paper (December 5) on the legal aspects of the maritime disputes, while Vietnam has decided to explicitly support the Philippines’ legal maneuver and threaten a similar action.

The Fog of Law

On the surface, China’s claims seem to be unambiguously ambitious and provocative. Latest Chinese maps indicate Beijing claims sovereignty over almost the entirety of the South China Sea. Drawing on the doctrine of “historical rights”, China claims “inherent and indisputable” sovereignty over much of the South China Sea. A deeper look, however, reveals the inherently ambiguous nature of China’s claims: It is still unclear whether China is treating the disputed waters as a virtual internal lake, or, alternatively, only laying claim to individual features and their surrounding territorial waters. Beijing has yet to clarify the precise coordinates of the “nine-dash-line” doctrine, which hasn’t been consistently laid out in Chinese documentations.

The emerging consensus is that the ambiguity is deliberate and strategic: China, through its expansive (but imprecise) cartographic claims, can project toughness and patriotic ambition before a hypernationalist domestic audience without risking the legal ramifications of explicitly defending what many see as inherently indefensible maritime claims.

Lawyers rarely agree on anything. But based on my recent conversations with leading international-law experts, here in the United States and beyond, practically everyone agrees that China’s notorious “nine-dash-line” doctrine has little basis in modern international law, specifically the United Nations Convention on the Law of the Sea (UNCLOS). As an artery of global trade, the South China Sea is by no means a bay or any near-coastal water that can be subjected to historical, rights-based claims. Not to mention, China has neither exercised continuous and uncontested control over the area, nor have its neighbors formally accepted China’s ambitious claims. Throughout the postcolonial period, China’s newly independent Southeast Asian neighbors, from the Philippines to Malaysia and (South and North) Vietnam, have assiduously sought to fortify their positions in the South China Sea.

The UNCLOS, which came into effect in the immediate aftermath of the end of Cold War, provided new sets of principles to guide maritime sovereignty claims, determine maritime delimitation issues and steer a rules-based resolution of territorial disputes. As a signatory to the UNCLOS, all key claimant states in the South China Sea are expected to play by the existing rules of the game. (Although Washington is not a signatory to the UNCLOS, thanks to the intransigence of a hardline minority in the U.S. Senate, it has observed the principles of UNCLOS in actual policy.) To be fair, China has (under Article 298 of the UNCLOS) opted out of compulsory arbitration over territorial delimitation, military and sovereignty-related issues. So it should come as no surprise that Beijing has boycotted the arbitration procedures, initiated by the Philippines (under Article 287 and Annex VII of the UNCLOS) in 2013, under the aegis of the Arbitral Tribunal at The Hague.

Shortly before the December 15 deadline to submit its defense to the Arbitral Tribunal, China released (December 7) a position paper, which forwarded three major arguments: First, the arbitration body has no jurisdiction over the Philippines’ complaint, which fundamentally concerns questions of sovereignty; second, China has “indisputable and inherent sovereignty” over the disputed features in the South China Sea, since its “historical rights” transcend the jurisdiction of the UNCLOS; and lastly, the Philippines has violated prior agreements, both bilateral and multilateral, by initiating compulsory arbitration over the South China Sea disputes.

The Philippines, however, maintains that it is precisely China that has violated prior agreements, particularly the 2002 Declaration on the Conduct of Parties in the South China Sea (DOC), which explicitly discourages competing parties from unilaterally altering the status quo in disputed areas. In recent years, China has expanded construction activities in both the Paracel and Spratly islands, widened its paramilitary patrols across disputed waters and coercively challenged the Philippines’ claims in the Scarborough Shoal (2012) and the Second Thomas Shoal (since mid-2013).

Moreover, the Arbitral Tribunal, the Philippines argues, has the mandate to determine whether the complaint against China falls under its jurisdiction, despite China’s expressed opposition to compulsory arbitration. To skirt around the issue of sovereignty, which transcends the jurisdiction of the Arbitral Tribunal, the Philippines astutely framed its case as one that concerns (i) the determination of the validity of China’s claims based on the provisions of the UNCLOS, and (ii) the determination of the nature of the disputed features (Article 121), specifically whether they can be appropriated, as well as generate their own territorial waters. It is conceivable that the Arbitral Tribunal will assert jurisdiction over the disputes, as well as assess the merits of the Philippines’ memorial before the end of 2016.

Although the United States doesn’t take a position on competing sovereignty claims in the South China Sea, it has indirectly supported the Philippines’ position by (i) calling for the resolution of the disputes in accordance to the international law (i.e., UNCLOS) and (ii) explicitly questioning the validity of China’s “nine-dash-line” doctrine. As a treaty ally, Manila, quite naturally, expects maximum support from Washington amid the ongoing disputes. So far, however, the Obama administration hasn’t explicitly guaranteed American military support in an event of conflict over disputed features within the Philippines’ 200-nautical-mile Exclusive Economic Zone (EEZ). The Obama administration is engaged in a broader balancing act, which tries to maintain stable bilateral ties with China on one hand, and express American commitment to its bilateral security alliance with the Philippines on the other.

Certainly, Vietnam upped the ante by joining the legal fray, submitting its position paper to the Arbitral Tribunal in The Hague. Hanoi expressed its support for the Philippines’ case, rejected China’s “nine-dash-line” claims and called for the arbitration body to take into consideration Vietnam’s sovereignty claims and interests in the South China Sea. Vietnamese prime minister Nguyen Tan Dung, who is widely seen as a firm supporter of a stronger Vietnamese-American strategic partnership, went so far as declaring: “We are prepared and ready for legal action…We are considering the most appropriate timing to take this measure.” Meanwhile, Vietnam’s two most-advanced Russian-made warships (HQ-011 and HQ-012) made a historic port call to the Philippines, underlining a blossoming Philippine-Vietnam partnership and displaying Vietnam’s rapidly growing conventional-military capabilities. Obviously, Filipino officials were ecstatic, with the Department of Foreign Affairs exclaiming: “Vietnamese position is helpful in terms of promoting the rule of law and in finding peaceful and nonviolent solutions to the South China Sea claim.”

It is, however, unclear whether Vietnam is fully committed to joining the Philippines in initiating compulsory arbitration over the South China Sea disputes. After all, Vietnam’s leading officials have tirelessly sought to revive communication channels with Beijing in an effort to revive bilateral ties and prevent a dangerous showdown. It is quite possible that the Vietnamese leadership simply felt compelled to show solidarity with the Philippines, as well as project a tough image on the issue in light of growing domestic clamor for stronger defense of Vietnamese claims in the South China Sea. As Vietnam expert Carl Thayer wryly puts it, Hanoi’s decision to express its stance—without formally initiating an arbitration procedure against China—represents “a cheap way of getting into the back door without joining the Philippines’ case.”