The Fog of War Just Got Thicker: U.S. Warplanes Have Trouble Communicating with Each Other 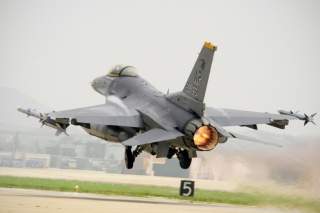 Even after over a decade of war in Iraq and Afghanistan, America’s armed services field incompatible aviation technology that hinders battlefield communication between U.S. Air Force, Navy and Marine Corps combat aircraft. The Pentagon is making an effort to fix the problem, but whether it will succeed is an open question.

The problem is the Link-16 datalink that is supposed to be standard across the North Atlantic Treaty Organization (NATO). However, while standardization is the aspiration, real-world execution falls short.

“Link-16 grew up as a kludge of different user inputs, which is how we ended up with a bunch of incompatible message sets,” said one senior Air Force official. “Fixing it would drive big OFP [operational flight program] bills to all the user platforms to change their implementations, so it'll probably stay the way it is for quite a while.”

(Recommended: China Can Thank Nazi Germany for Its Carrier-Killer Missile)

One example of where integration between the Navy and the Air Force falls short is in suppressing or destroying enemy air defenses. That mission will only grow more important as the United States tries to extract itself from the wars in the Middle East and refocus on the Pacific theater, where countries such as Russia and China possess extremely formidable air defenses.

While the current integration effort between the Air Force’s Lockheed Martin F-16CM Fighting Falcon and the Navy’s Boeing EA-18G Growler electronic attack aircraft is quite good, this is mostly because air-crew training overcomes hardware limitations.

“EA-18G and F-16CM integration is awesome, but not nearly as awesome as it could be,” said another Air Force official. “They use different Link-16 messages, and therefore pass widely different information to one another.  But if they were a part of the same family, they would be using the same requirement for sharing information, and that would improve their already impressive performance.”

Right now, Navy and Air Force pilots work around the limitations of the Link-16 datalink by developing tactics to overcome those issues. “The guys have great tactics set up for overcoming that.  And tactics are cheaper than technology,” the second official said. “I would like my EA-18Gs and F-16s to perfectly communicate with each other.  They would be better for it.”

Other Air Force and Marine Corps pilots agreed that the Link-16 has compatibility problems, but they can work around the problem, even if the situation is not ideal. “[It’s] mostly a training issue...which doesn't make it okay,” said one senior Marine Corps aviator. “Bottom line is yeah, we don't do the best job between services. Standard really.”

But why does the Link-16, which was designed to be a standard NATO datalink, have so many communications problems? While the basic hardware and software are more or less compatible, it is the messages that different services transmit across the datalink that are incompatible.

Link-16 requires three things to work—a reference time, crypto keys and a network data load (NDL). “The first two are pretty standard/binary,” said a third senior Air Force office. “It either works or does not.”

The real problem stems from the NDL. The NDL dictates which aircraft are able to connect to each other and what messages are passed between them and at what rate. “The NDL sets the ‘rules’ on who talks to who, at what rate, messages passed, etc.,” said the senior official. “If the NDL is set up correctly to allow aircraft to talk to each other, no matter the component, there should be no degradation in performance. If the NDL is built to limit, say F/A-18 messages, then an F-16 wouldn't see all that it could because of the way the NDL is set up.”

There is no easy solution to the problem, according to multiple Air Force, Navy and Marine Corps official. Fixing Link-16 so that it is compatible across the three service’s aircraft would be expensive. “That would be expensive in its own right, and require an awful lot of proprietary barriers to be wished away,” the second Air Force official said.

Theoretically, many of these compatibility issues will resolve themselves when the Lockheed Martin F-35 Joint Strike Fighter (JSF) becomes operational. The F-35 uses the Link-16 datalink, but it also has its own JSF-to-JSF multifunction advanced datalink (MADL) that is designed to transmit data without giving away the jet’s position. One of the ideas behind the F-35—which comes in three variants for the Air Force, Navy and Marines—was to have common mission systems and datalinks that would allow for seamless integration between the services. However, it remains to be seen if the F-35 delivers on those promises. “I'm not sure the F-35 is the solution,” said a senior Air Force official. “It’s best to recall that advances are made in pregnant ways, punctuated equilibrium is the best analogy, rather than one of constant progress.”

At least on paper, the Pentagon is making progress integrating its forces much more closely together. For example, the Pentagon’s Air-Sea Battle office is tasked with trying to foster integration, but how successful they will be is an open question.

“In theory, the U.S Navy and U.S. Air Force are beginning to draw much closer together to preclude those silly—largely proprietary—barriers of integration,” said the senior Air Force official. “In practice, well, that's yet to be seen.”