The Folly of Urging Even Greater Syria Intervention 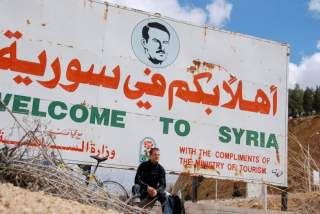 There’s been a lot of silliness over the past two weeks on the subject of Syria’s civil war. And I’m not only referring to the verbal banana peels of Libertarian presidential candidate Gary Johnson, who recently wondered aloud on “Morning Joe” what an Aleppo was. The real sophistry has been emanating out of that august paper of record, the Washington Post.

It began with an op-ed by Anne Applebaum, a distinguished Russia scholar who tends to fall on the hawkish side of the foreign-policy spectrum. Applebaum, flipping the script on restraint advocates, deplores the calamitous non-intervention in Syria. Though she concedes that a marshaling of American military forces might have “ended in disaster,” she counters that “sometimes it’s important to mourn the consequences of nonintervention too,” which include Syria’s sanguinary death toll, the destabilization of the Middle East and Europe’s migrant crisis.

Where to begin? America did intervene in the Syrian conflict through at least two operations, one run by the CIA and one run by the Pentagon, to arm the anti-Assad rebels, a strategy that proved wildly ineffective and lucrative for terrorists. All the way back in 2013, intelligence officials were warning that the Nusra Front, then Al Qaeda’s franchise in Syria, was the strongest and best equipped of the rebellious factions, and the future Islamic State was lurking nearby, too. A better question to pose is: what would have been the consequences of deeper intervention, as originally mulled by President Obama? It likely would have made matters worse by bolstering the side that’s teeming with Sunni jihadists.

Further, it doesn’t follow that because we didn’t intervene more abundantly, we own what’s happened in Syria. If this was a sin of omission on America’s part, and by extension its government, then other presidential administrations have some serious penance to do. FDR must be faulted for not intervening in the Spanish Civil War, even though both sides were guilty of atrocities and neither was compatible with American liberalism (death toll: five hundred thousand). Ronald Reagan should be asterisked with the Lebanese Civil War, from which he withdrew American troops (death toll: 150,000). But the blood is most viscous on the hands of George W. Bush, elected in the middle of the Second Congo War, the deadliest conflict since World War II: death toll between three million and 7.6 million.

Sometimes, noninterventions do end up haunting us. Bill Clinton will forever be tormented over whether he could have ameliorated the Rwandan genocide, because he knew it was happening, because UN troops were already in place and because the general in charge, Roméo Dallaire, says it could have been prevented with a minor additional commitment. But that’s very different from directly linking American inaction to foreign violence, with its silly presumption that failing to stop a crime you have little control over has the same moral freight as actively enabling a crime. American power, though daunting, is also limited, and its record of recent overseas interventions is fairly abysmal. There have been roughly 150 major civil wars since 1945; they weren’t going to stop because we decided to project our power around the world.

Meanwhile, and per usual, the Post’s editorials are aglitter in magical thinking. After Turkish tanks stormed into the Syrian border town of Jarabulus, ostensibly to seize it from Islamic State but realistically to ward off the Kurdish forces who had advanced there, Post editors issued a dispatch calling the scrum “the inevitable product of President Obama’s narrow and attenuated engagement in Syria.” Why? Because the White House “sought to mobilize and support local forces in eliminating the Islamic State”—first among them the Kurds, Turkey’s foes—“without forging a consensus” between the different factions.

The Post never specifies how the United States was supposed to elicit kumbayas from the Turks and Kurds, when the PKK is setting off bombs in eastern Turkey, and Erdoğan is determined to stop Kurdish elements from carving off their own state. The incentives for both sides are powerful, and it’s unclear how America was supposed to match them, especially following the recent coup attempt, when Turkey is more skeptical of Washington than ever. Yet the Post continues edictally: “What’s needed is a broader Turkish-Kurdish settlement, including Kurdish militants in Turkey whom Mr. Erdogan once courted and now wars against, and a plan for a federal Syria not dependent on either Bashar al-Assad or Vladi­mir Putin.”

It calls to mind the Underpants Gnomes from South Park: “Step one: America gets more involved. Step three: Turkey and the Kurds reconcile, and Syria becomes functional!” What constitutes step two is never explicated. Far be it for me to defend this president’s schizophrenic Syria policy, but the liberal internationalists at our capital’s favorite newspaper have gone unicorn spotting. We cannot manage the Syrian conflict, a hopelessly complex bramble of conflicting factions and interests. Those who insist otherwise should be made to put some concrete behind their pixie dust.