The (Former) Soviet Empire Strikes Back 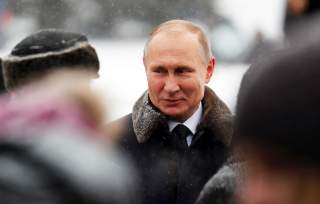 It took quite a while but the Trump administration, in the recently released National Security Strategy and National Defense Strategy, is finally talking about Russia as a strategic competitor. But before the national-security bureaucracy gathers a head of steam to wage Cold War 2.0, Washington should take a deep collective breath and approach this challenge with patience, realism, prudence and restraint to avoid overreaching as it seeks to protect core American interests.

Since 2012, Russia has been conducting a sophisticated, well-resourced and generally successful campaign to reassert its global influence at the expense of the West. Still, it is by no means obvious, as the new National Defense Strategy claims, that Russia wants to shape a world consistent with its authoritarian model and gain a veto over the economic, diplomatic and security decisions of other nations. It is equally unclear whether the administration has the resolve or capacity to mount an effective and sustainable response to global Russia, given Trump’s preternatural instinct to give Putin a pass on aggressive Russian behavior and a disorganized interagency decisionmaking process.

Russia’s meddling in the U.S. political system is part of a broader global campaign to undermine what the Kremlin sees as a Western-dominated international order and to chip away at the liberal norms and institutions that underwrite it. Like the character in Woody Allen’s 1983 film Zelig, Putin and his minions have been showing up in virtually every corner of the globe to contest American influence and its leadership of this order.

In Europe, there is evidence of Russian attempts to influence the 2016 Brexit vote and to promote far-right and fringe candidates with ties to the Kremlin in elections in France, Germany and Italy. Moscow also sought to stoke Catalan separatism prior to the October 2017 independence referendum and backed a coup in Montenegro to prevent it from joining NATO. The Kremlin has littered the path of integrating Balkan countries into the West with numerous obstacles. Bosnia’s security minister recently warned that Russian-trained mercenaries have established a paramilitary unit to support Milorad Dodik, the country’s ethnic Serbian separatist leader.

In the Middle East and Africa, Moscow is now in the driver’s seat in trying to navigate a peaceful transition of power to a post–Assad political order. Russia recently signed a major arms deal with NATO ally Turkey and is collaborating with Ankara to prevent further Kurdish expansionism in Syria; concluded an agreement with Egypt that would allow Russian aircraft to operate out of Egyptian bases; and increased its support for a Libyan warlord who now controls half the country. In South Africa, Russia is knee-deep in the corruption scandals that have rocked the Zuma government.

Closer to home, Russia hopes to reassert its former trade ties with Cuba and resume military and intelligence operations on the island. U.S. National Security Adviser H.R. McMaster recently warned of Russian meddling in Mexico’s upcoming presidential election to swing it in favor of a populist candidate who campaigns on anti-American themes. Canadian officials have warned of Russian influence operations in the country. The Kremlin is using loans to prop up the authoritarian Maduro regime in Venezuela, gobbling up much of the country’s oil and gas assets at bargain-basement prices.

What Does Russia Want?

Many of these seemingly disparate activities reflect Russia’s quest for a multi-polar world. This organizing principle of Russian foreign policy was first articulated in the mid-1990s by Russian foreign minister Yvegeny Primakov. It has been echoed in every major foreign-policy speech Sergei Lavrov has made since 1994, first as Russia’s ambassador at the UN and for the last fourteen years as Russia’s foreign minister. Putin punctuated this theme in his lament in 2005 that “the breakup of the USSR was the greatest geopolitical tragedy of the 20th century” and at his speech at the 2007 Munich security conference, when he railed against “the United States’ monopolistic dominance in global relations.”

Over the past decade, Putin has harped about the “lawlessness of American exceptionalism” and its poor stewardship of the liberal based international order. Exhibits A-F, in his brief, are the Bush administration’s 2003 U.S. invasion of Iraq and mismanagement of the domestic economy; the Obama’s administration’s decision to topple the Qaddafi regime in 2011 and then to walk away from the debris it left behind; Obama’s efforts to support the overthrow of the Assad regime; U.S. promotion of democracy and “color revolutions” across the former Soviet Union; and a decade of failed policy in Afghanistan. In Putin’s mind, many of these actions helped spawn the current state of global disorder, the rise of Islamic extremism, and the turmoil that has engulfed the Middle East.

Thus, Russia’s global activism is deeply rooted in Putin’s vision of what he wants the world to look like and Russia’s global role and position in this world. Moscow is not doing this, moreover, just because it resents the West’s power and wants to undermine Western democratic, security and economic institutions, although it certainly does. Russia is also going global because of its lackluster economy at home and desire for more business abroad—and because being seen as the U.S. equal on the global stage and standing up to America is good politics.

What Would George Kennan Do?

George Kennan once compared the United States to a giant, slumbering dragon: slow to arouse but once awakened it thrashes about wildly to slay those who have disturbed its tranquility. Now that the Trump administration has recognized Russia as a major national-security priority, it should not go out in search of dragons to destroy, but start by asking the following questions: what U.S. interests are threatened by Russian actions and how likely is it that Russia can achieve its goals; what is the objective Washington hopes to achieve by pushing back on these activities and why do we expect the proposed measures to achieve it; what are the likely cost and consequences of those measures and how might they be managed or mitigated; and what should we do if our measures fail to advance our preferred outcomes.

In answering these questions, it is important to remember that the Kremlin is not operating from some master plan and we are not watching Cold War, the sequel. The Kremlin doesn’t want to run the world. Putin understands the limits on Russian power and the costs and risks of being the big dog on the block; he wants instead to accelerate the transition from the post–Cold War unipolar world led by Washington into one with multiple poles in which Russia has a secure place at the table. The Kremlin offers no viable alternative to the existing order.

Nor has Russia created the problems it is exploiting; rather, it is taking advantage of opportunities to fill voids created by Trump’s “America First” doctrine and U.S. and Western missteps. Indeed, Russian activities are less fire and fury and more for show and for flipping the bird at the United States. Russia will continue to take a back seat to China in the Asia-Pacific region. Russia is not about to dominate Europe, its activities in Africa and in this hemisphere have nuisance value but are not game-changers, and the Kremlin has no interest in fixing a broken, angry and dysfunctional Middle East.

Furthermore, Russia is not immune from overreaching or blowback. The Kremlin has succeeded in trying to limit Ukraine’s Western integration and domestic reform efforts, and it has also exacerbated strains in transatlantic unity. But for the first time in a generation Russian aggression in Ukraine and threats to other European states have triggered a real debate in NATO about improving the alliance’s defenses and some needed increases in allied defense spending. Russia’s aggression against Ukraine has cemented the latter’s Western orientation and driven a stake through the heart of Moscow’s dreams of integrating Ukraine into the Eurasian Economic Union (EEU), the centerpiece of Putin’s goal of creating Russian-led counterweight to the EU.

Although Russia’s intervention in the 2016 U.S. presidential election fueled political dysfunction, it also created a political firestorm that has weakened Trump’s ability to reset relations with Moscow, strengthened rather than removed sanctions against Russia, and helped firm up European resilience to and awareness of Moscow’s tactics and growing political and economic footprint in several EU or NATO countries. Moscow’s backing of far-right French presidential candidate Marine Le Pen similarly backfired. It not only highlighted Russia’s attempts to intervene in French politics, but enhanced European public awareness of Moscow’s influence efforts and shored up European resilience to Russian meddling. Previous Russian efforts to show global or regional leadership—through BRICS, the CSTO and the EEU—have all floundered.