On the Fritz: Rethinking Frederick the Great 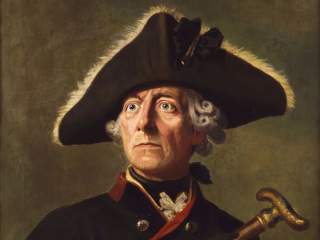 NAPOLEON SWIFTLY conquered Prussia in October 1806, inflicting crushing defeats at Jena and Auerstedt that humbled a realm long known for its military tradition. A bulletin announcing news of the two battles described them as expunging the fifty-year stain left by Frederick the Great’s victory over a French army at Rossbach in 1757. When he visited Frederick the Great’s tomb with a group of his generals, Napoleon purportedly instructed them, “hats off gentlemen, if he were alive we wouldn’t be here today.”

The story captures the power Frederick’s reputation held. Nathanael Greene, George Washington’s most successful subordinate during the American Revolution, considered Frederick “the greatest general of the age.” Washington himself placed a bust of Frederick at Mount Vernon alongside Julius Caesar and Alexander the Great. British officers also took his campaigns in the Seven Years’ War as an authoritative guide to the military art. Frederick’s use of rapid maneuver to concentrate force anticipated Napoleonic warfare. His victories made Prussia a great power and ensured Frederick’s later emergence as an icon of German nationalism.

Tim Blanning’s outstanding biography, Frederick the Great: King of Prussia, offers a new perspective on a familiar story. Joining appreciation of eighteenth-century culture with insight on war and diplomacy, Blanning emphasizes the contingencies that shaped Frederick’s life. Like the realm he so carefully developed, Frederick himself was a product of his own effort and imagination. Determined to spite his brutal, militaristic father by surpassing him in the sphere the old king valued most, Frederick embarked on policies that upended the balance of power. The soldier, aesthete and enlightened monarch was, at heart, Blanning shows, a gambler playing for the highest stakes. A taste for risk set Frederick’s course from the start.

Having acquired the Electorate of Brandenburg in 1415, the Hohenzollern family later gained Prussia and other territories across North Germany. Their realm lacked geographic cohesion or defensible frontiers. Even at Frederick’s accession, other states divided provinces in western Germany from the core region of Brandenburg-Prussia. Vulnerability made the Thirty Years’ War (1618–48), when the electorate lost between 40 and 50 percent of its population, a near-death experience. Preferring to be predator rather than prey, the “great elector” Frederick William built a standing army that reached thirty-one thousand by his death in 1688 and a tax system to finance it. His son Frederick became “King in Prussia” in 1701. King “in” rather than “of” Prussia because West Prussia remained under Polish suzerainty, but Prussia rather than Brandenburg since its position outside the Holy Roman Empire made it unquestionably a sovereign possession. Small details mattered.

Institutions compensated for Prussia’s weakness by enabling its rulers to exploit what they had while striving for more. The Hohenzollerns carefully managed their own domains to draw income while extending crown influence through leaseholders who sublet the royal properties they oversaw. Military service made nobles crown servants, not members of an independent elite whose privilege rested on landed wealth. Cadet schools provided a good education and a path into an army career often followed by civilian administrative offices. Blanning argues that it made Prussia’s landed class “partners in autocracy” with their kings. The partnership gave Prussia the most effective local government in Europe and kept nobles from resisting or rivaling their king.

Whereas most countries had an army, in Prussia the army had a country. The quip reflected a recruiting system based on cantons that made it possible to conscript a large portion of eligible men and then release them back to civilian life after training and brief active service. Ferocious discipline, constant drill and innovations in weapons and tactics made Prussian troops highly effective. The cantonal system also provided a trained reserve to expand the army and replace losses. Its lists included a quarter of the population, enabling the army to recruit two-thirds of its soldiers domestically. Prussia’s eighty-thousand-man army in 1740, Blanning notes, outstripped that of Spain, the Dutch Republic and Sweden and placed it in the top rank of European military powers.

For all its advantages, Prussia was hardly the force it later became. Saxony was the most advanced and prosperous German principality, enjoying greater prestige than its neighbor. Bavaria and other states also carried significant weight. The balance among the German states mattered as much or more for Prussia than the wider European system. Knowledge that Prussia eventually triumphed, Blanning quite rightly insists, “should not obscure the contemporary possibility of quite a different outcome.” Prussia’s strengths stand out more in retrospect.

FREDERICK AND his father represented an especially ill-matched pair even by eighteenth-century Europe’s standards of spectacular generational conflicts. King Frederick William built an army he chose not to use despite his passion for all things military. Constant physical suffering caused by porphyria, the disease that afflicted Britain’s George III, shaped the way he forced his sensitive, aesthetically inclined heir into the same mold. An upbringing that amounted to sustained abuse transformed Frederick into a soldier without tempering his other enthusiasms or inculcating the devout Protestantism his father espoused. Blanning deftly captures the psychological trauma inflicted by episodes that included watching his best friend’s execution for aiding an attempt to escape his father’s court. Frederick only survived by melding outward obedience to his father with internal resistance by a self-fashioning that only flourished after he gained the throne in 1740.

As Blanning cleverly observes, “if the old block is hit hard enough, the chip is liable to spin off in unpredictable directions.” Beside the material legacy of a powerful army, efficient government and a treasury that could finance war without borrowing or new taxes, Frederick William left his son “a psychological burden of corresponding magnitude.” Frederick responded by attempting to surpass his father “in the royal métiers that mattered most—war and conquest.” Foreign observers expected Frederick to begin with a spectacular stroke, even at the risk of receiving one himself. Frederick saw his chance when the Habsburg Emperor Charles VI left his realm to a daughter, Maria Theresa, who lacked the military or financial means to protect it. European history’s “most famous smash-and-grab raid” followed in December as Frederick’s army captured the rich Habsburg province of Silesia.

Frederick had gambled that Austria would cut a deal accepting the loss of a province it could neither defend nor recover. Maria Theresa and her ministers determined instead to drive him out. Frederick’s victory at Mollwitz in 1741 proved costly, largely from his own inexperience, but it decided Silesia’s fate. The battle also unleashed the War of Austrian Succession. France joined the struggle against its Habsburg rival to partition Maria Theresa’s inheritance and form a balance in Germany that favored its interests. Blanning aptly describes it as “Napoleon’s plan for Central Europe sixty years early.” Not surprisingly, Maria Theresa blamed Frederick and thirsted for revenge. In his essay “Frederic the Great,” Macaulay wrote,

To recover Silesia, to humble the dynasty of Hohenzollern to the dust, was the great object of her life. . . . Nothing would content her but that the whole civilised world, from the White Sea to the Adriatic, from the Bay of Biscay to the pastures of the wild horses of the Tanais, should be combined in arms against one petty state.

The war raises questions over Frederick’s ability as a general. How effectively did he use the tools he inherited? Along with the ability to learn from setbacks and remedy shortcomings exposed in battle, Frederick showed “a capacity for taking decisions and an iron resolution in seeing them through.” Audacity and a thirst for decisive victory made him reckless, a pattern that continued throughout his career. Unity of command that joined civilian and military authority in his hands gave Frederick advantages his adversaries lacked. It also made him the pivotal decider and amplified the consequence of his mistakes. Especially when he ignored advice from subordinates, errors made successes more costly than necessary. When gambles worked, as they often did, Frederick gained more credit than he deserved. His brother Henry remarked angrily on the king’s tendency to ignore vital contributions by more able subordinates. The myth of Frederick’s genius obscured the more complex reality that Blanning draws into focus.

Renewed fighting in 1744 tested Frederick’s resolve. He struck first before a Habsburg-led bloc of German princes, joined by Britain and Sardinia, could act. Things went badly wrong after early gains. Frederick admitted in his memoirs that no general committed more faults than he did over the ensuing campaign. The Austrians avoided battle, denying Frederick the chance for the decisive engagement he needed as supplies dwindled and winter approached. France quit the fight as Frederick’s ally. Bavaria sought peace with Vienna. Frederick reorganized his own forces, determining “either to maintain my position of power or to see everything perish and be buried with me right down to the very name of Prussia.” A hard-fought victory at Schweidnitz in June 1745 saw him regain the initiative. Frederick later escaped disaster at Soor, where the Austrians nearly caught him off guard. Defeating Saxony and occupying its capital at Dresden forced Maria Theresa to accept that she could not solve the problem Frederick presented through war. Survival while retaining Silesia amounted to victory for Frederick, who had won Prussia a place in European politics.