The Future of China's Nuclear Missile Submarines: How Worried Should America Be? 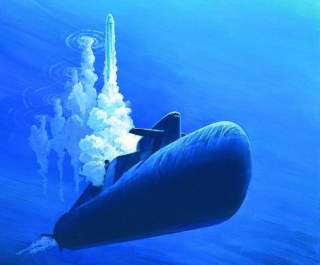 One of the challenges of analyzing Chinese defense and foreign policy for Western strategists is that China often behaves quite differently than conventional paradigms for strategy development would otherwise predict. For example, Beijing’s focus on sea power development has been parsed in rather excruciating detail for well over a decade, but Beijing still wields just one (almost) operational, conventional aircraft carrier and a single overseas “support point” in Djibouti. That location, adjacent to the bases of several Western powers including the United States, hardly suggests aggressive intentions.

But nowhere is China’s unique approach to military strategy as evident as in the nuclear strategy realm. It is true that Beijing’s initial restraint in creating its “minimal deterrent” during the 1960s and 1970s no doubt reflected severe resource constraints. However, there can be little doubt that if China sought a massive nuclear arsenal (on par with the United States and Russia), it could have it by now. Instead, as I have noted in this column previously, it has wisely invested in domestic transport infrastructure, such as its colossal high-speed rail network. Still, it is true that the PLA Second Artillery is now bringing online a series of new systems that will reinforce “assured destruction.” Of particular interest, is the continued development of the submarine-leg of the Chinese nuclear triad. This edition of Dragon Eye will discuss a rather detailed analysis of China’s evolving sea-based nuclear weapons written by the reasonably well-known Chinese nuclear strategist, Professor Wu Riqiang (吴日强) of Renmin University, in the naval magazine Modern Ships (现代舰船) published by the shipbuilding conglomerate CSIC in early 2016 (issue 01B).

The analysis begins with the dramatic reference to an apparent November 2015 article from People’s Navy (人民海军) that had published the official announcement from the Central Military Commission that a certain “South Sea Fleet submarine base boat 41 crew” (南海舰队某潜艇基地41艇员) is given operational status. It suggests that the same reference offered that in April 2015 the South Sea Fleet had been ordered to undertake a “long-range patrol as part of realistic combat [training]” (实战化远航任务). These rather striking pronouncements are followed by a startlingly candid admission (at least in the Chinese context).  “… [I]t is generally believed that Chinese strategic nuclear missile submarines have never undertaken a strategic patrol.” Given that the PLA Navy first fired a submarine launched ballistic missile (SLBM) from a strategic submarine almost three decades prior, that admission may actually cast a kind of a pall over this program.

In a similarly forthright manner, Professor Wu outlines how he sees the current U.S. threat to China’s sea-based nuclear forces: “If American SSNs are lurking off of Chinese submarine bases, then they may follow Chinese submarines as they egress from those ports. If a war erupts and they receive the order, [the U.S. submarines] can sink the [Chinese submarines]. That’s the standard American tactic.” He links the development of Beijing’s SSBN force together with Washington’s development of antiballistic missile (ABM) defenses. Professor Wu observes that Soviet strategic submarines from an early point limited their patrols in the southern hemisphere, such that U.S. missile defenses have always been oriented toward the northern flank. There is no mention of North Korea here, interestingly, but he advises that “If Chinese strategic submarine can get out to the big ocean and launch their missiles from the South Pacific, they could give U.S. missile defenses no small amount of trouble.” (… 在南太平洋发射导弹, 就可以给美国反导系统造成不小的麻烦). He notes with concern that the next phase of the BMD missile SM-3 block 2A, which Washington is presently working on with Tokyo, could pose a challenge to the penetration ability of Chinese submarine-fired missiles.

One of the most fascinating parts of this analysis consists of a discussion of whether China should pursue a more Russian-style approach or alternatively, a more American approach to developing the SSBN program. The so-called “bastion” (堡垒) model employed by the USSR during the late Cold War, according to Professor Wu, has the advantage of bringing many different types of platforms (e.g. aircraft) in to supplement the protection of the strategic submarines. Yet he observes that the other side of this coin is that the Soviet approach require the use of a wide array of military forces that obviously are taken away from other missions. He describes the American approach as “deploying autonomously” (单独部署), but notes that the U.S. Navy model for SSBN operations depends on a high degree of stealth resulting from superior acoustic performance.

Probing the possibilities for a Soviet-style bastion off China’s coasts, the analysis observes that the Bohai is too shallow, that the Yellow and East seas, while favorable to submarine stealth, are easily penetrated by forces of the adversary. Assessing the South China Sea, he says its depth is appropriate, but that sound propagation characteristics are not favorable to submarine stealth and “survivability” (生存) and that the sea area “cannot be sealed off” (不封闭). “Of course,” Professor Wu says, “concrete [details] regarding nuclear submarine deployment areas are a nation’s top secret information,” but he emphasizes again that the People’s Navy (人民海军) announcement (mentioned in this article’s introduction) did specifically cite that it was the South Sea Fleet and it was a “long distance patrol.”

Looking at some other models of SSBN deployment, Professor Wu also briefly discusses the ongoing debate in the United Kingdom about whether to maintain a “continuous undersea patrol” (持续水下巡逻), noting that opponents there argue the “cost is too high.”  He then cites an American intelligence report revealing that four Type 094 SSBNs have been built already and a fifth is apparently in build, suggesting that China will certainly have the ability to maintain continuous patrols. Pointing out the command and control difficulty that the evolving SSBN capability presents for Beijing, he contends that specialized aircraft are most likely being developed (similar to the American TACAMO E-6).

For the time being, Professor Wu expresses confidence in China’s land-based nuclear missile force, when he says: “Locating land-based mobile missiles is really not easy …” (定位大陆机动导弹并不容易) He concludes the discussion by observing China’s “current impatience” (目前心急) to field an effective SSBN force, but suggests that significant improvements are still needed. For example, he underlines the imperative to develop the JL-3 SLBM with 12,000 km range that can “strike U.S. territory from China’s coastal waters and will [thus] vastly increase the flexibility of [Chinese] nuclear submarine deployments.”

However, the paper does come to one rather unexpected conclusion, in the end. Professor Wu states that “The requirement in the current period for Chinese nuclear attack submarines [SSNs] far exceeds its needs for strategic missile submarines [SSBNs]...” He does not really explain this point, but one can imagine that a new generation of quieter Chinese nuclear attack submarines could have a major impact on the naval balance in the western Pacific. Besides the obvious mission set, such boats could even break into the eastern Pacific to attack U.S. shipping off the West Coast, lay mines, or even launch land-attack cruise missiles against U.S. territory. But Wu’s central reasoning seems to be that a quiet and effective SSN force is a prerequisite to building a quiet and effective SSBN force. For him “nuclear submarine experience” (核潜艇经验) is most important, and this will not happen for China overnight.

This article reveals a number of different trajectories for China’s undersea deterrent and the PLA Navy generally. While China’s naval buildup is quite rapid, one can also see clear elements of moderation, step-by-step building, and even restraint. Far-sighted and clear-eyed U.S. national security leaders must realize that similar restraint by Washington (with a bit of diplomatic creativity and flexibility for good measure) will go furthest to encourage Beijing to keep its darkest, most competitive inclinations under control.