Is This the Future of Russia's Anti-Submarine Weapons? 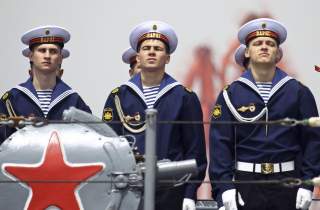 It seems that a feature of the “New Cold War” will be the real possibility of great-power military conflict at almost any moment—whether by accident, misperception or deliberate provocation. As the number of “fronts” in the dangerous U.S.-Russia rivalry multiplies from Ukraine to cyberspace to Syria and beyond, the chances of an incident or spark will also multiply. While many Western media outlets seemed inclined to dismiss President Vladimir Putin’s March 1 speech as grandstanding or even bluffing for political effect, this author does not hold that view.

All American strategists should listen carefully to the entire speech (and not just excerpts), which is now available in full translation. Indeed, most Western appraisals of the speech seemed to miss the fact that Putin claimed that the Dagger (Kinzhal) air-launched hypersonic, maneuverable missile-strike system was said to already be “fully operational” with Russian forces in the Southern Military District. Naval strategists viewing the speech might also have noticed that the graphic accompanying the statement and played for the audience (an hour and thirty-eight minutes into the two-hour speech) showed that particular weapon striking a surface ship—an unfortunately rather realistic target for an initial Russian warning strike within a Ukrainian or even a Syrian scenario. This new capability, seemingly the first of its type to enter any nation’s arsenal, once again alarmingly points to the stark vulnerability of surface combatants to ever-improving antiship missiles.

Fortunately, Russian strategists appear to have a healthy respect for the U.S. Navy’s submarine force. Thus, a recent Russian appraisal of the U.S. Navy’s ICEX deployment of a couple of submarines to the Arctic cautioned Russian colleagues not to underestimate the prowess of U.S. submariners in the complex maneuvers associated with under-ice operations. In examining the emerging Chinese strategic challenge, this analyst has always considered the undersea balance as of paramount importance, so this edition of Bear Cave will focus on a new Russian antisubmarine-warfare capability that is not a game changer, but that could have some significance nevertheless.

An April 6 article appeared in the Russian newspaper Izvestiya under the headline, “The Antisubmarine System Has Been Hidden in a Regular Container: the Navy is Testing a Compact Hydro-acoustic Station [Систему обнаружения субмарин спрятали в обычный контейнер: ВМФ испытывает компактную гидроакустическую станцию].” The article explains that the system can be fitted on almost any type of warship or civilian vessel. The capability will allow Russia “in extreme necessity to rapidly expand antisubmarine forces [позволит при необходимости быстро нарастить противолодочные силы].”

For now, the system is apparently primarily intended to be fitted aboard a new class of Russian corvettes, the Type 22160. Six of these well-armed, small combatants have been laid down, with one now completed and in sea-trials. The ship is reflective of the Kremlin’s new determination to economize resources and pursue smaller naval platforms that still, however, pack a punch. Coming in at about two thousand tons, this class is “intended for patrol of the coastal zones [предназначенные для патрулирования прибрежной зоны].” Yet another trend revealed in this warship is toward developing combat systems as “modules” that can be deployed aboard ship or not, according to the mission. In this design philosophy, the ship then is likely a cousin of the troubled Littoral Combat Ship (LCS) being built for the U.S. Navy.

Concerning this “module,” it is unique in that it has apparently been designed to fit into “the dimensions of a conventional shipping container [с габаритами обычного морского грузового контейнера].” The system apparently works with use of a “trawl-antenna with hydrophones [трал-антенна с гидрофонами].” A computer control post collects all the data and creates an operational picture of the underwater situation. The operational parameters of this system are said to be classified, but the article explains that a predecessor of this system could detect submarines at a range of fifteen kilometers.

Still, what is perhaps most interesting here is the nature of this system that is intended to be “hidden” among containers, and is, according to this article, one of a series of “‘container’ weapons [контейнерные системы вооружения].” Why that would be advantageous exactly is not fully explained, except that the author suggests that “there is a question of collecting data on the undersea situation in all the world’s oceans [речь идет о скрытном сборе информации о подводной обстановке в различных районах Мирового океана].” However, the main objective of the simple system that fits easily on civilian and military ships of large and small proportion alike appears to be closer to home for Russia’s admirals.

The article notes that the main threat in a large-scale war would be the adversary’s nuclear attack submarines. To confront this threat, “a large number of ASW ships offers the possibility to drive the enemy away from the near shore areas [наличие большого количества противолодочных кораблей дает возможность вытеснить врага из ближней морской зоны].” As one might expect from Moscow’s military doctrine, which obsesses over nuclear deterrence, the ultimate goal is made explicit in the article’s last sentence: the protection of Russia’s nuclear weapons in the SSBN or “boomer” strategic submarine fleet.

At some level, the implications of these developments for the U.S. Navy seem obvious, and are not altogether negative. If Russian priorities are on the protection of the near-shore area with small surface platforms or the deployment of modular capabilities onto other vessels, that may suggest that the Russian Navy is less focused on expeditionary operations or on cutting NATO supply lines. U.S. submarines operating near Russian shores will need to take due precautions, of course, but the system outlined above certainly seems to suggest a defensive orientation for the Russian Navy—and that is not a bad thing. Yet perhaps the most worrisome implications about Russia’s containerized ASW system (along with other containerized naval weaponry) is the possibility that it could be sold to various “bad actors” or countries looking to rapidly counter a perceived threat to U.S. undersea supremacy. Yet another reason, so it seems, to avoid a hostile relationship with Moscow is to encourage Russia not to proliferate such systems that could destabilize maritime security, from the Persian Gulf to Northeast Asia and beyond.

Lyle J. Goldstein is Research Professor in the China Maritime Studies Institute (CMSI) at the United States Naval War College in Newport, RI. In addition to Chinese, he also speaks Russian and he is also an affiliate of the new Russia Maritime Studies Institute (RMSI) at Naval War College.  You can reach him at [email protected]. The opinions in his columns are entirely his own and do not reflect the official assessments of the U.S. Navy or any other agency of the U.S. government.

Image: Russian sailors stand at attention on board a vessel during their departure to return to Russia at a port in Qingdao, Shandong province, April 27, 2012. The Chinese and Russian navies announced on Friday the conclusion of a six-day joint naval exercise. A total of 16 surface ships, two submarines from the Chinese navy and seven Russian ships, led by the flagship Russian cruiser Varyag, participated in the war games. The six-day maneuvers focused on joint maritime air defense and the defense of marine traffic arteries, with exercises involving joint escorts, marine search and rescue operations, anti-submarine tactics and anti-hijacking tactics, Xinhua News Agency reported. REUTERS/China Daily​