The Genius of Metternich: Austria’s Resurrection Through "Active Neutrality" 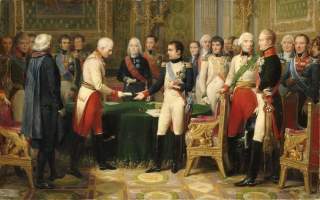 By navigating between great powers during the Napoleonic war, Austria not only survived, but thrived.

In a recent piece for Carnegie Europe, the Dutch journalist, Caroline de Gruyter, dismissively titled her essay “Austrian Acrobatics in Europe” outlining what she describes as the “ultrapragmatist” (or reckless opportunistic) foreign policy of the country structured around the seemingly arcane concept of neutrality. Going beyond Austria’s narrow example, neutrality has received low marks from scholars and commentators throughout history. And while there may be some validity in pursuing such a policy in peacetime, starting with Thucydides’ portrayal of the Melians’ plight and Machiavelli’s critique of the concept in The Prince, neutrality has been particularly dismissed as an unwise course of action in times of war (cf. the fate of Belgium during the World Wars).

However, in 1813, Austria’s “active neutrality” doctrine—largely a combination of diplomatic duplicity and genuine indecision—saved the Austrian Empire in the most severe crisis in its history. By applying the active-neutrality doctrine, the empire was able to delay its entry into the last coalition against Napoleon, and as a consequence, exerted—disproportionate to its actual power—influence over the other members of the alliance and decisively contributed to Napoleon Bonaparte’s defeat. As a result, Austria was also able to exercise undue sway over the postwar settlement, colloquially known as the “Congress of Vienna,” which in turn guaranteed the survival of the archaic multinational Habsburg Empire for another one hundred years. With the 200th anniversary of the Congress of Vienna just around the corner, the story of Austria’s accession to the last coalition against Napoleon is worth retelling.

An Encounter at Night

It is October 23, 1813. Fatigued from a day of hard riding, the Austrian Lieutenant-General, Hieronymus von Colloredo, dismounts his horse. For days, his Austrian corps had been pursuing the fleeing French forces, which were in full-scale retreat heading westwards back to France via Weimar after Napoleon’s defeat at the battle of Leipzig. Colloredo steps into a house on Frauenplan that his vanguard had requisitioned for him in Weimar. The landlord, an older German gentleman, stands in the doorway to welcome the victorious allied commander. As soon as Colloredo spots the medal that the host was negligently wearing on his chest he abrasively bellows: “Faugh! How to hell can one wear such a thing?” Johann Wolfgang Goethe had committed a faux-pas (plus ultra) by wearing the French Legion of Honor order bestowed upon him by Napoleon Bonaparte.

Wilhelm von Humboldt, a houseguest of Goethe at the same time as Colloredo, related this story in a letter to his wife on October 26, 1813—coincidentally the same day that 142 years later, the small Federal Republic of Austria would adopt a paragraph pledging “perpetual neutrality” in its new postwar constitution. This was indeed an irony of history: Without Austria’s persistent policy of neutrality in the year 1813, Goethe—who himself tried to remain neutral (critics called it spineless opportunism) during the Napoleonic Wars, which had engulfed Europe since the beginning of the French Revolution—might have never had the “pleasure’”of Austrian company on that evening in Weimar. For without this carefully calibrated as well as deceitful policy of active neutrality, Austria by 1813 might have very well been wiped off the political map of Europe.

Austria’s Political and Military Situation in 1813

By 1813, the Empire of Austria was at the low point of its political existence. Twenty years of constant warfare, countless lost campaigns, the loss of huge chunks of territory, including the Illyrian Provinces (in modern-day Croatia and Slovenia) and its access to the sea, an enormous national debt (the country had to declare national bankruptcy in 1811), as well as a downgraded and defeated army of merely 150,000 men, had turned the empire into a second-rate power. Politically, Austria had no room for independent actions: Austrian Emperor Franz I had allied his country to his arch-nemesis by marrying his daughter Marie Luise to the Emperor of the French. This made Austria a de facto French satellite state.

In 1812, Austria even had to supply a contingent of 30,000 troops to support Napoleon’s invasion of Russia. A small gesture, but even this mostly symbolic contribution nearly bankrupted the crumbling Central European power. However, it was during the Russian campaign that it finally dawned on the Austrian court that the empire rather sooner than later might receive its coup de grâce and be divided up between the great powers of France and Russia. After the French defeat, Austria knew it had to formulate a carefully calibrated foreign policy without upsetting either of the two great warring powers. According to the historian Albert Sorel, Austria had two things to fear: “First, a victory of France, second, a victory by France’s enemies.” Yet, what to do as a weak vassal-state trapped in an international system that inclines towards the expunction of your existence?

Appointed in 1809, Austria’s incumbent foreign minister, Klemens von Metternich, was fully aware of the precarious situation that the monarchy was in. For the past twenty years, the empire had repeatedly fielded the most soldiers against France, and repeatedly was badly beaten and abandoned by its allies, the English, the Russians and the Prussians. Metternich knew that Austria had barely enough resources for one last fight, and that this time he had to guarantee that Austria was on the winning side.

Some of the groundwork for Austria’s policy of active neutrality was already laid out in 1812, when Metternich assured the Russian Czar that Austrian troops participating in the invasion of Russia would only operate in the Bukowina (now a region divided up between Ukraine and Romania), ancillary to the main French forces. He pressed the Russian court to maintain secret diplomatic ties, despite the state of war between Austria and Russia. As a consequence, Austria did not withdraw its ambassador from St. Petersburg, and the Russian ambassador, after the declaration of war, merely relocated from Vienna to Graz.

Friedrich von Gentz, confidential advisor to Metternich, called this type of diplomacy “active neutrality” and, by coining the term, initiated the conceptual framework for Austria’s future actions. The first objective of this policy was the cessation of hostilities between St. Petersburg and Vienna. The second objective was the dissolution of the Austro-French alliance. The last objective, and also the most difficult, was to keep Austria out of the war as long as possible due to its internal weaknesses.

The fortunes of war favored Metternich in accomplishing the first objective in early 1813. Once he got wind of the destruction of Napoleon’s expeditionary force, he immediately offered himself as an intermediary between France and Russia. Napoleon consented: “I will do what the Emperor of Austria wants from me. He is my father, my ally, our alliance is for eternity,” stated Bonaparte melodramatically in a letter in January 1813.

Metternich consciously played a game of duplicity and plausible deniability. None of his diplomatic moves could be unequivocally discerned. As an ostensible French ally, Austria had the duty to fight Russia. Yet, even Napoleon had to consent to the logic that should Metternich be an intermediary between the two warring factions, Austria could not be in a state of war with either parties. In addition, a ceasefire was in Napoleon’s interest: He quickly needed to build a new army after his defeat in Russia and for that he needed time.

The Austrian corps, commanded by the Prince of Schwarzenberg, had survived the Russian campaign largely intact. Despite orders to cover the French retreat, Austria, under the cloak of being Napoleon’s plenipotentiary and chief negotiator, was now able to approach Russia directly and secretly negotiate a ceasefire between Austrian and Russian forces. The result was that Austria withdrew its corps from Warsaw to the city of Cracow, exposing Napoleon’s most trusted ally, the Grand Duchy of Warsaw, to the Russians. Yet, despite calling this move an “evil plot,” Napoleon suppressed any reprisal. He had no troops to spare to punish Emperor Franz I—at least, not yet.

In February 1813, Prussia—an erstwhile French ally—entered into an alliance with Russia against Napoleon. Both sides agreed to “only negotiate peace or a ceasefire conjointly” as stated in the so-called Kalisch Declaration. Soon Sweden and England joined this new alliance, and Article 7 of the declaration officially invited Austria to accede, as well. Yet although Metternich was secretly the one who advised Prussia to enter an alliance with Russia, the offer remained unacknowledged by the Austrian court. Metternich spent a few weeks in March 1813 sick in bed and vexed by the aloofness of his monarch. Emperor Franz I was indeed indecisive about the best course of action. His personal sense of honor prohibited an official break of the alliance with France. At that moment, active neutrality was the diplomatic limit of Austria under Franz I.

Austria was still the chief intermediary in what was still only a Franco-Russian-Prussian War, and Metternich dispatched Austrian emissaries to both the Allied and French camps to convince both sides of Austria’s good intentions. On the one hand, he wanted to reassure Napoleon of Austria’s loyalty, while on the other hand he promised both Russia and Prussia that if bilateral negotiations with France broke down, the empire would “cooperate in the biggest possible accordance with the allied powers.”