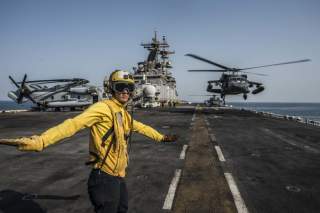 Word has it the Pentagon will soon release a directive outlining its “Joint Concept for Access and Maneuver in the Global Commons” (JAM-GC). JAM-GC is the Joint Staff’s manifesto for managing the “anti-access/area-denial” (A2/AD) problem, principally in waters that wash against the Eurasian rimlands. Anti-access is how the Chinas, Irans, or Russias of the world deploy sea- and shore-based weaponry to make things tough on foes cruising their near seas or skies. Make things tough enough and an opponent might keep clear.

Access denial is an acute problem for U.S. and allied forces operating within reach of land-based airfields or anti-ship missile batteries, to say nothing of missile-toting submarines, patrol craft, or surface combatants. That is to say, A2/AD constitutes a problem all along the East and South Asian periphery. Not just naval fleets but armies and air forces can pummel enemy forces already in the theater, such as the Japan-based U.S. Seventh Fleet or the Bahrain-based Fifth Fleet. That’s area-denial.

Or, regional hegemons can drive up the costs of entering contested zones to forbidding heights for Washington. That’s access denial. If a thicket of A2/AD defenses proves too dense to pierce, that is, American statesmen and commanders may balk. They could pause, or desist from the attempt altogether—and, in effect, abandon a crucial combat theater. If so, they will forfeit important interests such as Taiwan’s defense, commitments to Persian Gulf allies, or freedom of the sea in Southeast Asia. Local defenders will have triumphed without the clangor of combat—attaining the supreme excellence in strategy.

America has no strategic position in Eurasia absent access to marginal seas like the Western Pacific or Arabian Sea. JAM-GC—and whether the armed forces can put this operational design into effect—thus matters more than your run-of-the-mill bureaucratic document.

Puncturing a local opponent’s forward defenses is far from a novel problem, even though the A2/AD lingo is new. Since antiquity, warriors have harried opponents making their way to the battlefield. Why not bias the outcome in your favor? And if the parlance for describing the access problem is new, so is the parlance for debating would-be solutions. As Joint Staff director David Goldfein put it last January—with tongue lodged firmly in cheek, one presumes—JAM-GC is the concept “formerly known as Air-Sea Battle.”

It’s the same thing, that is, but it bears a mealy-mouthed title that engenders little scrutiny or debate. Which—though it’s doubtful anyone would admit it—was one big reason for changing the name. Sure, forcible-entry operations need to be compatible with directives like the Joint Staff’s Capstone Concept for Joint Operations. The U.S. Army needs to be brought into counter-counterintervention contingencies. Forcible-entry methods need periodic updating as the operational surroundings change. These are all motives cited for issuing a new directive, and there’s no gainsaying them.

But service potentates could’ve refreshed AirSea Battle without playing the name game. It’s been done before. Getting the topic out of the daily headlines, consequently, must have impelled the decision to essay a makeover. Why? Because AirSea Battle excited feverish commentary during its short, troubled life. Just look at the title: AirSea Battle sounds warlike and vaguely sinister. JAM-GC, though, sounds like an obscure rap group. It would attract scant notice even if its substance were identical to AirSea Battle.

And indeed, the furor surrounding forcible entry subsided following last January’s linguistic switcheroo. Mission accomplished! So much for the retrospective on the Pentagon’s PR stratagems. What should JAM-GC say? Let’s take a back-to-basics approach:

Replace AirSea Battle with something—or nothing:

Official documents about strategy, doctrine, or war planning do more than elucidate how to harness martial means for strategic and political gain. They’re a venture in storytelling vis-à-vis important audiences. A well-executed document, in other words, defines worthwhile purposes and explains convincingly how Washington will deploy power to fulfill them. It makes believers out of domestic constituents, allies and friends overseas, and likely antagonists.

Pentagon spokesmen mishandled AirSea Battle, by contrast. They remained closemouthed about the concept—compelling outsiders to infer the content of AirSea Battle from think-tank reports and fellow commentators. Starting in February 2010, for instance, the Washington-based Center for Strategic and Budgetary Assessments (CSBA) published a brace of studies setting forth a vision of an AirSea Battle doctrine. It took the Pentagon until mid-2013—three full years—to publish an official, rather nondescript statement of its own.

During that three-year interval, analysts—including yours truly—fell back on the CSBA treatises when asked about the doctrine. We had little else to go on. In short, the keepers of AirSea Battle let the narrative get away from them rather than telling their story well. Commentary took on conspiratorial overtones as a result.

The CSBA reports set Washington abuzz for two chief reasons. One, the authors named names. They declared that AirSea Battle was about overcoming China’s anti-access strategy and weaponry. This was too frank and too premature for officialdom, not to mention many observers in the press and academe. Designating a rival great power as a potential enemy, they believed, could make that rival into an actual enemy. Better to keep mum about the prospects for unpleasantness.

And two, the CSBA analysts espoused launching a “blinding campaign” against China’s People’s Liberation Army (PLA) at the outset of war. Disabling PLA intelligence, surveillance, and reconnaissance assets—radars, manned and unmanned patrol aircraft, and so forth—would keep Chinese rocketeers from targeting U.S. aircraft and warships operating offshore. For many observers this was a bug, not a feature, in the AirSea Battle scheme. They fretted that blinding an opponent could represent a prelude to escalation—perhaps even to a nuclear exchange.

Mismanaging the message wasn’t the only trouble with AirSea Battle, though. The concept had an otherworldly feel to it. It was an operational concept in search of an enemy, and ripped out of any geostrategic context. The unclassified 2013 summary rightly observed that AirSea Battle was an operational concept, not a strategy. As such, it prescribed a generic approach to managing or defeating A2/AD challenges. It averted its eyes from specific scenarios, regions, and foes.

The unintended consequences of this approach were two. One, it conveyed the impression that Washington reserved the right to kick in the door to various regions for no apparent reason. That’s what happens when military folk hold forth about deploying military force but decline to explain why. Expecting readers to glean the context surrounding AirSea Battle from the mound of directives that explicate U.S. national security strategy was expecting too much. Documents like AirSea Battle and JAM-GC should contain enough larger context to stand alone.

And two, refusing to designate countries intent on access denial reduced potential foes to potted plants. Nameless adversaries were inert, bereft of ingenuity and competitive fire. Or, more precisely, it reduced them to collections of widgets—to squadrons of planes or ships, inventories of bombs and missiles, and sensors and computers. The U.S. military was planning to battle A2/AD networks, not living, breathing opponents who happen to operate access-denial weaponry. Concentrating on hardware abstracts war from its human context.

As military sage Carl von Clausewitz counsels, war is an intensely human endeavor. It pits societies that inhabit distinct geographic settings against one another in a climate suffused with chance, uncertainty, and strong—usually dark—passions like rage, spite, and avarice. That’s why there is no strategy without an adversary.

Its framers should put JAM-GC in context, showing how commanders will execute it in the China seas, the Persian Gulf, and other potentially embattled expanses. At a bare minimum, they should include language elucidating how JAM-GC fits with governing statements about U.S. policy and strategy. If that makes the document feel repetitious, so be it. Repetition is good. The more JAM-GC represents a standalone document, the better. Let’s situate this operational concept in the real world, showing how it will work against real opponents in real combat theaters.

Explain the nature of the campaign:

JAM-GC will persuade readers if it leads them through a coherent narrative about the A2/AD problem and the remedies the Joint Staff is proffering. The document should use maps. How better to illustrate the dilemmas associated with breaking into, say, the South China Sea? Though a big, semi-enclosed sea, it lies far from American shores; it’s not even especially close to forward U.S. bases in Japan, let alone in the Gulf region. U.S. air and sea forces will converge on Southeast Asia along “exterior lines” while PLA defenders move from side to side along “interior lines” in an effort to head off American advances. And so forth: a map is worth a thousand words. Portray basic facts visually.

China, then, will prosecute a strategically defensive campaign from an interior position while unleashing highly offensive tactics to enfeeble hostile forces. Opportunistic tactics and operations will drive up the costs of entry while shifting the balance in China’s favor. And how will a U.S. campaign unfold within this geospatial setting? In all likelihood U.S. forces will reprise their general approach from World War II. Submarines, that is, will venture into contested waters from day one, making life hell for Chinese merchant and naval traffic. Undersea raiders will fan out in what J. C. Wylie calls “cumulative” fashion, launching disparate, small-scale attacks across the map of maritime Asia.

Meanwhile, heavy U.S. air and sea forces will attempt to batter down A2/AD defenses in a “sequential,” linear offensive, steaming across the Pacific to the relief of allies and friends in the region. As strategist Edward Luttwak notes, sequential campaigns involve an operational decision of enormous moment. For Luttwak, in fact, the critical choice in theater strategy is whether forces should advance along a narrow or a broad front.

A broad-front advance is a typical choice for a strong, risk-averse combatant—think the Allied offensive into Germany after D-Day. Such a forces hammers away all along the enemy’s defense perimeter. A narrow front, by contrast, offers a weaker belligerent high rewards at high risk—think Blitzkrieg. Piercing an enemy frontier at one spot and pouring forces through, that is, could yield a quick victory—but at the risk of leaving hostile defenders assaulting the flanks if the advance falters. Worse yet, the offensive force could find itself surrounded and cut off from succor.

How the military balance stacks up—and how confident U.S. commanders are about their countermeasures to A2/AD—will shape American strategy in Eurasian seas. Will U.S. commanders resolve to take down a defender’s entire A2/AD network, or drive a spearhead into a contested sea and accept that naval task forces must do their work under fire?

The Pentagon shouldn’t divulge everything about its strategy, needless to say. No sane commander gives away his playbook. But the JAM-GC document should say enough to convince key audiences that America has compiled a clear view of the challenges before it and devised a robust, affordable, executable strategy for surmounting them. In so doing U.S. commanders can comfort friends and allies while discomfiting—and, with any luck, deterring—prospective antagonists.

Say something about widgets and tactics:

In a similar vein, JAM-GC’s framers should say enough about hardware and methods to reassure and deter, consistent with not giving the game away. If the military already possesses the implements to wage a victorious forcible-entry campaign, say so. If new weapons remain to be developed and fielded, admit to the deficit candidly and say something about workarounds that will tide warfighters over until the JAM-GC panoply is complete. That’s part of relating a persuasive tale about power and purpose.

The finest operational concept or strategy amounts to a wish—or braggadocio—if tacticians can’t execute it. Prove to Americans, allies and friends, and potential adversaries that the U.S. armed forces boast the ways and means to fulfill grand aims. Do that, and you shall go far.