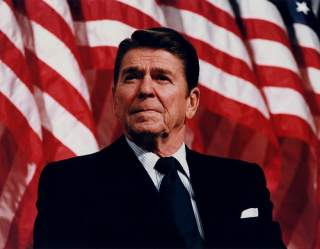 REPUBLICANS OUGHT to be familiar with the concept of temptation. Resisting temptation is a big theme in Christianity, as the Lord’s Prayer reminds us, and the modern GOP has long been the preferred party for the observant Christian. Yet when it comes to the central politico-economic question of our time—the declining wages available to the unskilled or semiskilled worker—many on the right succumb all too easily.

If it seems odd to think of temptation in the context of economic policy, then try and put yourself in the shoes of a Republican politician. You have campaigned on the premise that a vibrant, entrepreneurial private sector lifts all boats. You have argued that lower taxes, less regulation and fewer government services are the elixir that brings growth to life. And yet when you go home for reelection, you are besieged by many voters who feel they have been falling behind in good times and drowning in bad ones.

That politician invariably is tempted to ignore these complaints, to refuse to see what is plainly before his eyes. He is thus tempted to oppose Medicaid expansion, food-stamp caseload growth and other income transfers that replace some part of these people’s declining wages. He is afraid that otherwise he simply would become a modern Rockefeller Republican—a “me too” politician of the sort the modern conservative movement was formed to abolish.

It is tempting, therefore, to imitate Nancy Reagan and “just say no.” But those who do this, however, are following the wrong Reagan. These voters do need help, and they will vote for people who seem to understand their plight and will do something about it. They might not like the heavy hand of government, as their distrust of Obamacare demonstrates, but if the only alternative they are presented with is “just say no,” they will, reluctantly, support the politician who seems to care about people like them.

Instead, conservatives should follow the right Reagan, Nancy’s famous husband Ronnie. They need to begin by acknowledging the reality of economic stagnation for the bottom half of the American workforce. This development is already straining the safety net. But many of those working-class voters are located precisely in the two places a Republican presidential candidate needs to carry to win the White House: the industrial Midwest and the immigrant hotbeds of the Southwest and Florida. Most Republican politicians in these states are either “just saying no” or saying “me too” to government attempts to ameliorate these realities through liberal redistribution, moves that allow liberals to define both the problem and the solution for those affected. A better approach would be for GOP conservatives to recognize the very real difficulties these voters face and seek to devise innovative ways to address them. By doing this, Republicans can do what Ronald Reagan would do if he were alive today in order to address their decades-long empathy gap and recover their historic role as the natural home for the American worker.

INFLATION-ADJUSTED HOUSEHOLD income for most Americans peaked at the end of the Clinton administration. One would certainly expect that income would be lower today after the Great Recession and the modest recovery that has followed it. But even prior to the recession, most families’ incomes remained below their 1999–2000 peak. The least educated Americans—those with only a high-school diploma or less—saw their real incomes decline.

A close examination of Census Bureau data makes this clear. Americans who have either graduated from high school or dropped out of college without a degree comprise roughly half of U.S. households (53.5 million out of 116.1 million). Their real median incomes rose in the 1990s but fell during the Bush boom. Americans in these groups saw their incomes decline even during the growth years of 2003–2007 and plummet even more after the Great Recession.

It’s possible that these statistics are misleading due to Americans’ increasing educational attainment. Each group of eighteen-year-olds is more educated than the last, and this can affect the data above in two ways. First, the oldest Americans are also the least educated. As more of them retire, their incomes will naturally go down. This could drag down the median incomes for those groups, thereby hiding growing incomes for the portion that remains of working age. Second, it’s natural to assume that those young people who “move up” the educational ladder are, on average, less productive than those who match their parents’ education level. This lowers both educational groups’ median incomes: the most productive members of the less educated group leave that group’s statistics, lowering the income for that group, but they are less productive than the average member of the new group, which also lowers that group’s median income.

Looking at median income by age cohort should control for each of these effects. If each age cohort is more educated than the preceding one, its median income should rise, since income tracks educational attainment. It also controls for the aging of America by only comparing like to like: the less educated elderly are only compared with earlier groups of elderly, who were in turn less educated than the current group. Thus, if economic growth were distributed according to America’s historical pattern, the age-cohort approach should show median incomes rose for all age groups between 2003 and 2007.

That, however, was not the case. Median real incomes increased only for people fifty-five or older. Younger Americans did not fare so well. Real incomes for all of the younger age cohorts peaked in 1999 or 2000. Americans younger than thirty-five saw their incomes modestly recover between 2003 and 2007 but remain below their Clinton-era peak, while those between thirty-five and forty-four saw their incomes stagnate. Americans between forty-five and fifty-four, historically the highest-earning Americans, saw their real incomes decline throughout the Bush years.

These data were the worst for these age cohorts of any since the Census Bureau started keeping these records in 1967. During each preceding business cycle, real incomes rose during years of growth and fell during recessions. Incomes in each trough were almost always no lower than in the preceding trough, and incomes at each peak were almost always higher than at the preceding peak. The post-2000 divergence from this pattern strongly suggests that incomes did stagnate or decline.

This stopped in the last decade. The upper income limit for each of the bottom three quintiles reached their peaks in 1999 or 2000 and never regained their pre–Great Recession level. The upper limit of the fourth quintile was up only 1 percent over its 1999 peak, by far the weakest showing in the past fifty years. For the bottom 80 percent of the American income distribution, the first decade of the twenty-first century was truly lost.

The story is even worse today for those at the bottom. While the Great Recession significantly reduced median incomes for all quintiles, it was especially destructive at the bottom. The upper limits for the bottom two quintiles in 2012, the last year for which we have data, are equivalent to those from 1994–1995. If you are a low-skilled, nonimmigrant American, chances are you have not seen a real raise in twenty years.

THIS ECONOMIC fact has serious policy implications for conservatives and Republicans. Declining real incomes and extended bouts of unemployment intersect with the structure of America’s safety net to increase the number of people eligible for existing programs. This also creates greater demand for some government redistribution, resulting in greater popular appeal for extensions of the American welfare state.

Economic stagnation also increases pressure on the existing safety net because many programs condition their eligibility on household income, not on work status. Food stamps, for example, are available to any household with a gross income up to 130 percent of the federal poverty limit. In 2014, that equaled $31,005 for a four-person household, meaning that adults could earn just shy of $15 an hour for full-time, year-round work and still be eligible. Since the poverty limit climbs each year, stagnating wages result in greater eligibility. Families with college-aged children can qualify for Pell Grants or Supplemental Education Opportunity Grants with incomes well into the lower ranges of the middle class. Federally financed health-insurance programs, like Medicaid and the Children’s Health Insurance Program (CHIP), also are available based on household income rather than work status, so stagnating wages for those at the bottom of the economic ladder also result in greater eligibility for these programs.