The GOP Is Dead. The GOP Rises Again. 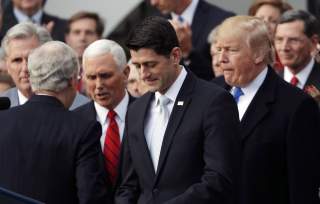 What would you do if you knew you only had twelve months to live? That’s a question that must weigh on the mind of House Speaker Paul Ryan. His biological life is not drawing to a close, but his political life is. This time next year, odds are that the GOP will have lost its majority in Congress. Even if the Republicans hang on, the speaker has signaled to friends that he leans toward retiring after 2018. He’ll have plenty of fresh company in the political graveyard, the way the midterms look set to go.

One Republican Party is dying, and another is being born. Donald Trump’s irresistible march to the White House in 2016 was just the beginning. Trump-like candidates, or at any rate anti-establishment Republicans, fell short of the Virginia GOP’s gubernatorial nomination or winning the special election in Alabama this year. But the telling thing is just how close Corey Stewart came to upsetting Ed Gillespie in the Old Dominion and that Roy Moore in Alabama was only stopped by allegations of predatory sexual behavior toward minors.

Old-guard Republicans can comfort themselves with the thought that as long as the hard right keeps nominating figures like Moore—or Paul Nehlen, the one-time primary challenger to Paul Ryan who is now known for dabbling in anti-Semitism—they will keep losing. But that’s only half of the story: the other half is that the Republican old guard shows no sign of winning back any of the hearts and minds that have been lost to the populist right. The voters themselves, not just the candidates, have different commitments today: opposition to free trade, for example, has been steadily growing among the Republican base. Outside of Utah, where he now hopes to run for Senate, this is not Mitt Romney’s party anymore.

The future may not belong to Moore or Nehlen, but it doesn’t belong to Romney or Ryan, either. And after what promises to be a bloody midterm reckoning, the GOP will be one step closer to whatever its next iteration will be. President Trump is in position to shape the party’s destiny. Will he take the chance to do so in 2018?

Trump would like to pass an infrastructure bill, which might get Ryan’s support and that of Senate Majority Leader Mitch McConnell, but would face opposition from the GOP’s small-government wing. With Democrats looking to run against Trump in November, they won’t have much desire to cooperate with the president and his party even to pass a spending bill they might otherwise agree with. The prospects for a major infrastructure bill getting through Congress look slim—worse than the odds faced by repealing Obamacare last year.

Yet McConnell, for one, thinks infrastructure has a better shot than Speaker Ryan’s dream project of entitlement reform. The narrowing of the Republican majority in the Senate with the addition of Democrat Doug Jones as the chamber’s newest member would make that a harder fight than passing tax reform was this year, even if Republicans could be counted on to stick together—which is never a safe bet. However, 2018 is the only chance that the Republicans currently serving in Congress are ever likely to get to tackle entitlements. Certainly for Ryan, it’s now or never: he’s a dead man anyway, so why not go out swinging? Who knows: if entitlement reform can succeed after tax reform has already sailed through, perhaps there’ll be a revival of the old Republican economic vision after all.

But probably not, even if Ryan could somehow deliver on entitlements. Polls suggest that voters may already punish the GOP for its tax bill, despite the fact that most Americans will see their taxes go down. Entitlement reform is unlikely to prove more popular. Even Newt Gingrich’s success in reforming welfare in 1996 went unrewarded in that year’s House elections and the 1998 midterms. Paul Ryan could get his fondest wish, and still his brand of Republicanism would be doomed.

Trump, for his part, has better cards in his hands now than he will this time next year. Bill Clinton transformed his presidency after the Democrats lost control of Congress, successfully rebranding himself as a deal-making centrist. (Just how far left Clinton moved in his first two years in office is now all but forgotten: he pushed progressive legislation on taxes, abortion, and gun control and set his wife up with a task force to remake American healthcare, among other initiatives.) But Democrats are unlikely to want to cooperate with Trump in 2019. Whatever Trump wants to get through Congress—the wall, other immigration measures or infrastructure—has to happen within twelve months. His presidency will outlive Paul Ryan, but his window for legislative action is just as narrow.

Can any legislation Trump or Ryan come up with avert a Republican disaster in November? Would Trump be tempted to use the one card in the president’s hand that might change the political calculus: namely, military action? The president has advisors who every day make the case for a hard line with North Korea and Iran. Come October, he would not have to invent a pretext for airstrikes against either target: the aides who have his ear would already have a rationale ready to deploy. Iran may be the likelier target, given the costs of conflict with North Korea. The mainstream media set a dangerous precedent by giving the president some of his only favorable coverage when he launched airstrikes against the Syrian government.

By all conventional measures, 2018 looks to be a harder year for Republicans than 2017 has been. Then again, President Trump defied expectations at the end of this year by getting his tax bill through Congress, just as he defied the odds in 2016 by winning the White House. The last two months of the year have proved to be politically very good ones for Donald Trump for two years running. He may yet find a way to make it three.