The GOP Tax Plan's Number One Goal: Back to Growth 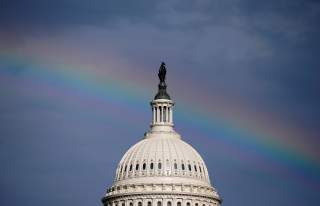 The “Tax Cuts and Jobs Act” has passed the House of Representatives, and the Senate will vote on its version of the legislation the week after Thanksgiving. Should both bills pass and the bodies agree on a final compromise legislative wording, it will change the American economy, American politics and the world.

Just what single piece of legislation could be that powerful?

The outlines of the tax reform/tax reduction bills are known. And the likelihood of final passage is as certain as anything can be in Washington, DC, as the House and Senate bills and the president’s vision all live within the “framework” agreed upon months ago. The only real differences are in timing and focus.

The corporate rate will drop from 35 percent—the highest in the industrialized world—down to 20 percent. After-tax cash flow for $100 in earnings will increase from $65 to $80—a 23 percent increase. Imagine what that will do to the stock market valuations. American competitiveness will allow firms to stay in the United States, rather than continuing to be at risk of purchase by foreign companies that enjoy lower corporate tax rates.

And Americans will join the rest of the world in adopting a territorial tax system that allows us to repatriate American business earnings without penalty.

Full and immediate business expensing will reduce the cost of capital and new investment. This change alone is projected to increase the size of the economy by 5 percent over the next decade. The end of the death tax will end the annual destruction of billions of dollars of accumulated life savings every generation, and create more than 150,000 jobs. The alternative minimum tax is slated for repeal, removing a second layer of taxation on companies and individuals. And smaller businesses that pay their business taxes through Subchapter S corporations or LLCs will see their top rate fall from a high of 44 percent towards 25 percent. No more will smaller businesses face tax rates significantly higher than major corporations.

Tax advantages—subsidies—for favored industries and incompetent cities and states will be repealed.

So what will this all do?

First, the American economy. The economic recovery that began in July 2009, six months into the Obama administration, has been the weakest recovery in modern American history. Annual growth has averaged less than 1.5 percent a year. The average U.S. growth rate from 1960 until Obama took office was 3.3 percent. The Reagan recovery—which followed both a collapse in employment, declining GDP at the same time we suffered under inflation rates of above 10 percent and a prime interest rate of over 20 percent—ran for seven years, averaging 3.5 percent per year.

The tax reduction and reform act outlined by the House, Senate and White House Republican leadership in the spring is designed to drive job creation and economic growth. While it also reforms the tax code, the focus has always been on increasing growth.

Democrats and media critics of the plan have focused on whether some Americans will get a bigger tax cut in dollars and/or percentage of their tax bill than others. But they miss the true first beneficiaries of the tax bill—those Americans whose income today is possibly zero because they are among the 12.8 million Americans who are unemployed or underemployed, or among the 524,000 who have actually left the workforce as discouraged workers.

The pundits have noted a growing hostility to immigration and immigrants, and to international trade. They suggest this is a withering of the American spirit, a sign of defeatism and withdrawal from the world. Or worse, proof that their assertion that Americans are all crypto-racists is accurate. But history shows that immigration and trade become unpopular whenever the economy weakens and Americans wonder “what happened.” Politicians welcome any answer other than that the government screwed up monetary policy, spent the nation into penury, and imposed unnecessary and burdensome increased taxes and regulations at the cost of growth and innovation.

When Reagan’s deregulation and tax cuts drove the economy forward in 1983 (four million new jobs), 1984 (3.4 million new jobs), 1985 (two million) and 1986 (2.1 million)—Congress voted and Reagan signed an immigration reform bill that was amnesty for 2.7 million illegal aliens. And NAFTA was proposed by Reagan, negotiated by Bush and signed by Clinton.

Tax cuts and deregulation lead to growth. Growth leads to more jobs, and an employed American is a cheerful American, indifferent or even welcoming toward expanded trade and immigration.

The tax bill is designed to change the direction and strength of our economy but will also change the electorate’s worldview. Republicans did poorly in the 1982 congressional elections, and Reagan’s popularity was low—because the economy was still weak. But when the full Reagan tax cuts took effect January 1983, we had growth for two years; that same once-unpopular Reagan won forty-nine states and re-election.

The tax bill will decide whether the GOP holds the House and strengthens in the Senate, and also how “popular” Trump will be. The importance of the tax bill to the November 2018 election is one reason to bet heavily that the GOP House, Senate and White House will “get it done.” The fury of the opposition strongly suggests that Chuck Schumer and Nancy Pelosi see the danger for their hopes of returning to power.

No less a predictor/reflector of the liberal/left worldview than Jeffrey Sachs has screamed that the reduction in American corporate rates—a belated response to the drop in business tax rates by every other nation in the world—would in fact drive our international competitors to further reduce their corporate income taxes.

Reagan’s tax cuts in 1981 and 1986 convinced much of the world to reduce individual and business tax rates. That helped the entire world grow, and created a virtuous competition to reduce the tax burden not just on Americans, but on our friends and allies as well. We are about to once again be the shining city on the hill, whose good example leads the world—not from behind, not from threats of invasion, occupation or war, but simply by being a good and successful example worthy of emulation. It costs us not one life and not one penny, and earns us no enemies.

The focus next year will be welfare reform, block-granting welfare (TANF), food stamps and Medicaid with work requirements and time limits to staying on welfare for able-bodied citizens. This will begin to bend down the cost curve of runaway entitlements, and shrink our unfunded liabilities, which are every bit as damaging as the present national debt.

Not bad for the first eighteen months in office.

But wait: there’s more. Next year will also bring another tax-reduction package—so if your favorite tax cut did not make it into the package this year, there will be another opportunity every year we have a GOP House, Senate and presidency.