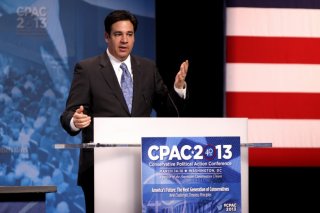 “You’re just wasting your time and you are squandering your conservative bona fides in the process,” she told him, adding he was also “squandering such a great opportunity to bond in a populist way with those American voters who are struggling now.”

While Labrador didn’t become the House majority leader, contemplating his immigration views isn’t a total waste of time for Republicans.

To start with, Labrador spent fifteen years as an immigration lawyer. He knows the system inside and out—and he knows all the ways people skirt it.

Second, Labrador is someone who initially partnered with Democrats on immigration reform and agrees with it in principle. But he also understands the deep distrust conservatives have of the Obama administration and congressional liberals on this issue. They already saw the 1986 amnesty in exchange for enforcement turn into a failed bait-and-switch.

That’s why Labrador abandoned the House equivalent of the Gang of Eight. He has been far more forceful than Cantor, Paul Ryan or, for that matter, Kevin McCarthy in exhorting the leadership not to force an immigration deal with the Democrats. He has stated that if House Speaker John Boehner pursues an immigration bill over the objections of his caucus, Boehner should—not could—lose his speakership.

Raised by a single mother in Puerto Rico, Labrador gives Republicans a chance to decouple their skepticism of comprehensive immigration reform from public perceptions of anti-Latino hostility. Since the death of Barbara Jordan, it has been too easy to dismiss amnesty opponents as bigots or xenophobes.

Having Hispanic Republicans who are more cautious about immigration legislation than Marco Rubio ride point on the issue won’t eliminate such smears. The Tea Party’s affection for black conservatives like Herman Cain and Ben Carson hasn’t stopped people from accusing the Tea Party of racism. But it can help.

Most importantly, some of Labrador’s substantive ideas for fixing immigration merit serious consideration. One is to drop or reduce the three- and ten-year penalty period that bars illegal immigrants from reapplying to enter the United States legally.

“I think most Republicans agree that the 3- and 10-year bars have to go away because right now the people that are here illegally, they have to go home to become legal, but then they have to remain home for ten years,” Labrador told the Washington Times. “We remove those bars from them, you could fix the status of about 25 percent of the people that are here illegally right now if they return to their home country and then they come back legally.”

Townhall editor Conn Carroll, an amnesty opponent, writes that Labrador’s proposal is “forward looking and would apply equally to everyone, regardless of whether or not they were already in the country today.” Most other ideas floated by Republican leaders still ultimately have the problem of promising to enforce the law tomorrow, while failing to enforce it today.

Labrador has also suggested that nothing be passed until the Obama administration shows it is serious about enforcement itself. Of the recent influx of children reportedly crossing the border in response to a recent executive order halting the deportations of young people who arrived as children, he said to Ingraham, “I would tell the president to send some planes and send all of those children back home.”

Where Labrador gets into trouble with conservatives like Ingraham is that he would allow some increases in legal immigration, particularly via green cards, for foreigners who graduate from American universities with advanced degrees in the fields of science, technology, engineering and math (STEM).

My own view is the STEM shortage is overblown at best and that it would be better to reduce legal immigration, especially during a period of wage stagnation and long-term unemployment. But perhaps some increases in skilled immigration along the lines of what Labrador envisions could be traded for tightening family reunification, where our leniency compared to many other developed countries is producing a mismatch between new immigration and the U.S. labor force.

Republican congressional leaders might be wise to put Labrador front and center on these issues. And fellow liberty-minded Republicans looking for a middle ground between outreach-oriented libertarianism and the Tea Party’s restrictionism—including at least one presidential contender I could mention—may also take notice.