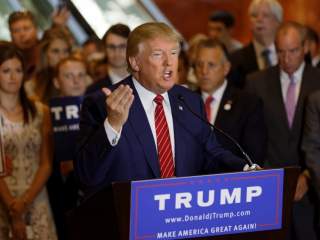 In his parliamentary novel Phineas Redux, Anthony Trollope observed, “The apostle of Christianity and the infidel can meet without the chance of a quarrel, but it is never safe to bring together two men who differ about a saint or a surplice.” It’s an observation that captures the current state of the Republican party. When National Review, for example, recently created a furor by emblazoning “Against Trump” on its cover, the magazine’s editors depicted themselves as defending the conservative citadel from a “philosophically unmoored” interloper. A phalanx of outside contributors, ranging from Glenn Beck to William Kristol, also excoriated Donald Trump. But something didn’t quite ring right. For all the indignation and expostulations about the New York billionaire’s run for the presidency, as Ira Stoll noted in the New York Sun, the magazine itself had previously supported a number of the policies that it was now attacking Trump for endorsing. “In its own illogical, inconsistent, ad hominem attacks,” wrote Stoll, “perhaps National Review is precisely the foe Mr. Trump deserves.”

Nor did NR’s complaints cut much ice with the Tea Party contingent: the magazine’s quondam heroine, Sarah Palin, who was originally discovered during a cruise to Alaska by Kristol and Fred Barnes, hailed Trump in Iowa: “Understand the way the system—the Establishment—works and has gotten us into the troubles we are in. The permanent political class has been doing the bidding of their campaign donor class.” As Sam Tanenhaus observes in this issue, the big-government conservatism and crusading foreign policy that the Republican strategist Karl Rove championed during the George W. Bush administration and tried to maintain with his American Crossroads Super PAC is besieged. The former wunderkind, Tanenhaus writes, “has become the hollow man of the Bush years, a figure of fun.” When Rove declared in his weekly column in the Wall Street Journal that Trump would be “the dream opponent” for the Democratic Party, he responded by dubbing Rove an “establishment flunky.”

With Trump and Ted Cruz warning against promoting democracy abroad, a foreign-policy vision that contrasts with the Bush era has emerged in the GOP. Senator Marco Rubio, the leading exponent of the neocon credo, is attacking them for apostasy:

"We have isolationist candidates who are apparently more passionate about weakening our military and intelligence capabilities than they are about destroying our enemies. Words and political stunts cannot ensure our security. ISIS cannot be filibustered."

Trump and Cruz seek to replace Rubio’s militant doctrine with another Republican tradition—an ideology of popular nationalism, coupled with an opposition to global elites and the dilution of national sovereignty—that dates at least to the League of Nations debate after World War I. Some trace these ideas back even further: writing in TNI in 1999, Walter Russell Mead described a “Jacksonian Tradition” in American politics, “suspicious of untrammeled federal power . . . skeptical about the prospects for domestic and foreign do-gooding,” and shaped by notions of national and personal honor. Jacksonians, Mead said, believed that honor applied to war, too; “all rules are off” when fighting dishonorable enemies. Ted Cruz’s promises to “carpet bomb ISIS into oblivion” and “find out . . . if sand can glow in the dark” are music to Jacksonian ears. And Donald Trump’s speeches are particularly rife with Jacksonian talk of honor and dishonor: Iran’s seizure of American sailors was “an absolute disgrace” that showed “a lack of respect for our country and certainly our president”; China’s island-building and trade practices show “they don’t respect us”; “if Putin respects me . . . I’ll accept that.”

After World War II, the Republican party was home to a conservative movement that looked upon globalism with suspicion. Consider Herbert Hoover. In December 1950, Hoover delivered a speech that targeted Harry S. Truman’s sweeping Cold War policies. America, Hoover said, had to recognize that there were limits to its power. It should retreat from Europe and Asia and make “this Western Hemisphere the Gibraltar of Western civilization.” Next, in 1951, the GOP objected to increasing American ground forces in NATO. Ohio senator Robert A. Taft said, “the principal purpose of the foreign policy of the United States is to maintain the liberty of our people.” In addition, Ohio senator John W. Bricker proposed constitutional amendments aimed at crippling the power of the president to negotiate foreign treaties.

It wasn’t just Truman who came under fire from the right. Eisenhower had to go to some lengths to assuage its apprehensions. In order to secure Taft’s support after he won the 1952 Republican nomination, Dwight Eisenhower invited him to his home in New York. In his biography Buckley, Carl T. Bogus notes that Taft prevailed upon Eisenhower to issue a joint statement that the principal issue in the campaign was to battle for “liberty against the creeping socialism in every domestic field.” Eisenhower also promised to cut taxes and said that his disputes with the isolationist Taft over foreign policy were “differences in degree.” Republican liberals were mortified and dubbed it “Surrender at Morningside Heights.” But as president, Eisenhower did not attempt to repeal the New Deal or disband NATO, both bête noires of the right. Quite the contrary. In the 1950s, Senator Prescott Bush, as E.J. Dionne Jr. reports in his new book Why The Right Went Wrong, explained the Eisenhower credo in a Lincoln Day speech this way: “It is a philosophy of progressive moderation, as the president has called it, or of moderate progressivism, as others name it.” None of this stopped the right from attacking the Eisenhower administration as a nest of Soviet appeasers: William F. Buckley, Jr. lambasted Eisenhower in 1956 in a National Review editorial as “undaunted by principle . . . uncommitted to any estimate of the nature or potential of the enemy.” (By 1972, Garry Wills observes in the New York Review of Books, “Buckley joined the effort to ‘primary’ [Richard] Nixon . . . by running John Ashbrook against him.”)

The right went on to cry betrayal once more in July 1960. This time it was over a deal between the liberal and conservative factions in the GOP. New York Governor Nelson Rockefeller and vice-president Nixon met at the former’s Fifth Avenue apartment to strike a détente. What became known as “The Treaty of Fifth Avenue” was the result. In it, Nixon pledged to work to end the “remaining vestiges of segregation” and to stimulate the economy. Conservatives were incensed by what they saw as Nixon’s capitulation.

With Barry Goldwater’s campaign for the presidency in 1964, the right went on the attack against the liberal Republican eastern establishment for failing to stand up to communism and for kowtowing to the United Nations. Goldwater may have flamed out, but he left a lasting legacy for the GOP by setting the stage for the Reagan revolution. In his book Conscience of a Conservative, Goldwater declared,

"I have little interest in streamlining government or in making it more efficient, for I mean to reduce its size. I do not undertake to promote welfare, for I propose to extend freedom. My aim is not to pass laws, but to repeal them. It is not to inaugurate new programs, but to cancel old ones that do violence to the Constitution . . ."

Even as a more populist conservatism emerged in the ranks of the GOP, the intellectual right also welcomed a new faction. National Review stated in 1971 to the fledgling neoconservatives, “Come on in, the water’s fine.” Not until 9/11, however, did the neocon credo of seeking to implant democracy abroad by force become the dominant Republican orthodoxy. A measure of how seamlessly the neocons had melded with the wider conservative movement came in March 2003 in National Review, when the prominent neocon David Frum excommunicated pundits like Robert Novak and Patrick Buchanan as “unpatriotic conservatives.” He said that they wished for America’s defeat after September 11 and that

"they began by hating the neoconservatives. They came to hate their party and this president. They have finished by hating their country. War is a great clarifier. It forces people to take sides . . . Now we turn our backs on them."

(Since then, Frum has himself turned his back on the conservative movement, leaving the American Enterprise Institute and becoming a correspondent for the Atlantic.)

But if, as Christopher Buckley notes in this issue about David Greenberg’s deft history of spin, “America’s exceptionalism extends to its mastery of public opinion and advertising and image making,” then the gloss began to wear off for the Bush administration’s gauzy “Mission Accomplished” once it met the brutal realities of Iraq. Coupled with the financial crash of 2008, the stage was set for a new confrontation between the establishment and populist upstarts in both the Republican and Democratic parties.

The result is that alarms are sounding in the neocon camp. In January Peter Wehner said about Trump in the New York Times, “His nomination would pose a profound threat to the Republican Party and conservatism, in ways that Hillary Clinton never could.” David Brooks wrote in the New York Times, “very few presidents are so terrible that they genuinely endanger their own nation, but Trump and Cruz would go there and beyond.” Brooks ended with a call for the GOP to reject radicalism and embrace an emollient Reformicon agenda of wage subsidies and child tax credits.