The GOP's Odd Stance on the Patriot Act 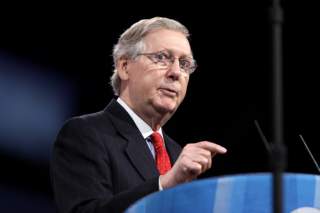 Let’s get this straight. Republican senators are outraged by government overreach, which is why they are manning the barracks against the Environmental Protection Agency’s (EPA) water rule.

They are also outraged by Rand Paul, who has forced warrantless bulk telephone metadata collection ensnaring millions of ordinary Americans to lapse.

The EPA is indeed out of control. There is also a legitimate debate to be had over how to balance liberty and security, both goods the federal government is tasked with preserving. But there is a bit of cognitive dissonance here.

Maybe there’s a compelling case for the expired provisions of the Patriot Act, but relatively few of Paul’s GOP detractors have deigned to make it. For the most part, they have operated with a strong presumption in favor of government power that they would otherwise reject if it was a domestic program.

“I think he’s nestled in with a very large bunch of very radical people—from the left to the right,” Sen. Orrin Hatch has been quoted as saying. “I don’t know if he feels comfortable being with all those leftists who hate the Patriot Act.”

“We need to recognize that terrorist tactics and the nature of the threat have changed, and that at a moment of elevated threat it would be a mistake to take from our intelligence community any of the valuable tools needed to build a complete picture of terrorist networks and their plans—such as the bulk data collection program,” said Senate Majority Leader Mitch McConnell, who hails from Paul’s home state of Kentucky.

Notice that the national-security benefits of the bulk data collection program—which a federal court recently ruled wasn’t even authorized by Section 215 of the Patriot Act in the first place—is asserted more often than proven in these digs against Paul.

Both a presidentially appointed Surveillance Review Group and the Privacy and Civil Liberties Oversight Board concluded otherwise, the latter finding there was not “a single instance involving a threat to the United States in which the telephone records program made a concrete difference in the outcome of a counterterrorism investigation.”

Yet none of these senators hold a candle to New Jersey Gov. Chris Christie, who, like Paul, is likely to seek the 2016 Republican presidential nomination. “I think that folks like those who are arguing against it have a severe case of amnesia of what this country felt like and what we experienced in the days after September 11,” Christie said.

Again, where is the argument as opposed to mere assertion that the controversial program can in fact stop future 9/11 terrorist attacks?

Imagine if a school teacher stood up at a town-hall meeting in New Jersey and protested Christie’s education budget on the basis of her experience as an educator? We don’t have to imagine. We’ve seen Christie brush of such challenges in the past, arguing that he has a responsibility to the taxpayer.

Christie’s experience as U.S. attorney may be a good counterargument to Paul’s position. But conservatives aren’t supposed to automatically give the government more power because the official wielding that power says it is necessary.

Few people are disputing that the government should be able to obtain records that are relevant to a bona fide national-security investigation, though that power should be subject to some checks and balances.

What is being debated is whether the government can collect virtually everyone’s telephone records on the grounds that they could become relevant.

Not only did the Court of Appeals for the Second Circuit rule against this overbroad interpretation, but Wisconsin Rep. James Sensenbrenner, a Republican who helped write the Patriot Act and has since become a proponent of surveillance reform, has called it a “gross invasion of privacy” not actually permitted by Section 215.

There are also questions about whether the volume of data being collected makes it more difficult or less difficult to gather meaningful intelligence in the fight against terrorism. Instead of addressing any of these objections, many Republicans are making arguments similar to those of liberals who contend that Obamacare opponents want people to be uninsured and sick, critics of the Department of Education don’t care if children get a good education and lawmakers who would rein in the EPA are liberating polluters.

You would expect more from the party of limited government.