The Grand Bargain: What Iran Conceded in the Nuclear Talks 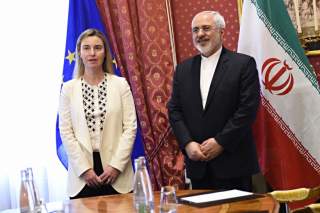 Since the P5+1 and Iran announced the agreed parameters for a comprehensive settlement of the Iran nuclear issue earlier this month, Washington punditry has obsessed over the fine points of both the joint statement read by EU Foreign Minister Mogherini and Iranian FM Zarif, and the fact sheet released by the Obama administration, to identify concessions made by the United States.

Much attention has centered on centrifuge numbers, the strategic implications of the Iranian nuclear program within the context of the deal and the decision to provide early sanctions relief to Iran in exchange for substantial nuclear steps by Iran.

As with everything in Washington as late, the discussion quickly divided into two camps: those convinced that Obama gave up critical advantage over Iran too readily in order to get a nuclear deal that, even if better than what was anticipated, still is not satisfactory; and, those convinced that, given the alternatives, what Obama achieved was worth such concessions.

Lost in all of the noise is any consideration of what Iran had to give up in order to get a deal and the value of what it will really get from sanctions relief (bearing in mind, of course, the fact that no deal has actually yet been signed and its premature to start the score-carding). For some, it is assumed that Iran’s temporary concessions are so meager that, in effect, the Iranians sacrificed nothing for a deal.

But, this misses an important point: Iran had to make several compromises in order to get a satisfactory nuclear deal and, in the end, the separation between Iran’s public and private stances is far wider than those of the Obama administration. Moreover, the U.S. readiness to engage in sanctions relief is not a give-away to Iran but rather a result of a proportional exchange of concessions that, though some may wish not to hear it, is the only way that diplomacy actually works.

To get this far, Iran had to make several compromises on its longstanding nuclear policy. This started in the Joint Plan of Action, in which Iran agreed to permit the P5+1 (and the United States in particular) to have a role in its nuclear program decision-making. For a country as proud of its independence as Iran, the significance of this step should not be discounted. And, a similar mindset is manifest in what emerged from Lausanne earlier this month.

For example, Iran stated clearly and unambiguously in early 2014 that it would not pull back from its centrifuge research and development activities. On January 23, 2014, FM Zarif told CNN that “in the context of R&D and peaceful nuclear technology, we will not accept any limitations.” Supreme Leader Khamenei went even farther, noting in series of redlines that were promulgated via his official Twitter account, that Iran’s “nuclear science movement should not come to a halt or even slow down.”

Iran made similar comments about not backing down with respect to centrifuge numbers. President Rouhani said on January 23, 2014, that Iran would “not under any circumstances” destroy any of its existing centrifuges. Instead, Iran underscored that it would require as many centrifuges as necessary to fuel its existing reactors, including the 1,000 megawatt power reactor at Bushehr (which is estimated to require around 100,000 centrifuges’ worth of work a year). Supreme Leader Khamenei reinforced this position with his now famous statement in July 2014 that Iran required 190,000 separative work units (SWU), which would roughly equate to 190,000 centrifuges. Atomic Energy Organization of Iran President Ali Salehi noted a short while after Khamenei’s comments that Iran would need this amount of SWU within 8 years in order to meet its enrichment demands.

But, even the most critical reading of either the P5+1-Iran Joint Statement or the U.S. fact sheet support the contention that, if anything, Iran made sweeping concessions to the U.S. position in this regard. The Joint Statement noted that:

As Iran pursues a peaceful nuclear programme, Iran's enrichment capacity, enrichment level and stockpile will be limited for specified durations, and there will be no other enrichment facility than Natanz. Iran's research and development on centrifuges will be carried out on a scope and schedule that has been mutually agreed.

Iran therefore conceded to limitations on its R&D activities, which at a minimum will be subject to a mutually agreed scope and schedule, as well as to the size of its enrichment program. The U.S. factsheet makes this concession even more stark, noting that there would be limits on Iran’s ability to use advanced centrifuges as well as on their contribution to Iran’s ability to engage in an enrichment breakout.

As for 190,000 centrifuges, the U.S. factsheet makes abundantly clear that, for 10 years, Iran would be limited to no more than 6,104 installed centrifuges, not even 4 percent of Khamenei’s demand.

In fact, the final positions reached in the Joint Statement and the U.S. factsheet bear more in common with the U.S. position than the Iranian position.

In February 2014, for instance, Under Secretary of State for Political Affairs Wendy Sherman testified before the Senate Foreign Relations Committee, and observed that: “there is no question it would be far preferable if Iran did not have an indigenous enrichment capability...but it may be that at the end of a comprehensive agreement, we have allowed for consideration of a very small, limited enrichment program to meet practical needs that would be highly monitored, highly verified, with intrusive inspections over a very long duration of time...”

She noted as well, in response to a question from Senator Rubio, that “our line in the sand on the enrichment issue is that any comprehensive agreement should give us full confidence and assurance in a verifiable manner that Iran cannot obtain a nuclear weapon.” She refused to be drawn out on a specific number of centrifuges, but confirmed that there would be a reduction.

Some may quibble with the amount of the reduction reached and definition of the words “very small.” No dictionary will be of aid in this situation, as interpretation is all in the eye of the beholder. However, 4 percent of Iran’s desired outcome in eight years and 30 percent of its currently installed centrifuges can be reasonably described as “very small.”

Likewise, Iran made others concessions to get a deal. The Joint Statement indicates that a:

set of measures have been agreed to monitor the provisions of the JCPOA including implementation of the modified Code 3.1 and provisional application of the Additional Protocol. The International Atomic Energy Agency (IAEA) will be permitted the use of modern technologies and will have enhanced access through agreed procedures, including to clarify past and present issues.

The U.S. factsheet goes beyond this, noting that Iran will grant the IAEA “continuous surveillance” of its uranium mills and centrifuge production and storage facilities. The factsheet also indicates that inspectors will have access to Iran’s supply chain for its nuclear program and that included in this will be a procurement channel to help prevent the diversion of procured items to illicit purposes.

This is a far cry from Supreme Leader Khamenei's October 2014 redline that the “International Atomic Energy Agency should establish normal and non-extraordinary relations with Iran.”

But, it is very much in keeping with the concept of “unprecedented” transparency that has been advanced by President Obama and his cabinet. This particular comment has been criticized on several occasions and, in some cases, the criticism is valid.

For example, to consider the level of access to be granted under the comprehensive agreement to be negotiated with Iran as “unprecedented” without qualification is to argue that it would go beyond that which the international community had in Iraq in the 1990s and after 2003. But, in fact, this is an important distinction in its own right: to get more than the kinds of access that are promised in the U.S. factsheet, it had to go to war with the inspected country and, in 2003, occupy it for eight years.

Did Iran get a bad deal?

The point of this litany is not to suggest that the Iranians got a bad deal from the P5+1 in the parameters agreed thus far. It actually describes a set of concessions on both sides, both to one another and to the realities of nuclear physics.

For example, on Arak, the Iranians early on in 2014 acknowledged the concerns of the international community with respect to its potential plutonium output and offered to modify the reactor to address this risk. For her part, Sherman noted in her aforementioned testimony that “we do not believe there is any reason for a heavy water reactor at all in a civil nuclear program of the type that Iran is interested in,” leaving open the possibility of modifying the reactor to make it more compatible with Iranian needs and international concerns.

The Joint Statement reached by the P5+1 and Iran, as well as the U.S. factsheet, support the contention that this more modest gap has been closed, even if the final redesign of the reactor has yet to be settled.