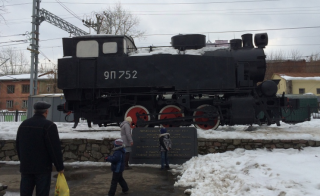 The fact that most of the Ukrainians who fled their country last year went to Russia may come as a surprise to some. The reasons for this are interesting and have been skillfully examined in recent articles. Where are the Ukrainian refugees going in Russia and what awaits them when they arrive? How are they being treated and what do they think of their new surroundings? We took a closer look at these questions in Perm, a city and region in the Ural Mountains, which in 2014 became one of the major hubs in Russia for Ukrainian refugees.

Perm may not be on the radar of most Western readers, with the exception of fans of Sergei Diaghilev or Boris Pasternak, who each lived in the Perm region for a time, or those familiar with the dissident movement. Perm-36 included some of the harshest labor camps where the Soviet government sent political prisoners during the crackdown in the 1960s and early 1970s. The last political prisoner held there was released only in the late 1980s. The thought of seeking refuge in a place with such a dark history might sound strange, but this question is not likely in the forefront of the refugees’ minds. Instead, a more common thought might be “Where is Perm?” as one refugee in Donetsk asked in Andrew Roth’s article last fall.

There are several reasons why so many refugees from Eastern Ukraine have ended up in Perm, which is not one of Russia’s most well-known cities, despite its claims to fame and infamy, noted above. First, while it’s among Russia’s 15 most populous cities, its smaller size relative to Moscow and St. Petersburg allows it to accept refugees from Ukraine, while the aforementioned metropolises have already reached their refugee quotas. Cities like Perm receive federal funding to offer assistance with housing and employment. The budget for assistance to Ukrainian refugees was recently announced, and Perm krai (krai is one of the types of administrative divisions of territories in Russia) is to receive 34,516,000 rubles ($520,000) in 2015.

Second, until 2013, Perm was the only Russian city that had a center for receiving refugees and asylum-seekers from abroad (now there are three). Russia’s judicial practice for providing refugee status to asylum-seekers was even developed in Perm. Perm’s history of taking in refugees goes at least as far back as World War II, when it received mass evacuations from the more Western regions of Russia. This unique aspect of its history, as well as the fact that it has long been a multiconfessional region, helps cultivate a more tolerant attitude in Perm for refugees and people from elsewhere.

(Recommended: Is It Time For Regime Change in Russia?)

Third, Perm’s geographic location is a convenient transfer point from which Ukrainian refugees can move further into the country: either to the north of Russia, to the Yamalo-Nenets region, for example, where more lucrative employment opportunities exist, or to other Russian cities where their relatives live.

The majority of Ukrainian refugees come to Perm in groups organized by the Russian Federal Migration Service (FMS). Refugees themselves decide which city or region to go to prior to leaving Ukraine. Often they are approached in a refugee camp and given a list of cities in Russia from which they can choose. As one couple from Donetsk described this process, before they left they were promised clothing and assistance with housing in Perm, but the reality of what refugees find upon arrival varies widely, as will be discussed below.

According to the Office of the United Nations High Commissioner for Refugees, as of December 2014, upwards of 430,000 Ukrainians had applied for refugee status or other forms of legal residency in Russia. The refugees who come unofficially, i.e. not registering with the FMS, make it difficult to count the total number of Ukrainian refugees in the country, however. For Perm krai, the regional FMS office reports that 11,124 refugees registered there in 2014. Among them, 2,454 families (3,307 people) applied for temporary asylum status and only 11 families (14 people) applied for official refugee status.

Last summer, several shelters were established in Perm krai to host Ukrainian refugees. Unused schools, orphanages, summer camps, and sanatoriums were used as temporary shelters. Every refugee was provided with a place to sleep, bedding, and towels, and the facilities had TVs, telephones, showers, and washing machines. The refugees were fed and also received psychological and medical assistance, if needed. However, once fall came, the majority of the shelters were closed, forcing the refugees to seek out other options. Some Russian families have invited Ukrainian refugees to live with them until they find their own place. Other refugees were given rooms in dormitories. The majority of refugees in Perm krai, however, eventually moved on to other Russian cities or returned home to Ukraine.

The local Perm media showed a variety of reactions of the Ukrainian refugees to their living conditions and treatment in Perm krai. Women staying at a military academy several miles outside the city of Perm were quoted as saying “Our stay here is like a summer camp holiday. After the hell we experienced in Ukraine, this is just a blessing.” Another refugee at the military academy, who is the mother of three children, said, “We have everything we need for a comfortable stay. Volunteers work with us continuously. They go to bed later than everybody and wake up earlier than everybody. They address our every need. Each of us had a comprehensive medical exam and was given a SIM card so we could stay connected with our relatives in Ukraine. Our children have everything: from diapers to new bikes.” On the popular Russian social media site vkontakte, an open group called “We will help Ukraine in Perm! Help for Refugees” (Поможем Украине в Перми! Помощь беженцам!) has roughly 1,775 members, who post items both needed and available, in a format similar to Freecycle. The group also organizes activities and parties for refugee children, and shares important information about refugee status and regulations.

However, there were also stories in the local media of poor treatment of refugees. For example, a group of about 200 refugees, who arrived in Perm krai in the end of August, was placed in a school for juvenile offenders located in the small town of Teplaya Gora, 200 miles from Perm. The remote distance and the conditions of the school created a much worse experience than refugees experienced in other locations.

Reporters from the online news portal Properm.ru went to Teplaya Gora to check out the living conditions and were not allowed to enter the building. They still managed to interview a few Ukrainians staying there. Larisa, a middle-aged woman from Donetsk, told reporters about the bad conditions and a feeling of isolation and uncertainty in the shelter. Shortly after the interview was published, the refugees were moved from Teplaya Gora to another town. Special Human Rights Envoy Margolina admitted that “placing people in such an isolated location was a mistake from the very beginning.” On a positive note, the incident in Teplaya Gora seems to be the worst case of treatment towards the refugees in Perm krai, and it was rectified fairly quickly. In general, the refugees had few complaints with their accommodations in the shelters.

While most of the refugees leave Perm for other cities, some who have found jobs and housing prefer to put down roots in the region. Those who have stayed tend to have experience in fields such as teaching, accounting, or nursing. They are also generally whole families – i.e., a mother, father, and children. Another factor is age. Young families tend to take more risks, and are more ready to give up their property in Ukraine to start new lives in Russia. Other refugees, and typically those who are older, still hope to return to Ukraine when the situation in the east has stabilized. Older refugees tend to have a more difficult time adapting to life in Russia and still own property in Ukraine.

For those refugees who want to stay in Russia permanently, their biggest concerns are finding suitable employment and affordable housing, which form a vicious cycle. Even once the refugees find employment, most of the jobs available to them are so low-paid that their monthly wages wouldn’t even cover rent. For example, while the cost of renting an apartment in Perm is around 15,000 rubles per month, most jobs available to the refugees have a monthly salary of 6,000-8,000 rubles. Employers often take advantage of the refugees’ desperate position by offering them lower pay than a Russian citizen would receive. For example, when 41-year-old Igor Morozov inquired about a vacancy in Okhansk (a town in Perm krai) for a truck loader opening that paid 20,000 rubles per month, the employer told him the pay was 7,000 rubles once he heard that Morozov was a refugee from Ukraine. This situation is by no means limited to Ukrainian refugees; it is also common for other refugees to Perm, not to mention many Central Asian migrants who are usually paid considerably less than Russians.