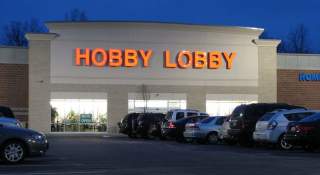 Social liberalism is becoming illiberal. That is the only conclusion that can be reached from the unhinged reaction to the Supreme Court’s Hobby Lobby decision, which was being mischaracterized before it was even handed down.

Disagree with moral qualms about abortion-inducing drugs if you would like, as many people do. But the source of this opposition is not vague discomfort. Abortion opponents believe it springs from the most universally accepted of the Ten Commandments: “Thou shalt not kill.”

Salon took the ruling as another opportunity to claim John Roberts’ Court has been “disgraced by corporations and theocrats.” The Hobby Lobby case includes both religious people and corporations—or worse, corporate personhood and fetal personhood.

Placards wielded by protesters outside the Supreme Court warned of the oncoming American theocracy. Was the America of Barack Obama’s first term a theocracy? Was birth control “banned” prior to the enactment of Obamacare? Is it banned for the millions who work for employers already exempted from its contraception mandates by the Obama administration itself?

To ask these questions is to answer them. Reading not only the activist chatter but the commentary from middle-brow media outlets and professional political observers, one would think the answers are in serious doubt.

It was not always this way. As I have written here before, liberals once overwhelmingly supported the legislation on which the Supreme Court’s ruling was based, the Religious Freedom Restoration Act of 1993. It was signed into law by President Bill Clinton, its enactment praised by the New York Times editorial board.

“The Religious Freedom Restoration Act reasserts a broadly accepted American concept of giving wide latitude to religious practices that many might regard as odd or unconventional,” the Gray Lady commented. When the subject was American Indians using peyote, the paper assumed that was a good thing. When it is applied to Catholics who object to contraception or evangelicals who oppose abortion—Hobby Lobby was willing to cover sixteen nonabortifacient contraceptive methods for its employees—that goes out the window.

Most conservatives supported the Religious Freedom Restoration Act, too. But it is telling that the Supreme Court decision it was passed to fix was issued by a conservative majority. One of the three “no” votes came from Jesse Helms.

“Before 1990, when law and religion collided, the Court had required government to show a compelling interest and to use the least intrusive method of enforcement,” the Times editorialized. A case can be made for the compelling interest in ensuring access to birth control. But it is exceedingly difficult to argue that the Obama administration’s mandates are “the least intrusive method” of achieving that policy goal. A desire to relieve that burden on religious employers and instead consider less coercive means is not in the same moral universe as a theocracy.

The Hobby Lobby reaction is not an isolated example. In the case of Brendan Eich, social liberals were clamoring for a CEO to be fired from his job over a single donation in support of a cause—a successful California ballot initiative reaffirming marriage as the union of a man and woman—that few, if any, of his colleagues even knew he advocated. Despite an impressive history with his company and no record of mistreatment of any employee, Eich was effectively ousted.

Meanwhile, the same people who shouted for Eich’s scalp will vote for Hillary Clinton, even though her husband signed and she, for a decade, defended the federal Defense of Marriage Act. Barack Obama denied that marriage was a “civil right” as a U.S. Senate candidate from Illinois in 2004 and ran for president in 2008 as a nominal opponent of gay marriage.

Clinton and Obama will get a pass because, it is widely assumed, they didn’t really mean it. In any event, they changed their positions while Eich refused to recant. But the late Paul Wellstone, a liberal’s liberal, was by all accounts a sincere opponent of same-sex marriage. Walter Fauntroy, a founding member of the Congressional Black Caucus, who marched with Al Sharpton against the inauguration of George W. Bush, was affiliated with groups opposed to same-sex marriage.

Even if Wellstone and Fauntroy were wrong, is it not possible to have some charity toward people who believe marriage is a gendered institution—as was once almost universally believed—especially as the cause of gay marriage appears to be winning?

Instead many social liberals behave as if error has no rights, treating disagreement as a denial of common humanity. That’s not to say that this tendency has been missing from social conservatism, either in the past or present. Nor should conservative Christians forget that the Bible foretold much worse mistreatment of believers than a few poorly reasoned tweets and angry Salon articles.

But when you have people wondering whether we should have six Catholics on the Supreme Court and musing about “concerns about the compatibility between being a Catholic and being a good citizen,” we have something closer to a Jack Chick tract than classical liberalism.