The Great-Power Summit Most Americans Don't Know About 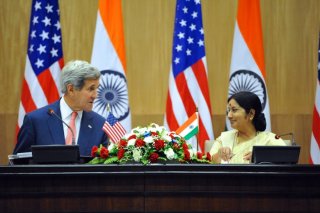 With the United States consumed by foreign-policy crises around the globe, many Americans are not according much importance to the upcoming summit between President Barack Obama and Indian Prime Minister Narendra Modi. In fact, many Americans likely have no idea it is even happening.

And that is a terrible shame.

Americans should care about Modi’s visit because of the tremendous strategic significance of the country he leads. With over 1.2 billion people (a sixth of all humanity), the world’s third largest economy (on a purchasing power basis), the third largest army, nuclear-weapons capability, rocket technology to put a satellite around Mars at one ninth the NASA cost (and on the first try) and a deep reservoir of young, talented workers, India has the ability to help the United States tackle an array of major international challenges.

High on this list is Islamist terrorism. On December 13, 2001, just three months after the United States experienced the 9/11 attacks, militants tried to decapitate India’s political leadership by attacking Parliament. Then came the Mumbai attacks of November 2008. One can’t easily forget those images of the city on fire as terrorists went on a rampage, killing 166 people. The United States and India share a common enemy in terrorism. The Islamic State group has identified both India and the United States as primary targets, and Al Qaeda has announced the establishment of a new South Asian affiliate to bring more terrorism to India.

Additionally, India has strong ties to Afghanistan’s leaders, and it has signed a strategic partnership agreement with Kabul. For these reasons, New Delhi can be a force for stability as the United States withdraws most of its troops and materiel from that country by year’s end. Likewise, India shares civilizational ties with Iran and has long looked to it as a source of energy imports. India’s relations with Iran put it in an advantageous position to help Washington pursue a nuclear deal with Tehran.

Then there is China. India has not forgotten how the United States stood with it after the Chinese invasion of India in 1962. India won’t be a counterweight to China, but it can still play a significant role in moderating Chinese conduct in the South China Sea and Chinese adventurism in the Indian Ocean—objectives that Washington would very much like to be achieved.

India can also be helpful in moderating the conduct of Russia. As it faces new difficulties finding receptive European markets for its gas exports, Russia is turning to India to fill this gap. And yet for India, the United States is also an attractive potential source of gas—as well as the world’s leading source of energy technology (the United States, incidentally, has already displaced Russia as India’s leading defense supplier). A stronger U.S.-Indian energy relationship can be helpful in bringing Putin’s Russia to a fuller understanding of its obligations to operate within the bounds of international norms, which include not annexing its neighbors.

U.S.-Indian economic engagement more broadly has been the historical driver that has steered the two countries from estrangement during much of the Cold War to a more recent period of partnership. Commercial diplomacy holds vast potential to bring greater prosperity to Americans and Indians alike. In addition to selling over $9 billion in U.S. defense equipment and security systems to India since 9/11, U.S.-Indian trade in goods and services now approaches $150 billion per year, with every billion dollars’ worth of exports accounting for thousands of jobs. And yet there is much more to be done on the trade front. Consider that the United States trades far more with China than with India, and that China has recently replaced the United States as India’s leading trade partner. Additionally, implementation of the U.S.-Indian civil nuclear deal—finalized in 2008, but moribund today because of liability issues—could alone generate billions in U.S. exports and thousands of American jobs.

Meanwhile, Indian companies are now significant investors in the United States. A recent study produced by the Confederation of Indian Industry shows that 68 Indian companies have boosted employment in the United States by investing nearly $17 billion stateside. U.S. investment in India is about $28 billion, but this is only a fraction of what it should be. Prime Minister Modi realizes this, and he has promised a “red carpet instead of red tape” to U.S. investors.

Indeed, it is this new “can do” attitude of Modi’s that offers a great opportunity for Americans and Indians alike. But this opportunity can’t be seized simply by mouthing platitudes about “common values,” the world’s “two greatest democracies” and “natural partnership.”

This is because U.S.-Indian relations are afflicted with real and serious policy divides that require major adjustments on both sides. The impasse in Geneva over WTO trade facilitation and food security; India’s expression of “understanding” about Russian annexation of Crimea and its intervention in southeast Ukraine; India’s reluctance to bring pressure to bear on Iran; and a host of trade issues including visas, tariffs, local content requirements and U.S. discrimination in the export of liquefied natural gas—these all need to be faced squarely and substantively when Prime Minister Modi and President Obama meet in Washington.

The good news—and the main reason Americans should care about Modi’s visit to the United States—is that for the first time in decades, thanks to the huge victory it earned in this year’s election, India’s government enjoys a strong mandate. Under the direction of one of its most decisive leaders in years, the government now enjoys the political capital to make bold decisions that stand to benefit both India and the United States.

In essence, Modi’s visit represents an opportunity to reinvigorate the U.S.-Indian relationship by placing it firmly on a path away from estrangement and toward greater partnership.

Ray Vickery, a former Wilson Center Public Policy Scholar and Assistant Secretary of Commerce in the Clinton Administration, is Of Counsel to Hogan Lovells and Senior Advisor to the Albright Stonebridge Group.

Michael Kugelman is the Wilson Center’s senior associate for South Asia. The views expressed in this article are solely those of the authors.