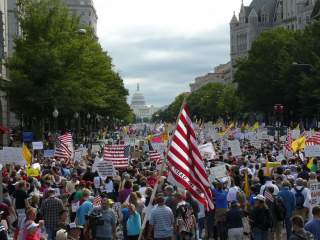 Several recent articles highlight the state of the Tea Party movement in America some four years after it emerged on the scene. They also reflect a fundamental reality of how politics work in the U.S. system.

A week ago, Wall Street Journal reporter Janet Hook produced an analysis of Republican Party politics that posited the idea that, while hardline Tea Party candidates aren’t emerging in GOP primaries these days with the force they displayed in 2010 and 2012, the GOP itself has moved toward many Tea Party positions in order to neutralize the Tea Party insurgency. She cited the recent GOP primary results in North Carolina, where the state House speaker, Thom Tillis, backed by the party establishment, decisively defeated a Tea Party candidate for the GOP nomination to challenge Democratic Sen. Kay Hagan.

But, notes Hook, “Mr. Tillis is no political centrist.” In fact, he has embraced many positions promoted by Tea Party forces in recent years. He questioned whether climate change is really in progress, opposed federal actions establishing a minimum wage, and suggested that perhaps the Department of Education should be abolished. Hook quoted an official of the Ohio GOP as saying, “The tea party has a home in the Republican Party. I don’t think it’s the end of the tea party.”

Then, the other day, the Journal’s Washington columnist, Kimberley A. Strassel, offered some intriguing reporting on what she called the GOP’s “trade-up strategy” in state races around the country. It seems that local party activists are targeting state legislators and executive officials who have been reluctant to get with the conservative program of tax reduction, pension reform and education overhaul. Strassel points out that the Republicans emerged from their blowout 2010 midterm elections with extraordinary local power, including twenty-three states in which it controls the governorship and both branches of the legislature.

But, writes Strassel, grassroots activists have become increasingly frustrated that many of these solidly conservative parts of the country aren’t embracing the state-reform push with sufficient enthusiasm, and so they are “targeting the bottlenecks—going after lackluster Republicans in primaries, rallying around free-market gubernatorial candidates, and working to get final numbers for majorities or supermajorities in key states.” She cites Kansas, where state Senate Republicans balked at governor Sam Brownback’s tax reform initiatives. Local groups went after twelve holdouts, and in 2012, nine were defeated in primaries by more conservative challengers. This is happening in such places more and more now, she suggests.

None of this is surprising to those who never bought the conventional wisdom, mostly from liberal commentators and partisan combatants, that the Tea Party was some kind of political aberration that would burn itself out eventually as the country moved back toward a saner political environment. In truth, the Tea Party reflected a large body of political sentiment anxious and upset about the direction of the country. As long as that direction persists, the Tea Party sentiment, in some form or another, will persist as well—until it gets absorbed into mainstream politics, which is what is happening now.

A review of such movements in the country’s political history bolsters this view over the more conventional interpretation of Tea Party as aberration. Consider the Ross Perot presidential candidacy of 1992, when the Texas billionaire, running as an independent, captured 19 percent of the vote in an insurgency attack on what he considered fiscal recklessness at the federal level. After that initial blast, the Perot constituency continued to exert a huge impact on politics in subsequent elections.

First, two years after Perot’s 19 percent showing, his constituency wreaked havoc on a Democratic Party moving to the left, under President Bill Clinton, indicating it didn’t take the Perot insurgency seriously. In Tennessee in 1994, the Perot vote broke for the two Republican Senate candidates by a margin of about 75 percent to 20 percent. In Pennsylvania’s Senate race, it was 59 percent to 33 percent. In California’s Senate contest, it was 60 percent to 27 percent. In New York’s gubernatorial race, it was 70 percent to 16 percent.

Then, two years later, the Perot constituency further scrambled up American politics, in response to major missteps by the new Republican House Speaker, Newt Gingrich, and to Clinton’s deft efforts to “triangulate” himself back to a political position much closer to the governing center. This was enough, when Perot ran again in 1996, to swing his vote back to the Democrats in significant numbers. Among independent voters, Perot’s vote share declined from 30 percent in 1992 to 17 percent in 1996; among Democrats, from 13 percent to 5 percent; among self-styled liberals, from 18 percent to 7 percent; among moderates, from 21 percent to 9 percent. Clinton’s vote share among these groups rose by corollary percentages.

What this tells us is that insurgency movements in American politics don’t just fade away. They get absorbed into the mainstream, but only when one party or the other takes steps to make it happen. Consider the George Wallace constituency after his 1968 independent candidacy, when the Alabama governor captured nearly 14 percent of the vote, landed electoral pluralities in five southern states and siphoned off a large proportion of the angry white ethnic vote in America’s big cities of the Northeast and Midwest. That 14 percent Wallace constituency rendered Richard Nixon, that year’s presidential winner, a minority president with just 43 percent of the popular vote.

But Nixon worked hard to absorb the Wallace constituency into his coalition by 1972, and his success in doing so gave him a huge popular-vote majority that year. Ronald Reagan built on that strategy in fashioning his more powerful coalition and transforming the political balance of power in America in the 1980s.

And that is what’s at work with the Tea Party movement today. Janet Hook and Kimberley Strassel have shown just how that process works.