The Great Unraveling of U.S. Policy in the South China Sea 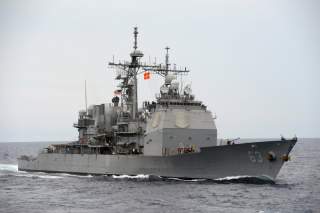 Beijing may be playing coy over whether it considers the South China Sea part of its sovereign territory, but the country’s actions indicate that its preferred outcome is Chinese sovereignty within the “nine-dash line.” Meanwhile, the Obama Administration’s vacillation over how to challenge Beijing’s assertiveness in the region undermines U.S. policy to shape China’s rise in positive directions. The resulting dispute between the Pentagon and the White House over enforcing freedom of navigation has led to a situation—as Assistant Secretary of Defense David Shear testified to Congress—where the U.S. Navy and Air Force have not challenged the territoriality of China’s artificial islands since 2012.

Washington’s unwillingness to enforce the rules it espouses undermines a core tenet of U.S. policy toward China. If the United States will not enforce the policy it espouses, then the time is ripe to reconsider the assumptions and options for U.S. policy towards China. Beijing’s actions in the South China Sea forces the United States to go beyond consideration of American interests in the region towards actively defending those interests.

The U.S. policy of integrating China as a responsible stakeholder in an open, liberal international order rests on three pillars. First, the United States engages the Chinese government and encourages U.S. citizens in commerce and people-to-people exchanges. Second, Washington uses pressure to achieve small results, whether in the release of dissidents, better protection of intellectual property and improvements in China’s proliferation record. Finally, if these efforts fail, then the United States is prepared to deter Chinese behavior that challenges the open, rules-based order Washington wants to uphold in Asia and beyond.

The regional network Washington has tried to build over the years—highlighted by the Asia rebalancing initiatives—cannot substitute for an active U.S. role. China and its civilian, paramilitary and military resources simply cannot be matched by any other claimant state or possibly even a group of states.

Several years ago, Harvard China scholar Alistair Iain Johnston pushed back against what he called the “assertiveness meme” in American discourse about the Chinese. Johnston correctly pointed out that Beijing had not changed its policy objectives nor the levers it would use to achieve its goals. Nothing China is doing in the South China Sea should be surprising; they fall within the stated boundaries of Chinese policy. Buried within the paper was the concession that the China’s willingness to use the full range of tools had increased. Nearly forty years of “shelve disputes, pursue joint development” failed to produce regional acquiescence to extravagant Chinese territorial claims or much development. Even the United States that “[does] the right thing—having first exhausted all possible alternatives” as Winston Churchill said, might have changed a failing policy after so long.

Beijing has taken a variety of unilateral actions—not that the other claimant states are innocent—to cement its claims. Those actions range from establishing the formal municipality of Sansha to encouraging China National Overseas Oil Corporation to explore disputed waters with its new oil rigs. By building more and bigger cutters than every other claimant, China’s coast guard and supporting vessels for protecting maritime rights cannot be challenged except perhaps by military means. When Chinese maritime law enforcement sits on the front lines, Beijing defends its actions with the tautological claim that they are conducting domestic law enforcement operations, which means the incident must have occurred on Chinese territory and therefore the other party is at fault.

China also has built two airstrips on artificial islands in the South China Sea, and is currently in the process of building a third such strip. Although these bases might be vulnerable even to the limited capabilities of other claimants, these airstrips enable Chinese military aircraft to operate much further from home for longer periods of time. Moreover, any foreign navy hoping to operate in the South China Sea will have to consider preemptive strikes against these bases as tensions rise. That’s because of China’s growing anti-ship missile capabilities can hold  those naval forces at risk of attack. That consideration will have to be in the forefront of policymakers’ minds as they consider any deployment.

The change in Chinese will and the broad toolkit Beijing applies make deterrence more challenging, placing pressure on a fundamental assumption of U.S. policy toward China: that U.S. policymakers will be willing and able to enforce the parameters that Washington established. Deterrence almost requires ceding the initiative. Deterrence through punishing transgressions only occurs after the fact, requiring the United States to decide whether to respond. The great German military strategists Carl von Clausewitz observed that war is the choice of the defender, and, by adopting deterrence, Washington has placed itself in the position of needing make the hard decisions while awaiting Chinese initiatives.

The only way for Washington to take the initiative is to adopt a more aggressive approach of deterrence by denial. This would mean placing U.S. military forces more directly in harm’s way and being willing to engage in what the Pentagon considers to be unsafe interceptions of Chinese vessels and aircraft in the South China Sea. Such a policy would appear well outside what most analysts and policymakers would consider to be the acceptable bounds of America’s China policy. This probably is correct; however, this option should not be ruled out summarily so long as deterrence forms one of the pillars of U.S. policy toward China.

The South China Sea has joined cyberspace as a place where the core of U.S. policy toward China is being critically undermined. For years now, the Obama Administration has described China’s cyber activities as a challenge that needed answering. Action, however, has been lacking, even though the White House periodically leaks—most recently, ahead of Xi Jinping’s September state visit—conversations about getting tough, retaliating in cyberspace or imposing sanctions. Deterrence works best when retaliation is practically guaranteed, not when the response is random and when the side trying to deter is willing to accept the costs of not acquiescing.

China policy either needs to be reexamined from its assumptions up or Washington should take steps to reinsert deterrence into the policy mixture. There are enough internal contradictions to justify such a review. However, if U.S. policymakers do not want to act upon one of the three self-stated pillars of their own policy, then such a review is essential. Policy without action is just rhetoric, and empty rhetoric encourages Beijing to view Washington with scorn. A policy of carrots and sticks only works when the stick can be used. Without the stick, it is only a policy of carrots. As the credibility of U.S. deterrence fades, one can imagine Beijing using the playground retort “sticks and stones may break my bones, but words will never hurt me.”