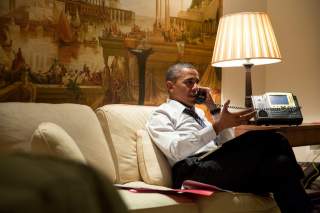 Germany and America are leading Western policy in addressing the Russia-Ukraine crisis. The basic strategy is to support Ukraine and pressure Moscow to halt aggression, while leaving the door open to diplomacy. Sustaining Western unity is essential, but may not be easy to achieve. It could be tested by Ukrainian inaction, the need to bolster aid to its failing economy, a U.S. decision to supply lethal defensive arms to Ukraine, the pull of Western economic interests in Russia or expanded aggression by Moscow.

The Russian intervention in Ukraine and annexation of Crimea have stirred strong objection in the West. German chancellor Angela Merkel has stepped out to lead the West’s efforts to preserve European security. In over thirty meetings and telephone calls with President Vladimir Putin, she has made clear that, as she told the Bundestag on November 26, Russia’s actions threaten “the peaceful international order and breach international law.”

Unlike some of her NATO counterparts, Merkel is signaling that the West is ready for sustained confrontation. At the Bundestag, she called for “staying power to overcome the crisis.” Economic sanctions on Russia were “unavoidable,” even as Germany “[spares] no effort” to seek a diplomatic solution. A Politbarometer public-opinion poll for German ZDF television last week found that support in Germany for Merkel’s position was strengthening.

Through multiple channels, the West has sought dialogue with the Kremlin, and these efforts should continue. But Russia’s barely disguised aggression, amid false narratives about supposed threats to ethnic Russians in eastern Ukraine, has hardened Western attitudes. Russia's recent shows of military force in other areas of the world have helped solidify opinion.

Thus far, the Western response to the Russia-Ukraine crisis is unified, and this must be preserved. Yet challenges to consensus may lie ahead.

First is the issue of financial aid to Ukraine. Ukraine’s economy may well collapse in the next few months without faster reforms and more aid. The new leaders have not yet committed to bold agricultural reforms, privatization of state enterprises, and slashing the size of government and its excessive interference in the economy. Without these changes, the fight against corruption will languish. A recent agreement between Russia and Ukraine on gas supplies, brokered by the EU, will run only until spring. It does nothing to reduce Ukraine's excessive consumption. Gas subsidies amount to over 7 percent of GDP. The six-week delay in forming a new government in Kyiv created concern. Parliamentary blocs are loyal to oligarchs, rather than interest-based political parties. Good governance is far from certain.

Unlike America, Europe has been an especially generous aid provider. Western taxpayers will oppose dispensing more financial aid, however, if Ukraine allows it to disappear into wasteful subsidies, bloated bureaucracy and corrupt hands. A precondition for expanded aid is that Ukraine not slip back into its old corrupt ways, still a significant risk. Putting Western aid monitors on site in Kyiv would help build confidence.

Second, sanctions affecting European economic ties with Russia could spur friction in the West. Next year, EU sanctions against Russia will expire, and Italy and some other southern and eastern members may oppose renewal. Many Western businesses active in Russia chafe at the impact of sanctions on their bottom lines. The U.S. Congress may alienate Europeans by putting into law the Obama administration’s economic sanctions, reducing the freedom to maneuver to negotiate a solution. Slick Russian propaganda could sow discord among Western publics, claiming that America is forcing Europe to punish Russia, but that Europe's interests lie in an early return to business as usual.

These challenges can be overcome. Europe is taking a forceful position despite business ties with Russia and dependence on its gas. What many would consider as Russia’s offense to European values of freedom, rule of law and human dignity is trumping considerable economic interests, especially with Germany. The United Kingdom has supported strong sanctions, despite the potential impact on the financial-services sector. After long hesitation, Paris has shown fortitude in suspending until further notice the transfer to Russia of amphibious warships being built at a struggling French shipyard. Italy is abiding by EU consensus, somewhat reluctantly, despite a weak economy that makes trade with Russia more important. In a December 1 telephone conversation that underlined U.S.-EU cooperation, Obama and new European Council President Donald Tusk "agreed that sanctions against Russia cannot be eased until Russia meets its commitments under the Minsk agreements."

Third, the issue of military support for Ukraine could test Western unity. The Republican takeover of the U.S. Senate, and Democratic sensitivity to the votes of Central and Eastern European diasporas, may persuade President Obama to end his opposition to supplying lethal defensive arms to Ukraine. Senators Carl Levin and James Inhofe, the Democratic and Republican leaders of the Senate Armed Services Committee, have urged this step. A few other NATO allies, such as Lithuania and Poland, may send arms. Providing defensive weapons may help deter further aggression, but some Western allies will likely dissent.

President Petro Poroshenko’s populist call for a referendum at the end of this decade on joining NATO will disappoint many in the West and distract Ukrainians from the urgent tasks of building current military and economic capability. Deepening cooperative ties with NATO makes sense for Ukraine, but not pursuing for now the chimera of membership.

Fourth, any expanded Russian aggression could affect Western unity. Russia might seek to capture the Azov Sea port of Mariupol, or even forge a land bridge to Crimea along the western edge of the Sea. Such actions would require Russia to employ significant armed forces and take large numbers of casualties, which would likely be unpopular at home. A renewed military thrust would give rise to tougher Western sanctions. They would further weaken Russia’s deteriorating economy, already affected by steeply falling oil prices and a severely weakened ruble, and perhaps influencing Putin's cancellation of the planned South Stream gas pipeline. Expanded aggression would impel Europe and America to increase financial and military aid to Ukraine. Some Southern and Central European states, however, might advocate a separate deal with Russia, over the heads of Ukraine’s leaders.

Finally, Westerners could have differing views of negotiations to settle the crisis. Some may see any deal as being “soft” on Russia if it does not force withdrawal of all forces, a halt to support of the rebels and a reversal of the annexation of Crimea. Others may hope for a “realistic” political solution to be achieved through negotiations in the forum led by the Organization for Security and Cooperation in Europe. The September 5 Minsk Protocol ceasefire agreement concluded in that setting, however, lacked enforcement teeth, and both sides have consistently violated it.

The Russia-Ukraine crisis poses the greatest challenge to U.S.-European security cooperation since the end of the Cold War. Leadership from both sides of the Atlantic is essential for an effective response to Russia’s attempt to undermine the European security architecture.

Ian Bond, director of foreign policy at the Centre for European Reform in London, was U.K Ambassador to Latvia.

Michael Haltzel, senior fellow at the Center for Transatlantic Relations of the Johns Hopkins University’s School of Advanced International Studies, was staff director of the Senate Foreign Relations Committee’s Subcommittee on European Affairs.