The Gulf Split: Why the GCC May Be Breaking Up 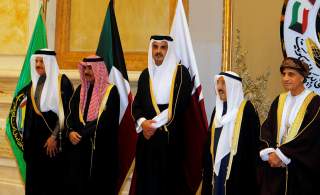 The leaders of Saudi Arabia, the United Arab Emirates (UAE) and Bahrain refrained from attending and sent lower ranking officials. They have severed diplomatic relations with Qatar since June 5 because of allegations that Doha is funding terrorism and has relations with Iran.

Oman, as usual, sent a royal representative of Sultan Qaboos bin Said who, for health reasons, has not attended similar and other seances for about a decade.

If a meeting’s success is determined at least partly by the level of official representation, then the GCC’s thirty-eighth summit failed to satisfy a basic requirement.

Sheikh Sabah is also said to have quickly wrapped up the summit’s only session after fifteen minutes of what can be imagined to have been a tense closed-door get-together. This came after an earlier inconclusive meeting of GCC foreign ministers, who customarily iron out issues before the leaders’ final communique.

It further looked as if the communique had been pre-written to emphasize everyone’s desire for continuing collective action in the interest of GCC peoples.

As host of the summit and mediator in the GCC crisis pitting Saudi Arabia, the UAE and Bahrain against Qatar, Sheikh Sabah was in a very difficult position. His abrupt ending of the meeting was most likely meant to accomplish two important missions: preserve a modicum of unity within the GCC and salvage Kuwait’s reputation as host.

Appearances aside, perhaps the GCC’s death was pronounced a short while before the Kuwait meeting when the UAE announced the formation of an Emirati-Saudi political and military alliance. For two of the GCC’s richest and most powerful and influential members to decide to establish a new organizational structure is enough prognosis at this critical juncture.

That Bahrain––normally the duo’s partner––is not a member of the new entity means that the UAE and Saudi Arabia want to be alone in deciding Arabian Peninsula affairs. Both consider the GCC too unwieldy for the foreign policy preferences of  Crown Princes Mohammed bin Zayed (UAE) and Mohammed bin Salman (Saudi Arabia).

Both men are currently leading the effort to isolate Qatar regionally and internationally. Among the GCC states, only Bahrain––a small island nation fully dependent on Saudi Arabia––has joined them in boycotting Doha. Kuwait and Oman have opted to remain neutral.

Saudi Arabia and the UAE lead an Arab coalition in Yemen against a now-defunct alliance between Houthi rebels and partisans of former, now dead, President Ali Abdullah Saleh. Saudi and Emirati military operations have so far yielded scant success but have caused a humanitarian crisis.

An important issue weighing on the unity of the GCC and aiding the establishment of a new alliance is that of Iran. Abu Dhabi, Riyadh and Manama (Bahrain) consider the Islamic Republic to be an existential threat and desire a unified GCC front to confront it.

Oman, Kuwait and Qatar have differing degrees of dealings with Iran, although not at the expense of the GCC. They think that opening the door for dialogue with the Islamic Republic may pave the way for sectarian, political and military de-escalation with it.

For these reasons, it is not hard to surmise that both Saudi Arabia and the UAE may see that the GCC is just an obstacle in their way. Doing away with it, they reason, may very well be the right choice now.

Nevertheless, dismantling the GCC would be a short-sighted and ill-advised decision given current conditions in the Arabian Peninsula.

Militarily, it is impossible to defend against the purported Iranian threat without the cooperation of Kuwait, Qatar and Oman. Integration of command structures of all GCC states and overcoming interoperability problems are essential for defense.

Politically, all GCC monarchies have essentially the same structure, except for Kuwait, which enjoys a semi-democratic constitutional arrangement. Stability and order benefit all. This has generally also been the basis of their relationship with the international community.

Economically and socially, GCC states have similar social contracts between rulers and the ruled. They all need similar economic diversification programs that can ameliorate problems of unemployment and dependence on rent relations.

Much economic integration has been accomplished in the GCC’s 36-year history. These include labor policies, a common market, freedom of movement, tariffs and others.

It would be folly to do away with the entente that has defined the region’s global relations. What is required is for the absent leaders at the latest GCC summit meeting to reevaluate their ill-advised positions in the interest of collective action.

Imad K. Harb is the director of research and analysis at the Arab Center in Washington, DC.