The Hague Has Ruled against China. Time to Enforce It. 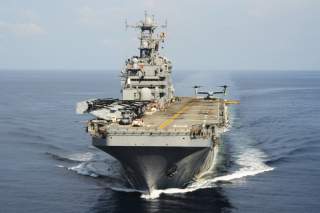 Today’s ruling of the UNCLOS Arbitral Tribunal on the territorial disputes between the Philippines and China offers two paths forward for China, and the Asia-Pacific region more broadly. How China chooses to respond to the tribunal’s judgement, which sided against Beijing’s claims on key counts, will do much to determine the course of Asian security and the post-1945 international order in the decades to come.

Since World War II, the United States and its global partners have sought to cement an international framework that prizes peaceful resolution of disputes, adherence to international laws and norms, and rejects the use of coercive force to achieve national objectives. This order, built out of the ashes of two devastating world wars, has contributed mightily to the growing prosperity of China and the Asia-Pacific region, as well as the absence of open warfare between Great Powers over the past seventy years.

Despite China’s repeated claims of wishing to become a “responsible stakeholder” on the world stage, China’s recent behavior represents the most serious threat to this order since the collapse of the Soviet Union. China’s economic clout, expanding military reach and capabilities, and Orwellian insistence that it is always the victim of others’ aggressive intentions pose an especially difficult challenge for an international system.

This challenge has been particularly acute in managing Beijing’s territorial disputes with its neighbors. From the East China Sea to the South China Sea to China’s disputed land borders with India, Beijing has undertaken a systematic campaign to change the facts on the ground through coercion. Whether constructing artificial features in the South China Sea to strengthen its claims, declaring illegitimate Air Defense Identification Zones (ADIZ) in the East China Sea, or repeatedly engaging in provocative militarily behavior near the Indian territory of Arunachal Pradesh, Beijing has repeatedly shown itself to subscribe to the “might-makes-right” school of international politics.

Today’s ruling is a fundamental rebuke to Beijing, not simply on the facts of the case but simply by the manner in which the decision was reached. The Philippines’ decision to bring its claims before the UNCLOS tribunal is in keeping with the principles and values that have animated the United States and its partners in the postwar world. That a small, developing nation like the Philippines can successfully appeal to international law and norms against the Chinese colossus is a powerful rebuttal to the famous words of China’s former foreign minister, who stated that “China is a big country and other countries are small countries, and that’s just a fact” in justifying Beijing’s belligerency.

Should China choose to ignore this ruling, it will show once and for all the hollowness of its pledges to act as a constructive member of the international community. But it will also pose a serious threat to the international order itself: the world’s second-largest economy and largest military openly repudiating the liberal international order, including the peaceful resolution of disputes. The consequences for international security will be profound, and Beijing’s response will be watched intently in Moscow, Tehran and Pyongyang.

Now is the time for the United States to stiffen its resolve in preparation for China’s potential refusal to accept the ruling, or perhaps to even seek a military solution to its disputes with Manila. The administration’s dispatch of two Carrier Strike Groups to the region in recent weeks has been the appropriate response thus far. Should China respond rashly to the ruling, Washington should leave no doubt about its intention to stand with our treaty allies and partners to resist aggression and uphold both our values and interests.

The tribunal decision is an inflection point in the history of China’s rise, representing the most notable clash yet between the values animating the post-1945 international system and Beijing’s revisionist approach to world affairs. While it is up to China how it chooses to respond to this decision, the United States has only one option: to stand resolutely with our friends in the Philippines and across the region in defense of universal values and the belief that no country, no matter the size of its military or GDP, is above the law.